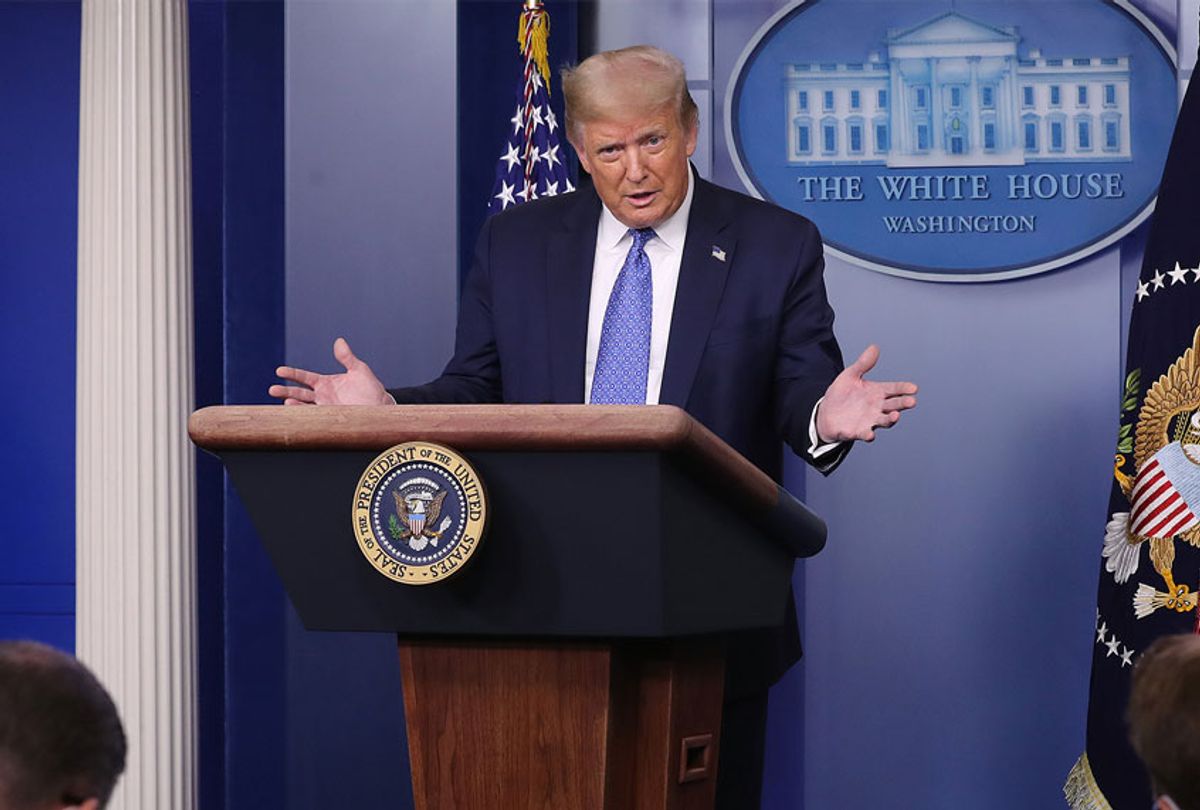 If you were to choose a single word to describe the effect of Donald Trump's presidency on the state of health care in America, that word might be "devastating." From undermining faith in established experts and best practices to his failure to follow even basic protocols amid a global pandemic, Trump has led a freewheeling attack on medical science. It could take years to undo some of the worst effects.

"That's a great question – one I worry about myself," said Dr. Jeanne Noble, who heads the COVID-19 response unit at the University of California, San Francisco Medical Center emergency department. "Hopefully there are not several more landmines that will explode between now and January."

That sense of worry consistently emerges in interviews and email exchanges with medical, science and policy experts. Here are some of the concerns over ways Trump could still affect health care in the U.S. before his administration's run comes to an end.

Distribution of a vaccine. On November 12 President-elect Joe Biden's incoming chief of staff, Ron Klain, told MSNBC that Trump's ongoing refusal to acknowledge the election results may hamper the new Biden administration's ability to hit the ground running with a national vaccination plan in January.

The New York Times reported that Biden advisers know very little about Warp Speed, the Trump administration's program to get a vaccine distributed to Americans once it's approved. Under a normal presidential transition of power, Biden staffers would have access to details and documents about such programs.

"Right now – right now – there are officials inside the Department of Health and Human Services who are busy planning a vaccination campaign for the months of February and March, when Joe Biden will be president," said Klain. "The sooner we can get our transition experts into the meetings with the folks who are planning the vaccination campaign, the more seamless the transition."

Administrative havoc. Trump toyed publicly with the idea of firing Dr. Anthony Fauci, perhaps the most trusted voice on COVID-19 messaging, before the election. If he decides to follow through, even just for spite, it could prompt a massive rift at the National Institutes of Health during a period in which U.S. infection rates have soared to all-time highs.

Technically, Trump can't fire Fauci, so he'd have to get the director of the NIH, Francis Collins, to do it. Collins has said several times that he will neither fire nor demote Fauci, whose constantly sought advice on mask wearing and social distancing irritates the safety defiant Trump. To get to Fauci, Trump might first have to fire Collins and install a puppet interim director, which would throw the institutes into open chaos at a time when a coordinated national policy is desperately needed.

It's also possible that Food and Drug Administration commissioner Stephen Hahn's days are numbered, again without an obvious successor. The Washington Post reported that the White House was upset with Hahn for allowing FDA staff-written guidance on vaccine policy to go forward; the guidance, which included a careful timetable for vaccine approval, made it all but impossible for a COVID vaccine to be approved by Election Day.

Ongoing equipment shortages. As the country attempts to manage the massive spike in virus cases, its health providers in some areas once again find themselves on the brink of crisis when it comes to having sufficient personal protective equipment (PPE) for their doctors, nurses and patients. Trump, unfortunately, retains the capacity to inflame that crisis.

"U.S. and global demand for PPE continues to far exceed supply for the entire industry," a spokesperson for 3M Company told CBS. The company is the leading manufacturer of the N95 masks that are preferred at most hospitals, clinics, nursing homes and the like.

In such emergencies, state and local health officials often look to the government for relief. But according to the New York Times, the Trump administration's Strategic National Stockpile has amassed only 115 million N95 masks — far short of the 300 million officials had said they planned to place in reserve. And Trump, by all accounts, will continue to refuse to invoke the Defense Protection Act to ramp up production.

COVID money for private schools. Politico reported that among the 15 or so moves Trump might make via executive order before leaving office, one would seek to allocate COVID-19 school relief money directly to parents, a sort of end-around the CARES Act that would allow the money ultimately to flow to private schools instead of the public school systems for which it was intended.

It's a stunt that Trump's education secretary, Betsy DeVos, already has attempted several times, to no avail. Most recently, a federal court judge blocked private schools from accessing the $13 billion set aside for K-12 education in the CARES Act and nullified rules DeVos had tried to impose to facilitate that access.

The ruling said that the COVID school money included in the relief package was clearly and unambiguously meant to be disbursed with a focus on low income students. DeVos had tried to steer it to private and parochial schools on the basis of their total populations instead.

Even if Trump signs an executive order, it's not clear how much weight it would carry. Traditionally, E.O.s are seen as more symbolic than legally binding. Still, undoing it would be a time-consuming task for Joe Biden and his staff, and it couldn't happen until Jan. 20 at the earliest.

Dangerous COVID-19 messaging. Although Trump will only be in office about nine weeks longer, they could be disastrous weeks for the country with regard to the virus, in part because he will continue to refuse to observe social distancing or wear a mask – or urge others to do so.

"Mask wearing is as effective as a vaccine, statistically speaking," said Dr. Noble. "If people would wear them universally, that brings a reduction in transmission of around 70% to 80%, which is on par with a really effective vaccine. It's sad, because that has been at our disposal – and we've been encouraging mask use since March."

But despite his own White House being all but on fire with infection, Trump continues to demur. "He can't back off now," said a New York-based physician. "He's put too much into that to back off."

Refusal to transfer power. Well beyond being a self-serving publicity stunt, Trump's continued intransigence means that Biden cannot access vital government agencies, officials and information. That includes everything the White House is doing – and not doing – to contain the pandemic or address any of the other health issues facing Americans.

While that process plays itself out, physicians around the country go about their jobs – but they also know that time is wasting. "This is just going to make it that much more difficult [for Biden's health administration] to get up and running," said Dr. Jorge Nieva, of the University of Southern California's Keck School of Medicine. "It's just very unfortunate."