"We’re going into a very dark winter," says Biden. By spring there could be half a million COVID American deaths 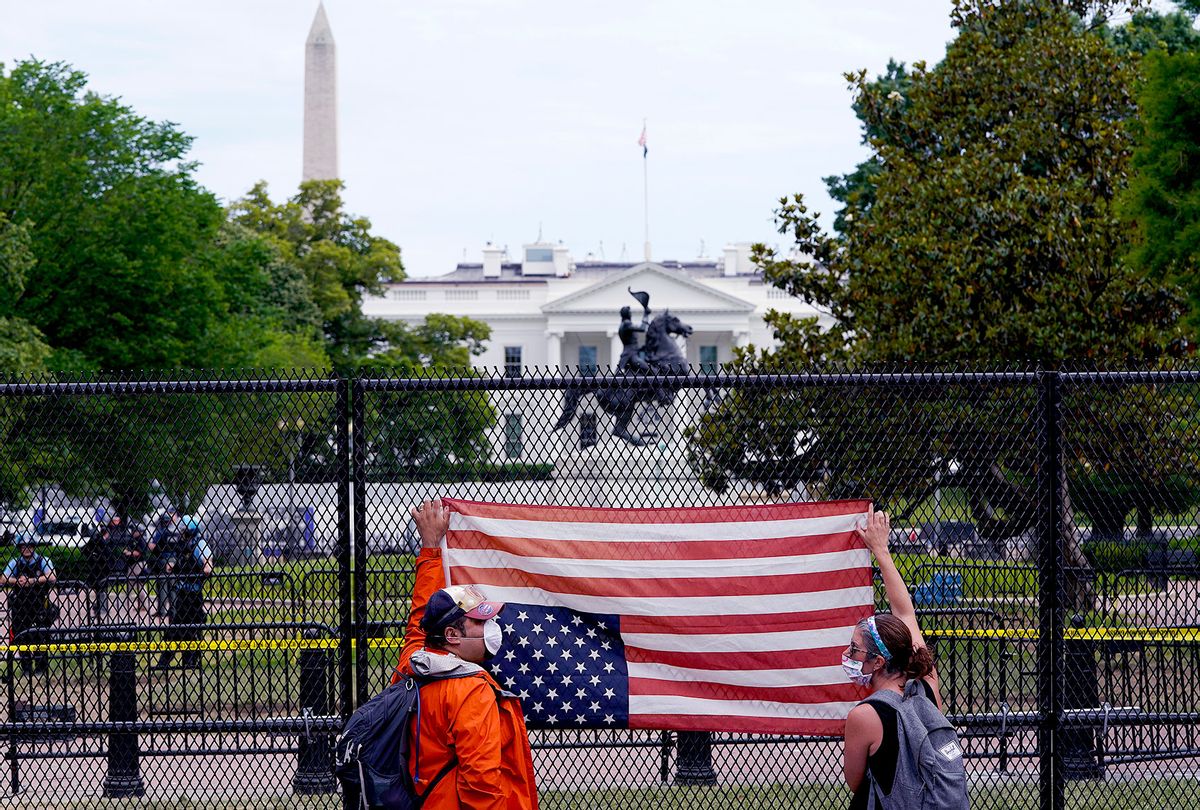 Demonstrators hold an upside down American flag against a tall fence at Lafayette Park near the White House while protesting against police brutality and the death of George Floyd, on June 2, 2020 in Washington, DC. Protests continue to be held in cities throughout the country over the death of George Floyd, a black man who was killed in police custody in Minneapolis on May 25. (Drew Angerer/Getty Images)
--

In Iowa, nearly 40% of nursing homes say they don't have a one-week supply of all personal protective equipment types, or PPE. About 40% of the doctors polled in New Yorksay the wait to obtain PPE is running at least a month. And in a national survey of nurses, only 18% of those working in hospitals say their facilities have made any preparations for surge capacity and planning.

The statistical evidence is overwhelming: Americans are on the front edge of a surge in COVID-19 cases that will strain hospitals and care facilities like nothing the country has yet experienced. But from all indications, the efforts to meet that crisis will be hampered by slow-reaction planning and, significantly, inadequate protection.

"We're going into a very dark winter," President-elect Joe Biden said Monday, renewing his call for Americans to follow COVID-19 safety practices and asking the Trump administration to allow Biden's team access to critical health agencies and information. "Things are going to get much tougher before they get easier."

Almost 10 months after the first confirmed COVID case in the U.S., the scope of the problem is again worth considering. According to the Centers for Disease Control (CDC) COVID-19 Tracker on Nov. 16, the total of those infected since Jan. 21 had surged to nearly 11 million, with 245,470 deaths reported. Over the previous seven days alone, the number of new cases was 1.07 million.

You don't need a map to see where it's all going. In the absence of federal leadership from Trump's team, and with large scale efforts to control COVID-19 left largely to state and local governing bodies, the U.S. has never fully escaped the grip of the virus. Now, what physicians and epidemiologists have long predicted is coming to pass: Colder weather and the traditional flu season are combining to rapidly escalate the spread of disease.

That escalation hits hardest in two ways. The first, to put it bluntly, is the body count. The University of Washington's Institute for Health Metrics and Evaluation is now projecting that U.S. deaths from the coronavirus will total 438,941 by March 1, 2021, about six weeks after Biden is sworn into office. That would be more Americans than died in World War II, or more than double the total of deaths from the Vietnam War, Korean War, World War I, the 9/11 terrorist attacks and Pearl Harbor combined.

The second area of impact is frightening in its own right. Health experts and policymakers alike agree that this new surge in viral load will buckle the nation's care systems, which in some areas are already near or at capacity in their intensive care units. Very simply, hospitals and clinics are going to run out of room – fast.

The mayor of Tulsa recently announced that regional hospitals were being pressed into service after his city ran out of ICU beds. Officials in El Paso, meanwhile, continue to bring in mobile morgue units and hire inmates to help move bodies to those holding areas. Wisconsin used the state fairgrounds to open a field hospital after facilities around the state said they'd reached ICU capacity.

Even with adequate bed space, though, the lack of PPE is an ongoing concern to doctors and nurses alike. A survey by the Medical Society of the State of New York, for example, found that nearly two-thirds of responding doctors said they at least sometimes find it hard to obtain PPE, and a third of them said access and affordability issues are affecting their ability to care for patients. That's basic protective gear.

"In California, it's improved dramatically, (but) that is based on state action," said Dr. Jeanne Noble, who directs the COVID response unit at the University of California, San Francisco, hospital's emergency department. "It hasn't improved throughout the country. There are still places that don't have enough PPE."

That was underscored dramatically by a recent survey of more than 15,000 registered nurses by National Nurses United, the union that represents them. (Disclosure: The union is a financial supporter of this site.) More than 80% of the nurses who responded said they had reused at least one type of PPE that was designed for a single use, and one-fifth of nurses in hospitals said their employer had recently limited the use of N95 respirator masks, the gold standard for safety among medical workers.

Just 16.5% of RNs in hospitals said they have universal PPE — that is, protective gear (including eyewear) that is to be used at all times — in their emergency departments, where patients may not be screened for the virus before receiving care.

"More than 240 registered nurses have died from COVID-19," said Bonnie Castillo, executive director of the union. "Nurses need PPE now to do their jobs safely."

Biden has said that his administration will invoke the Defense Production Act in order to ramp up U.S. manufacturing of PPE, a step that Trump has largely avoided and one that could get badly needed supplies to hospitals and clinics, including those that lack the buying power of the largest health industry chains.

That help would be particularly felt in America's nursing homes, which have suffered tremendously from lack of PPE supply. A study by the U.S. Public Interest Research Group found that in late August, 20% of nursing facilities had less than a one-week supply of one or more types of PPE, which constitutes a critical shortage by industry standards.

Still, Biden does not take office for two months. And the intervening weeks could be dire ones.

"[In the spring], we in a 24-hour period burned through what we had prognosticated was a six month supply of N95s," Dr. Noble said. "That's how hard it is to predict. There are finite reserves. The devil will be in the details."