Enough cowardice: Democrats must forge ahead, without caring what the Trumpers say

Trump's delusional supporters will rage and scream no matter what. Democrats should quit trying to make peace 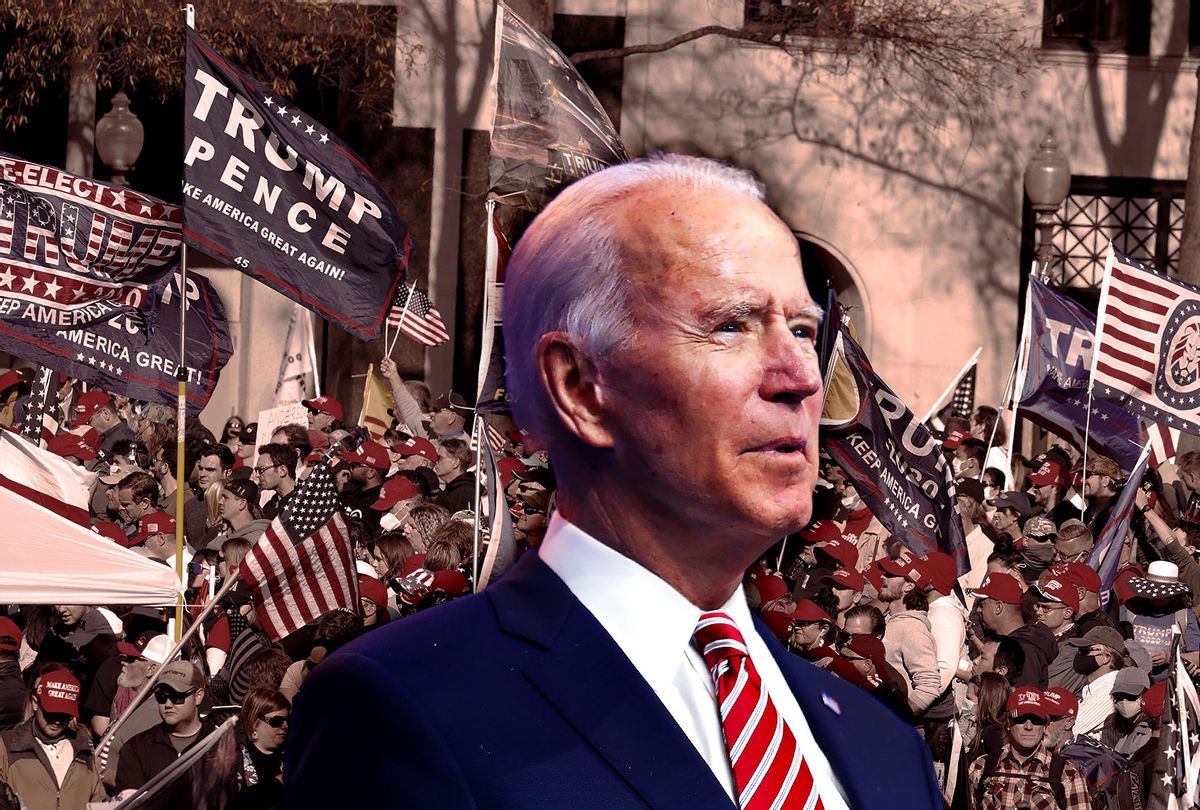 Even after the landslide defeat of Donald Trump, Republicans across the board continue to be terrified by Trump's disciples. Fear of the Red Hats has always been one of the primary reasons why the rest of Trump's party has refused to speak out against his ongoing horror show. It's not the only reason, but it's one of the more potent ones.

It's fascinating to observe how thoroughly they've painted themselves into a corner. While leading Republicans are in love with Trump's policies, not to mention the cover the Red Hats gave them to pass their agenda, they're privately disgusted by the president's total lack of personal restraint and constant self-sabotage.

The dispiriting enormity of Trump's following (73.8 million in this election) means the rest of the GOP can't win without the Trumpers. So Republicans routinely clam up whenever Trump crosses another Rubicon — thousands and thousands of Rubicons at this point. By clamming up, they empower Trump to curb-stomp more and more of our democratic values, while they quiver in the corner afraid of Trump deploying his Red Hats against them in another late-night tweetstorm. They're locked in a MAGA-induced torpor, unable to act even if they wanted to. After four years of irreparable damage to the country, they're impotent and powerless to stop this weirdo tyrant as he annihilates the integrity of our elections — tweet by tweet, and frivolous lawsuit after hilariously frivolous lawsuit.

While it's pathetic, infuriating and completely unpatriotic, I at least understand why they're doing it. What I don't understand is why the Normals are afraid of Trump's Red Hats, too.

Even before the 2020 election, Democratic leaders, as well as select cable news pundits, have too often repeated a variation on: "Don't do [x] because it'll make Trump's supporters angry." It's been trotted out as an excuse for not impeaching Trump and for pardoning Trump, and as a reason to argue against prosecuting Trump and his henchmen after the new administration is sworn in. Fear of the Red Hats is possibly why NBC News' Chuck Todd felt obligated this past weekend to refer to Joe Biden as the "apparent winner" of the election, days and days after Biden was declared the actual winner of the election by Todd's own network. Simply put: The truth and integrity of the press is being subverted by an irrational fear of screeching Twitter trolls who don't know the difference between "they're," "there" and "their."

Elsewhere, George Washington University Law School professor Randall Eliason published an opinion piece for the Washington Post in which he argued that prosecuting Trump would be a catastrophic error, noting, "Trump and his supporters would inevitably characterize any investigations as a corrupt attempt by the Biden administration to 'take out' a potential 2024 rival." The only response to this is: So what? They're doing that today with the 2020 election. What's another knee-jerk grievance on top of all the others?

Eliason isn't the only one. There will be many more with similarly serious warnings. And the emerging conventional wisdom on this front is entirely based on a fear of the Red Hats and their incoherent rage.

The tragic reality of the Biden years will be this: The Red Hats are going to scream about literally everything anyway. They already are. History has taught us that appeasement only makes the aggressor more aggressive, and trying to unilaterally play nice will only end in unilateral pantsing. In their deluded, brainwashed minds, Biden stole the election from Trump, while professional stooges like Charlie Kirk and Breitbart are already hyping up their fanboys about inevitable "persecutions" that will follow. Ivanka Trump, meanwhile, has expressed outrage over the New York attorney general's comprehensive investigation into Trump's alleged financial crimes. Fox News and the other pro-Trump propaganda outlets will link Biden to all of it, whether Biden wants to be linked or not.

If they don't have actual Biden scandals to latch onto, they'll make 'em up. And since they'll indiscriminately lose their shpadoinkle anyway, why not uphold the rule of law and proceed forward with accountability — whether in the form of bipartisan commissions, congressional reports or actual grand jury indictments? In other words, rather than refusing to investigate anyone and being accused of investigating everyone, why not damn the torpedoes and proceed, full steam ahead? Again, stop fearing what they'll say and just do the damn thing.

Trump's actions have been unprecedented, including the fact that he himself broke the tradition of not investigating previous administrations when he ordered Bill Barr and U.S. attorney John Durham to investigate Barack Obama and "the oranges" of the FBI's Crossfire Hurricane probe. (Notice how the Republicans never flinched over the liberal response to the Durham investigation.) Unprecedented crimes deserve bold, unwavering accountability.

We've never had a president so flagrantly violate the law on countless occasions, from a dozen instances of obstruction of justice enumerated in the Mueller report to Trump's extortion plot in the Ukraine debacle that led to his impeachment. His negligence in the face of the pandemic alone should warrant extensive investigation, and there are myriad other crimes likely waiting to be discovered. Should there be civil or criminal accountability for deliberately deceiving the public on the threat of the pandemic, as revealed by Bob Woodward? What happens if evidence is uncovered that Trump sold national security secrets to an enemy?

Unprecedented times deserve unprecedented accountability. Walking away and burying the past in the past is an excellent way to guarantee another Trump in the future — likely one who's worse than the first Trump.

Americans tend to respond to strong, unflinching leadership, and tend to condemn weakness and half-measures. So whether it's the incoming attorney general or a congressional committee or a state and local probe, if the evidence leads to indictments, Democrats should just own it and ignore the shrieking. The Lincoln Project's Rick Wilson once said, "[Mitch McConnell] doesn't care about screaming." The Democrats on both ends of Pennsylvania Avenue would do well to employ the same strategy. Hold fast, power through and stop caring about the screaming.

After all, while there are nearly 74 million Trumpers, there are 80 million Biden voters.

Since 2015, Trump supporters have shown us who they really are. We've learned that they'll go along with whatever the world's most notorious con man says, no matter how ignorant, no matter how destructive, no matter how contradictory. They will continue to gratuitously worsen the spread of the pandemic, and they will absolutely continue to repeat counterfactual gibberish fed to them by the conservative entertainment complex, including dozens of made-up reasons to impeach Biden. They'll never see the light. They'll never accept an olive branch. They're gone.

Given all this, we need to stop fearing these people. If the evidence points to prosecutions, then we need to encourage the investigators to prosecute. When the next election rolls around, we need to give our leaders, including Joe Biden, the electoral cover they need by prioritizing winning at all costs. That, and a series of post-Trump reforms, is the only way to course-correct the trajectory of the republic. Cowardice will only make matters worse.