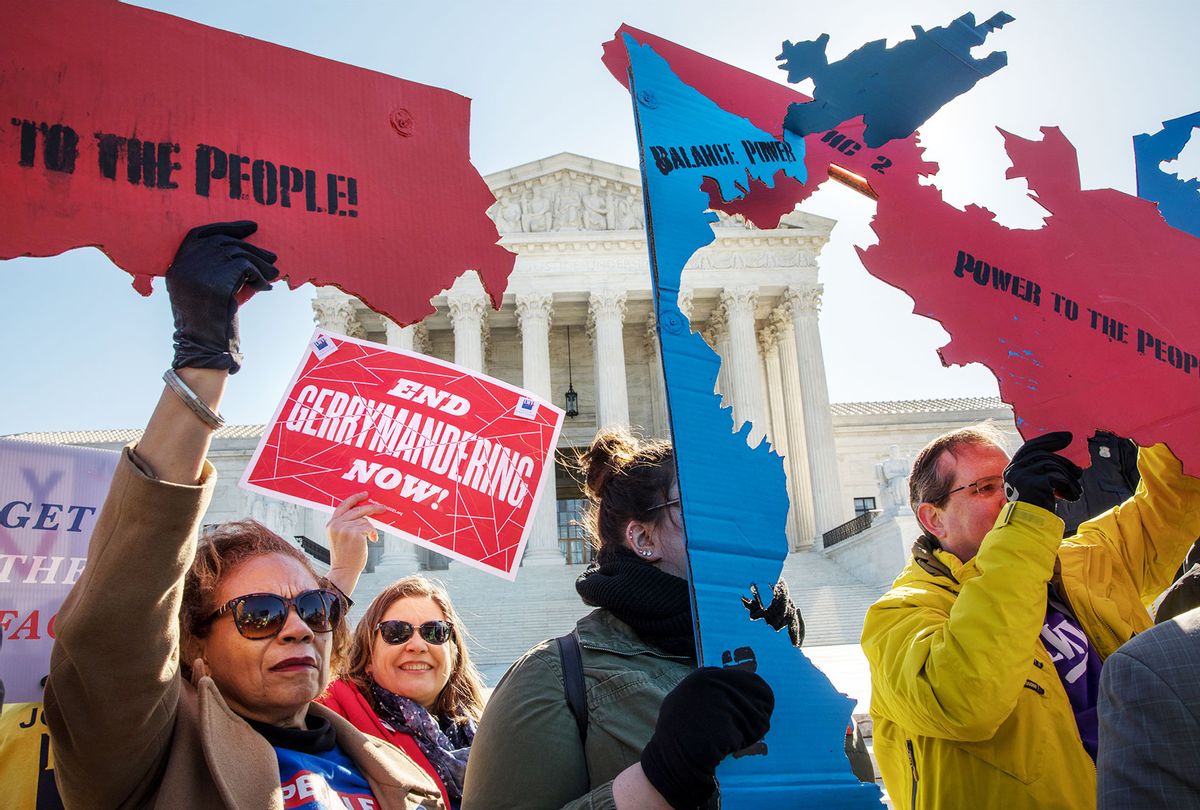 Demonstrators protest against gerrymandering at a rally at the Supreme Court during the gerrymandering cases Lamone v. Benisek and Rucho v. Common Cause. (Evelyn Hockstein/For The Washington Post via Getty Images)
--

The Republican Party is poised to cement its hold on power in state legislatures and the U.S. House of Representatives after winning nearly every election in which the power to redraw legislative maps was at stake.

Despite winning the White House and still holding a shot at gaining a majority in both chambers of Congress, Democratic losses in state legislative elections across the country gave Republicans far more power to redistrict, or gerrymander, districts following the census next year.

The census is already expected to cost states like New York, California and Illinois congressional seats while giving a big boost to states like Texas, Florida and Arizona. Furthermore, Republicans will have the power to redistrict far more seats than Democrats.

Democrats spent hundreds of millions targeting state legislative races but lost nearly every state where control over redistricting was at stake. Republicans were able to hold on to their majority in Texas, fended off Democrats in Pennsylvania, retained their majority in North Carolina, upset Democrats to hold on to the Minnesota state Senate, kept control of the Iowa state House, maintained their supermajorities in Kansas, and flipped the state Senate and House in New Hampshire. Missouri also re-elected Gov. Mike Parson, maintaining Republican control of the state's redistricting process, and Virginia voters passed an amendment that gives a bipartisan commission rather than the Democratic state legislature the power to redraw maps.

The lone exception could be New York, where Democrats may still win a supermajority in the state Senate once all the votes are counted.

These wins across the country put Republicans in a similar position as they were after the 2010 Republican wave that resulted in the most biased House map against Democrats in modern history. For years, Republicans have been able to win control of the U.S. House and state legislatures despite losing the popular vote.

Though some states have shifted redistricting power to independent commissions or bipartisan panels, only about 38% of House seats will be left up to such panels, compared to 33% in 2011, according to FiveThirtyEight.

"This will put the Republican Party in a position where we're able to secure a decade of power across the country," Austin Chambers, president of the Republican State Leadership Committee, told reporters after the election, according to the Washington Post. "It's something that the Democrats were desperate for, and they came up well short."

Democrats, who have sniped at each other over the party's disappointing election slate, made the battle for control of legislative maps a top priority ahead of the election after losing over 900 legislative seats since 2011.

"Democrats didn't focus on those state legislative races to the extent that we should have in 2010," former Attorney General Eric Holder, who now heads the National Democratic Redistricting Committee, said ahead of the election. "As a result, the 2011 redistricting went well for the Republicans and led to the gerrymandering that we have seen, and that has affected our politics over the course of this last decade. I think Democrats are focusing now on state-level races."

But after the election, Holder's group sought to downplay the losses by pointing to states that changed their rules on redistricting since 2011.

"People are focused on Democrats not making gains in 2020, but we measure this by where we were a decade ago," Patrick Rodenbush, a spokesman for the group, told the Post. "We've reduced the total number of seats drawn entirely by Republican legislatures and governors from 213 in 2011 to 175 in 2021, and that's before the census."

Grassroots groups echoed that sentiment, arguing that Democrats "are going into the next redistricting cycle in a better position, at least in some states."

"Over the last few years, we have been able to defeat Republican trifectas and supermajorities, along with passing fair districting reform measures," Lyzz Schwegler, the co-founder of Sister District, a volunteer group that aims to end gerrymandering, told Salon. "For instance, in 2011 the GOP had trifecta control of Michigan and Pennsylvania. Going into this cycle, Democrats control at least one branch of government in both of those states. Wins in 2018 broke GOP supermajorities in both chambers in North Carolina, the Pennsylvania Senate and the Michigan Senate. And wins this year kept the GOP from gaining supermajorities in either of Wisconsin's chambers."

Even with slightly less influence overall, Republicans will be able to continue to hold on to power in some states despite losing the popular vote. In 2018, Democrats won just three of Wisconsin's eight U.S. House seats despite winning 200,000 more votes than their Republican counterparts. In Texas, Democrats won 47% of the vote in U.S. House races but won just 13 of the state's 36 seats.

Christina Polizzi, a spokeswoman for the Democratic Legislative Campaign Committee, blamed the existing gerrymandered maps for the party's disappointing election.

"An unexpected surge of Trump support helped carry Republican legislative candidates over the line. Legislative Republicans won because Donald Trump over-performed. It's easy to win in rigged districts. While Biden won decisively, to win a majority of districts, Democratic candidates needed to outperform the top of the ticket to win," she said in a statement to Salon. "Gerrymandering had a huge impact. In our target states like Michigan, Pennsylvania and North Carolina, the maps were deliberately drawn so Republicans could withstand even the bluest wave to win. In these states, Republican wins in 2010 allowed them to subvert our democracy and lock in minority rule."

After failing to capture the legislatures they targeted despite sinking copious sums of money into the races, Democrats will now have to rely on the courts and a growing grassroots movement to push back on Republican redistricting.

"In 2010, Republicans caught us off guard. This time, we know what's coming and we understand their playbook — we aren't going to let them get away with another decade of rigged districts," Polizzi said. "We are going to fight tooth and nail for fair maps. It's a decade later — in North Carolina, for example, we have fair courts that could stop obvious Republican gerrymanders. We will also have fairer maps in Michigan because they passed an independent redistricting commission."

Michael Li, senior counsel for the Democracy Program of the Brennan Center for Justice at New York University Law School, predicted that Republican efforts will particularly focus on southern states.

"Democrats fell short of winning any of the chambers they were targeting there in the last two cycles in states like Georgia, Texas, Florida and North Carolina," he told NBC, "so there's still a lot of potential for abuse there, because there are fewer protections this time around. I think the South in a lot of ways will be the redistricting hot spot of this cycle."

Li said he expects numerous court battles over potential redistricting abuses as well as challenges over the census itself.

Democrats have long challenged Trump's attempts to exclude some immigrants from the count and cut short the counting period amid the coronavirus pandemic. But even if courts side with Democrats, there is little that could be done once the census is complete.

"There have been cases where people have tried to get the bureau to make changes, but it's really hard," Li said. "You can't redo the census easily, for instance, so trying to figure out a remedy is going to be a challenge."

Republicans do not seem particularly worried about legal challenges.

"In North Carolina alone, we've been through, what, 17 lawsuits over the legislative and congressional maps just this decade? All that money spent on those lawsuits, and it didn't yield them a majority in anything — the Senate, the House or in Congress," Adam Kincaid, head of the National Republican Redistricting Trust, told NBC News. "But Democrats do this and do it over and over again. The way we talk about it is Democrats see a state they want and sue until it's blue."

The Supreme Court last year also made it more difficult to challenge partisan gerrymanders, ruling in a 5-4 decision that federal courts have no power to hear such cases.

Schwegler argued that the next decade of battles over fair maps would be different "because of increased public awareness in the importance of ending gerrymandering and the growth of organizations that are dedicated to the cause."

"We will continue with our mission of getting Democrats elected to strategic state legislative seats," she said. "The more progressive power we are able to build at the state level, the more influence we will have over critical fights including health care reform, reproductive freedom, gun reform, environmental regulation, voting rights and many other legislative fights."