I ditched my microwave three years ago and never looked back

Weaning myself from the microwave was surprisingly easy, but also led to being happier and healthier than before 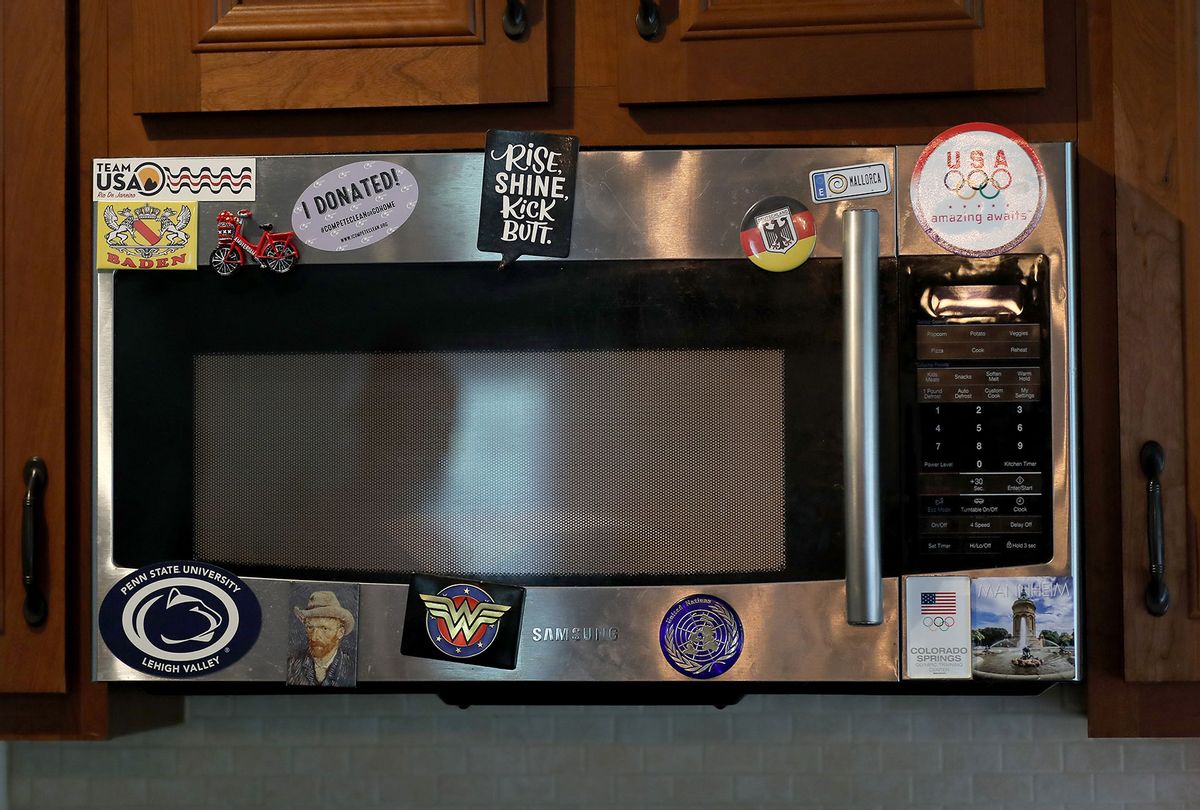 Microwave of Olympic hopeful cyclist Mandy Marquardt is seen in between training sessions in her home on June 02, 2020 in Allentown, Pennsylvania (Elsa/Getty Images)
--

As I unpacked the kitchen in my new house three years ago — the first place I'd ever moved into on my own — I went down a mental checklist. Plates? Check. Silverware? Check. Rice cooker? Check. A single sauce pan? Check.

I felt like something was missing and I realized — I didn't own a microwave. Microwaves — a staple of my lifestyle and most kitchens — had always been conveniently available to me, either via a roommate or built into the cabinets of the place I was renting.

Now, I considered if I really needed to drop $80 on a reliable machine. Maybe I could get by without one for a while. Or maybe I didn't need one at all.

I'd been reliant on microwaves since my time as a latchkey kid, punching buttons more and more frequently after I left my parents' home with very little knowledge about how to cook for myself. And over all of those years, the microwave had become a tool and scapegoat for an endless variety of disordered eating practices.

The microwave was, after all, the key component for meals that promised pre-portioned sections of the food pyramid, calories carefully measured to curb your carb intake but not your hunger.

When those failed, the pendulum would swing to the other side. The microwave quickly warmed up a plate of lackluster frozen wares — pizza rolls, pre-cooked chicken, faux-gourmet bags from the bins at Trader Joe's, and anything that could be reasonably called a hot sandwich.

I'd make myself a subpar meal and, unsatisfied, convince myself that I was still hungry, falling victim to a bingeing habit I hadn't fully identified yet. And then I'd be miserable after, uncomfortable and regretful and still not happy with what I'd eaten.

I considered the alternative to my microwave:  the oven. Would life be worse if I had to wait 20 minutes for pizza rolls, instead of two? No, I decided — if I really wanted them, I'd be willing to wait through the preheat for them. Besides, they're better crispy from the sheet pan than soggy and stuck to the plate.

I didn't buy the microwave.

The en masse adoption of the microwave and other appliances to American households helped to liberate women from the kitchen. And with parents in the workforce, the microwave let kids like me fend for themselves after school, falling into a familiar rhythm each day as we shut the door on a bowl of leftovers from the night before and punched in the set of beeps that preceded the whirr of the machine. But it also helped to create a distance between us and what we eat — glutinous masses of food under frosty film that we puncture tiny holes into with our forks before tossing them onto a revolving glass tray and hoping for the best.

Like throwing out the DVD player you haven't used in years, saying goodbye to my microwave was a surprisingly easy adjustment. I really didn't need it. It's not that much more difficult to heat things up on the stove or under a broiler than it was to pop it in the microwave and then have to negotiate the uneven, unpredictable temperatures afterward. And it's now been years since I've bitten into something to have it sear into my skin while simultaneously finding that it's frozen on the inside.

And I've learned a few tricks along the way, like to pour water into a hot pan and cover it for just a few minutes to steam my meal while it sears underneath, reheating it from all sides. I've learned to reheat on the stove in an oven-safe pan, in case I want to finish it off under the broiler — that way, it's like it's not even leftovers, but a fresh course. I purchased an electric kettle that heats water just as quickly as the microwave, and at some point I realized that even if something from the grocery only has microwave instructions on it, that doesn't mean it can't be cooked in an oven — you usually just have to visit the product website for the oven directions.

And I continue to learn. This week I realized that the glass IKEA containers that I use to store leftovers are oven safe and that I have been needlessly dirtying pans for years. The next time I need to stock up on storage containers, I'll know what to look for.

I was never particularly thoughtful about my food when I had a microwave, taking for granted that most of the meals I picked up in the grocery had the promise of a pretty photo and an ingredient list too long to be reasonably made from scratch. But as I became a better home chef — motivated by a desire to understand what I was eating, as well as how satisfied I actually was by each meal — it became second nature to reheat each meal just as I'd originally cooked it. Each serving as good as, or better than, the first.

What if I'd filled my freezer with frozen prepared meals, waiting to burn my tongue and leave me dissatisfied day after day spent alone in my home? Cooking has been both a way to pass hours and hours in quarantine, as well as a way to have some control over my own healthy choices, even as the year has shown us that our own health is not always under our own control.

As I've spent the year observing stay-at-home orders and subject almost totally to my own cooking, and my own cooking alone, I'm thankful that I weaned myself off the microwave when I did and made an effort to learn how to cook exactly the food I wanted and needed.

How would my body feel now, eight months in, if I'd never learned to roast a vegetable every once in a while, or to puree it into a lovely sauce? Even Thanksgiving leftovers offer a more appealing promise than years prior — stuffing reheated and toasted just a little bit in the oven, instead of a lump of mush the day after — for me and my roommate as we give thanks quietly together in our shared bubble.