"We will exterminate you": Proud Boys and Trump diehards confront counter-protesters in Raleigh

A band of COVID deniers, neo-Confederates and pro-Trump diehards protested on Saturday 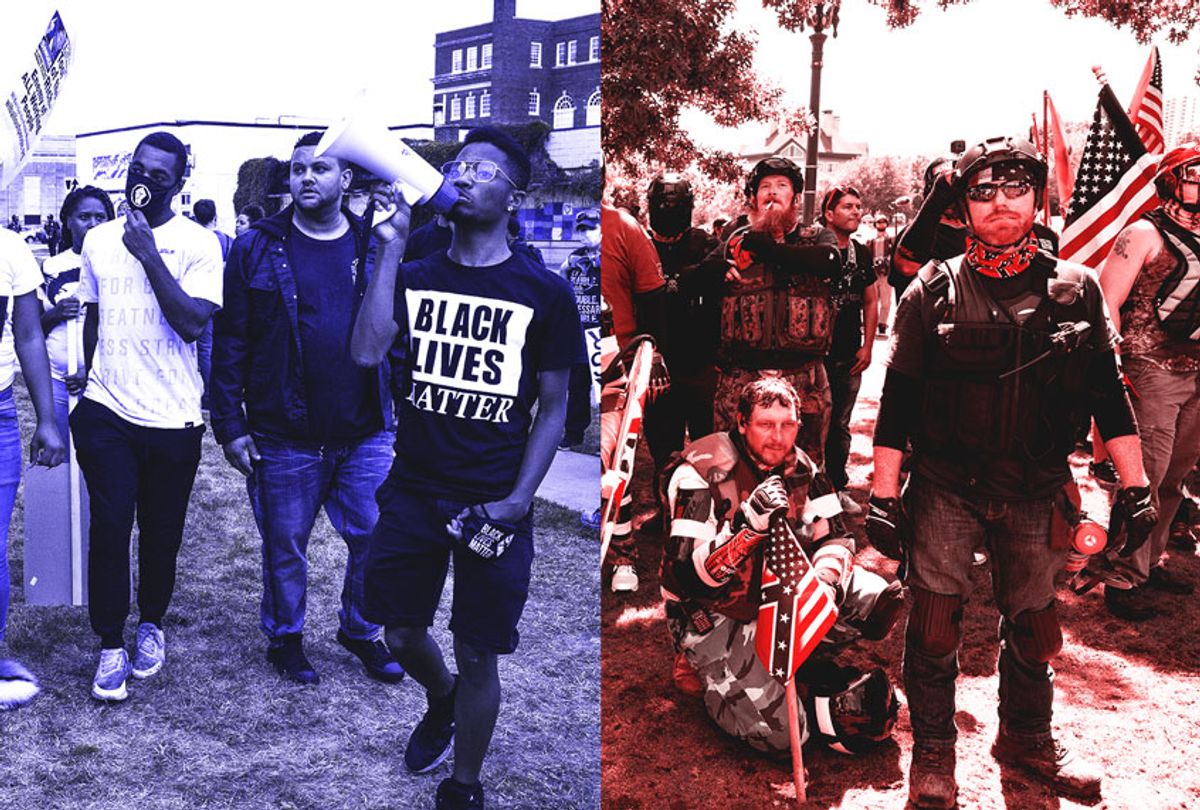 A band of COVID deniers, neo-Confederates and pro-Trump diehards, augmented by a 50-strong Proud Boy security detail, marched around the Governor's Mansion in downtown Raleigh on Saturday, firing up a far-right coalition to carry on the fight as their president faces the reality of leaving office.

The post-Thanksgiving rally was co-organized by Joshua Flores of Stop the Steal NC and Latinos for Freedom, who brought in Reopen NC to help him promote it on Facebook. But the Proud Boys — referenced by Flores as his "private security" in a Facebook Live video two days prior to the event — took the most prominent position in the rally as they spread out along a block of East Jones Street and taunted antifascist counter-protesters.

Flores had promoted the Thanksgiving potluck as a family-friendly event, and urged attendees to not engage with counter-protesters, warning that they would be asked to leave if they failed to honor the request, and adding that "the Proud Boys" would also "have the authority to kick you out." He also suggested, "Try not to use major cuss words, if you don't mind."

The request was almost farcical considering the Proud Boys' history of inciting conflict through profanity-laced taunts that are often barbed with misogyny and homophobia.
True to form, a Proud Boy named Jeremy Bertino picked up a bullhorn a couple minutes after the official 11:30 a.m. start time and addressed the counter-protesters across the street.

"America will never be a communist nation — never!" Bertino said as fellow Proud Boys lined the sidewalk wearing tactical vests and trademark yellow and black gear. "Your side will lose. We will exterminate you like the rats you are…. Exterminate you!"

Bertino kicked off a chant of, "Fuck antifa."

Another Proud Boy wore a patch with the letters "S-B-S-B," a reference to Trump's infamous election-debate directive: "Proud Boys — stand back and stand by."

Bertino wore a patch with the letters "R-W-D-S" — short for "right-wing death squads." Mass killing of political opponents is a theme widely promoted by Proud Boys and other far-right extremists who celebrate Chilean dictator Augosto Pinochet's grisly practice during the 1970s of disappearing opposition activists by dropping them out of helicopters.

Previewing the in-real-life showdown on Saturday, Bertino posted a photo of North Carolina antifascist Lindsay Ayling on the Parler social media platform, encouraging followers to make a contest out of Photoshopping her image, while making a violent and misogynistic claim that "she has an affinity for alpha males and helicopters" and hash-tagging the post #antifawhore.

Bertino told Raw Story he was merely "trolling" Ayling, but the Proud Boys' goofball presentation — naming cereals during their initation rite, for example — conveniently provides plausible deniability for any expressed fantasies of violence.

Bertino also denied that his "extermination" remarks were personally directed at the counter-protesters, although his own words say otherwise.

Throughout the four-hour event, unidentified men with bullhorns stood behind the Proud Boys and excoriated the counter-protesters.

"You guys are making lists," one of the men said. "We're making lists, too." He added a reference to "9mm" ammunition that was otherwise inaudible. Another time, the man addressed the counter-protesters, saying, "You are in a very dangerous position. You are in the vast minority." Bertino told Raw Story he did not hear the comment and could not identify the speaker.

The right-wing group, which broadly expressed defiance of COVID restrictions and loyalty to Donald Trump, out-numbered counter-protesters almost two to one.
Drawn from Raleigh activists who have been protesting against police brutality since late May, along with antiracists and antifascists who are veterans of efforts to remove Confederate monuments, the counter-protesters responded in kind with taunts toward the Proud Boys. One sign held by a counter-protester read, "Proud Boy Thugs: 21st Century Nazi Brown Shirts." Another showed a depiction of a Confederate flag, a swastika and the name "Trump," concluding, "3 generations of losers."

"For individuals to still be conducting 'Stop the Steal' protest/rallies essentially 25 days after Election Day even after Gov. [Roy] Cooper has been declared the winner is in the same vein as the Confederate supporters still showing up places waving Confederate flags," Kerwin Pittman, a field organizer with Emancipate NC, told Raw Story. "They just can't accept the fact they lost. They must be called out on their denial and confronted when they attempt to sow seeds of intimidation in any community."

Pittman was appointed by Cooper, a Democrat, to serve on the North Carolina Task Force for Racial Equity in Criminal Justice. Pittman served time in prison on conspiracy to commit murder, and he has been open about his past. All the same, North Carolina neo-Confederates never miss an opportunity to loudly confront him about his record, and on Saturday a detractor from Alamance County jeered Pittman, daring him to say the name of the man murdered in the case.

Around 1 p.m., Tara LaRosa, an MMA fighter, led an advance team of Proud Boys into the street, with Bertino and others acting as marshals as the larger group of right-wing activists marched around the governor's residence. It's unclear whether they had a permit for the march.

The marchers chanted "Reopen NC," "No more masks," "We are the republic," and "Silent no more."

Reopen NC leader Ashley Smith and her husband, Adam Smith, addressed the crowd with a bullhorn at the entrance of the Governor's Mansion as the right-wing activists held the street, with tight security from the Proud Boys. At the direction of one of the co-organizers, the Proud Boys ejected two reporters, from Raw Story and INDY Week.

The right-wing activists staked out an alternate reality, with one woman insisting to reporters: "Donald Trump won the election."

Jay Thaxton, a North Carolina Proud Boy, blocked a reporter's camera. He said, "When you guys start writing real news, we won't have a problem with you."

A couple wearing shirts promoting QAnon — a conspiracy theory that posits Trump as a hero working beyond the scenes to vanquish an elite global cabal of pedophiles — strolled through the cordon of Proud Boys to join the rally. The man, who declined to give his name, told a reporter: "I pray that God would help you see both sides of the issue, not being right or left. We have a Bill of Rights."

Earlier in the rally, before the right-wing activists broke out covered dishes for their defiant potluck, Reopen NC leader Ashley Smith addressed them.

"I'm just so thankful to see so many patriots and people who love freedom and love America," she said. "Yes, we are here once again to stand in the face of tyranny and all that would destroy everything that we hold dear and love. And I'm here again to say, 'No, you cannot have my America. You cannot have my North Carolina.'

"Right now, we're going to have some food," Smith continued. "We're gonna hug our neighbors and say the Pledge [of Allegiance]."

In anticipation of Thanksgiving, on Nov. 10, Gov. Cooper issued an executive order limiting the number of people at indoor gatherings to no more than 10. On Nov. 23, he followed up with another executive order requiring masks in all public indoor settings.

As justification for the restrictions, the most recent executive order cited record high COVID-19 daily case counts and hospitalizations in North Carolina.

"We are at a critical point, and I am writing to update you on the worsening surge of COVID cases in our community and health system, and to share the actions we are taking," wrote Cone Health Chief Operating Officer Mary Jo Cagle in a memo to staff on Nov. 20.

Cone Health serves Greensboro, North Carolina's third largest city. Cagle said that during the previous week, the number of COVID patients in the hospital system leapt by almost 50 percent, from 95 to 142. She warned that the Green Valley facility, Cone's special COVID hospital, was nearing capacity.

Like the Proud Boys, Adam Smith, the husband of the Reopen leader, has expressed a willingness to resort to violence to uphold his belief system.

In May, he carried a rifle through downtown Raleigh while marching alongside a boogaloo-inspired group that flouted North Carolina's law against carrying dangerous weapons during a demonstration. The politically varied group included an array of Second Amendment hardliners, including a neo-Nazi, an avowed anarchist and self-described constitutionalists. One of the armed men who participated in the walks, Benjamin Ryan Teeter, is now facing federal charges of attempting to provide material support to Hamas.

In May, Adam Smith posted a Facebook Live video saying that people must be willing to kill, if necessary, to resist emergency orders — or what he described as "tyranny."

"But are we willing to kill people? Are we willing to lay down our lives?" he asked. "We have to say, 'Yes.' We have to say, 'Yes.' Is that violence. Is that terrorism? I'm not trying to strike fear in people by saying, 'I'm going to kill you.' I'm gonna say, 'If you bring guns, I'm gonna bring guns. If you're armed with this, we're going to be armed with this.'"

On Saturday, Lindsay Ayling, the antifascist activist, said she observed a Proud Boy point her out to Smith. Then, she said, Smith said, "Lindsay, I'm going to kill you."

Smith responded by text to Raw Story: "Of course I didn't say that!… That's ridiculous."

Ayling insisted that she heard the statement clearly and confirmed with another person that they heard it, too. She posted a video on Twitter showing Smith pointing in her direction and then wiggling his fingers in a motion that suggests pulling a trigger. Smith was standing next to Bertino at the time, and just before making the gesture, Smith yelled, "We are the people. We are the power."

As Trump's political and legal options for hanging onto the presidency evaporate, the Raleigh event and other rallies at state capitols are helping to maintain the tenuous alliance of violent nationalists, Christian-right extremists and conspiracy-mongers that are intent on preventing a left turn as Biden takes office. At the moment, much of that energy is focused on a planned pro-Trump rally on Dec. 12, two days before Biden's election is made official as states cast their electoral votes. The Proud Boys have promoted the event through their Telegram account, and the gathering is expected to be a reprise of the chaotic Millions for MAGA march on Nov. 14, which Proud Boys and other far-right groups treated as a moment of triumph.

Bertino stood at the side of Proud Boys Chairman Enrique Tarrio at the Washington Monument that night as Tarrio exulted after a clash with left-wing opponents.

"I mean, we practically cleaned the streets right there where they're sitting at BLM Plaza," Tarrio said. "They're corralled in, and there's like a hundred of 'em, when usually there's thousands of 'em. And you know who we have to thank for that?

"All of us," he continued. "And this right here shows you the power when we the right-wing unite, and we get together. And we don't bicker about stupid shit."