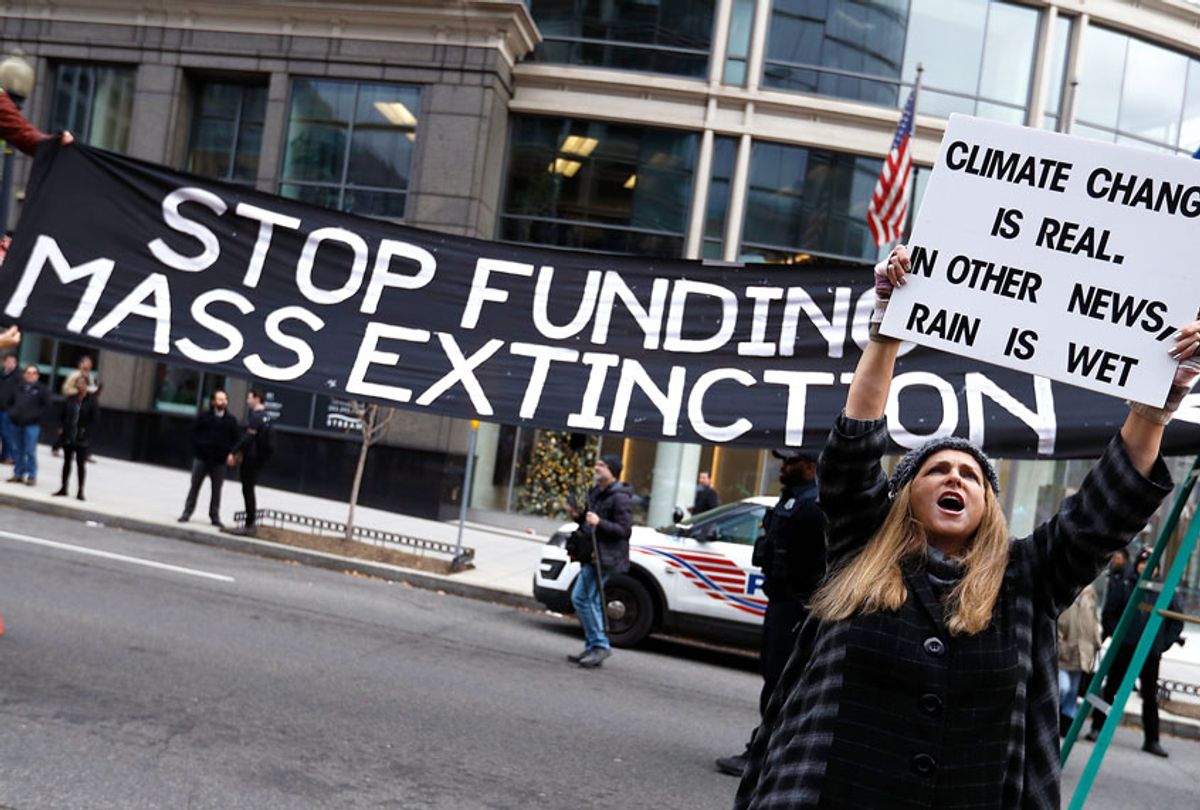 Demonstrates protest during "Fire Drill Friday" climate change protest on December 6, 2019 in Washington, DC. Speakers address the ways in which climate change affects migration and human rights. The movement demands fast action for a "Green New Deal," including renewable energy by 2030, and no new exploration or drilling for fossil fuels, including the end to taxpayer subsidies to oil companies. (John Lamparski/Getty Images)
--

In the past few years, the fossil fuel industry has been targeted by a wave of climate-related lawsuits: cities seeking compensation for damages from climate change, states alleging fraud, fisherfolk suing over declining harvests. Many activists believe that some of the most important climate battles of the century may be won in the courtroom.

But America's elite law firms are mostly on the wrong side of those battles. According to a new report from the advocacy group Law Students for Climate Accountability (LSCA), most of the nation's top 100 law firms provide far more support to clients exacerbating the climate crisis than to clients addressing it.

LSCA's report, released on Thursday, looked at tens of thousands of instances of litigation, transactions, and lobbying from the Vault Law 100 list of the most prestigious U.S. law firms. It found that between 2015 and 2019, top law firms worked on 10 times as many cases exacerbating climate change — e.g., defending a fossil fuel company — as combating it. They also lobbied five times more often for fossil fuel companies than for renewable energy companies, earning $36.5 million in compensation from the oil and gas industry compared to $6.8 million from renewable energy clients.

"These elite law firms are overwhelmingly working on the side of fossil fuel companies," said Tim Hirschel-Burns, another student at Yale Law School and the other lead author of the report. "They are choosing to make a quick buck at the expense of our generation's future."

The report includes a "climate scorecard" that grades each law firm on its climate-related litigation, transactions, and lobbying activities. Overall, two-thirds of the firms received a D or an F grade, and only four got an A. Not all Fs were equal, though — some of the firms performed far worse than the average. Paul, Weiss, for example, in the period from 2015 to 2019, litigated 21 cases exacerbating climate change, seven times the Vault 100 average. And the law firm Hogan Lovells earned 24 times the average for its lobbying work for the fossil fuel industry, netting more than $7 million. (Paul, Weiss didn't respond to Grist's request for comment on the report, and Hogan Lovells declined to comment.)

LSCA's report builds off of a movement that began in January, when law students from Harvard, Yale, NYU, and the University of Michigan protested recruitment events for the law firm Paul, Weiss. "#DropExxon," their banners read, a demand that the firm stop representing the oil and gas giant. In December, Paul, Weiss had successfully defended ExxonMobil in a $1.6 billion trial over the company's alleged failure to inform investors of the risks of climate change to its business.

Leaders from LCSA said the activism was a reminder of the values that brought them to law school, and it helped inspire the idea for the scorecard. "Most of us came to law school to try to make a positive impact," said Hirschel-Burns. He said that the report could be a tool for like-minded students who are choosing which law firms to apply to post-graduation.

Harold Koh, former dean of Yale Law School and legal advisor to the Department of State, suggested in a statement that aspiring and current lawyers should use the climate report card to "search their souls," asking themselves whether they are "truly devoting their life's energies toward a more livable future, or toward an increasingly uninhabitable planet."

Law students can choose to boycott some of the worst firms, Hirschel-Burns said, but that is not always possible given students' varying financial situations. Ultimately, the LSCA's message is directed at law firms. "We want them to see the error of their ways," he said. "If not, we want them to be held accountable."

The report concludes by asking firms to sign the Law Firm Climate Responsibility Pledge, a promise to stop taking on new work for the fossil fuel industry and phasing out existing work by 2025 at the latest. The pledge also commits signatories to taking on more renewable energy clients and pursuing litigation that fights climate change.

"This report should serve as a wake-up call for law firms to stop lending their services to the fossil fuel industry — and instead use their skills and power to fight climate change," the LSCA writes.