Rudy Giuliani, who has not been charged with a crime, discussed preemptive pardon with Trump: report

While Giuliani's specific legal exposure is unknown, he is a subject in at least two recent federal investigations 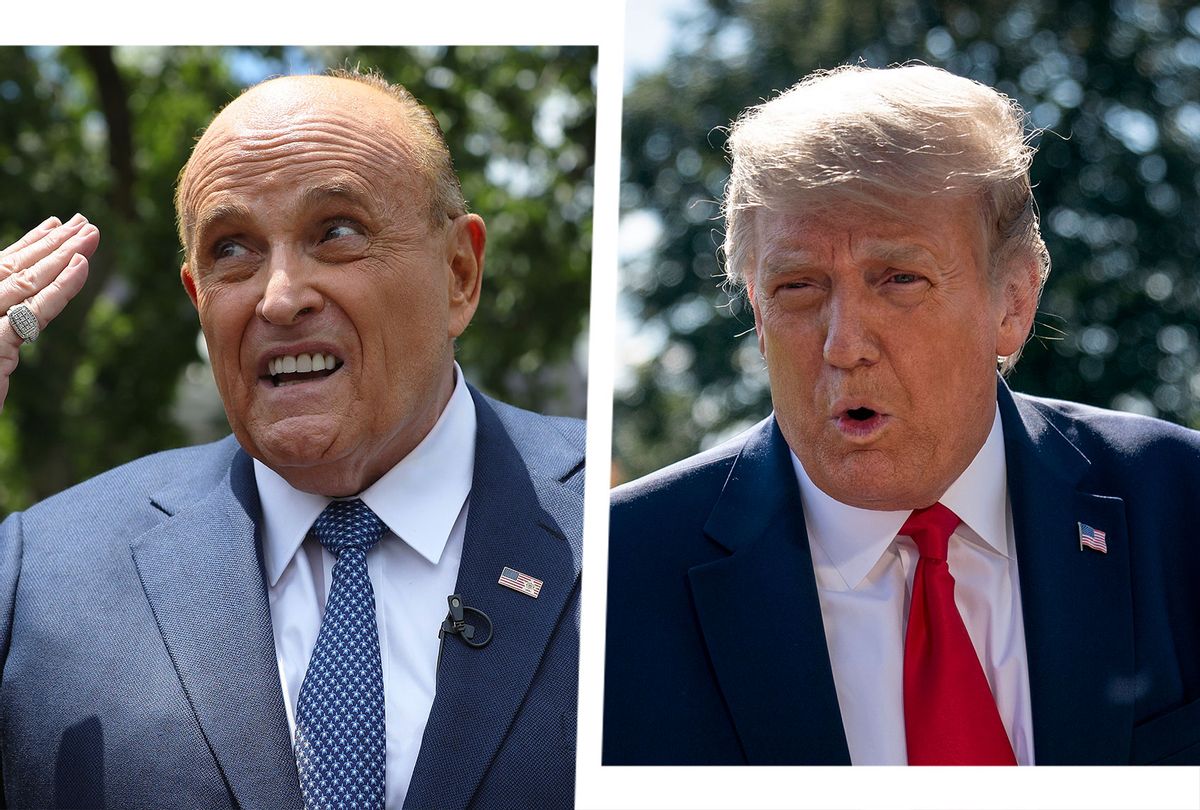 Two individuals told The New York Times that the pair of longtime friends had discussed the possibility as recently as last week, though it was unclear who first raised the topic.

While Giuliani has not been charged with a crime, federal investigators have probed his business dealings abroad, including in connection with his failed attempts in Ukraine last year to smear then-candidate Joe Biden with allegations of corruption. Giuliani's efforts led directly to the impeachment of his client, Trump — a process the former U.S. attorney has vigorously defended in numerous TV appearances.

"#FakeNews NYT lies again. Never had the discussion they falsely attribute to an anonymous source," he posted on Tuesday. "Hard to keep up with all their lies."

Though an unlimited pardon, which implies admission of a crime, would offer Giuliani blanket immunity, it would also prevent him from pleading the Fifth if he were called to testify in any future court proceedings.

Trump last week issued a sweeping pardon to Michael Flynn, his former national security adviser who had sought to overturn a 2017 guilty plea for lying to the FBI about backchannel contacts with the Russian government ahead of the president's inauguration.

The formal language of that pardon first appeared in a Department of Justice court filing on Monday, once again asking U.S. District Judge Emmett Sullivan to dismiss the government's case against Flynn.

The filing described a "full and unconditional pardon" which extended beyond Flynn's plea to "any and all possible offenses" that might arise in connection to the case, as well as "any and all" possible future offenses related to the Mueller investigation "in any manner" — including grand jury proceedings.

In addition to the Russia-related charges, Flynn faced possible criminal liability for failing to register as a foreign agent for his work on behalf of the Turkish government during the 2016 election, when he was the Trump campaign's top national security adviser.

Nixon, however, faced clear legal jeopardy for obstruction of the Watergate investigation. Any criminal liability for Giuliani is at this point speculative, as far as public reporting goes.

According to interviews conducted by Salon with individuals familiar with the case and multiple news reports, Giuliani's business dealings have been subject of subpoenas from the Southern District of New York — the very office he once led.

That probe grew out of the arrest of former Giuliani associates Lev Parnas and Igor Fruman, who were booked one year ago on unrelated campaign finance charges at a Washington-area airport as they waited to board a flight to Vienna. Their arrests came as impeachment hearings heated up in Congress — and one day after they met Giuliani for drinks at Trump's Washington hotel.

"He's not concerned about this investigation, because he didn't do anything wrong and that's been our position from Day 1," Robert Costello, Giuliani's personal attorney, told The Times on Tuesday.

Additionally, CNN reported last month that FBI agents in New York revisited witnesses with new questions about Giuliani's efforts in Ukraine and possible links to Russian intelligence. The agents reportedly inquired about the source of communications and images which Giuliani pulled from what he said was Hunter Biden's hard drive.

Salon reported in October that Giuliani had declined similar material in May 2019, citing concerns about reliability, as well as connections to Russian intelligence. Politico later matched that report.

Giuliani's communications director did not reply to Salon's request for comment for this article.