What would a "successful" Trump presidency have looked like? An alternate universe

Trump believed his base wouldn't let him be a normal president. That's not true: The failure was his alone 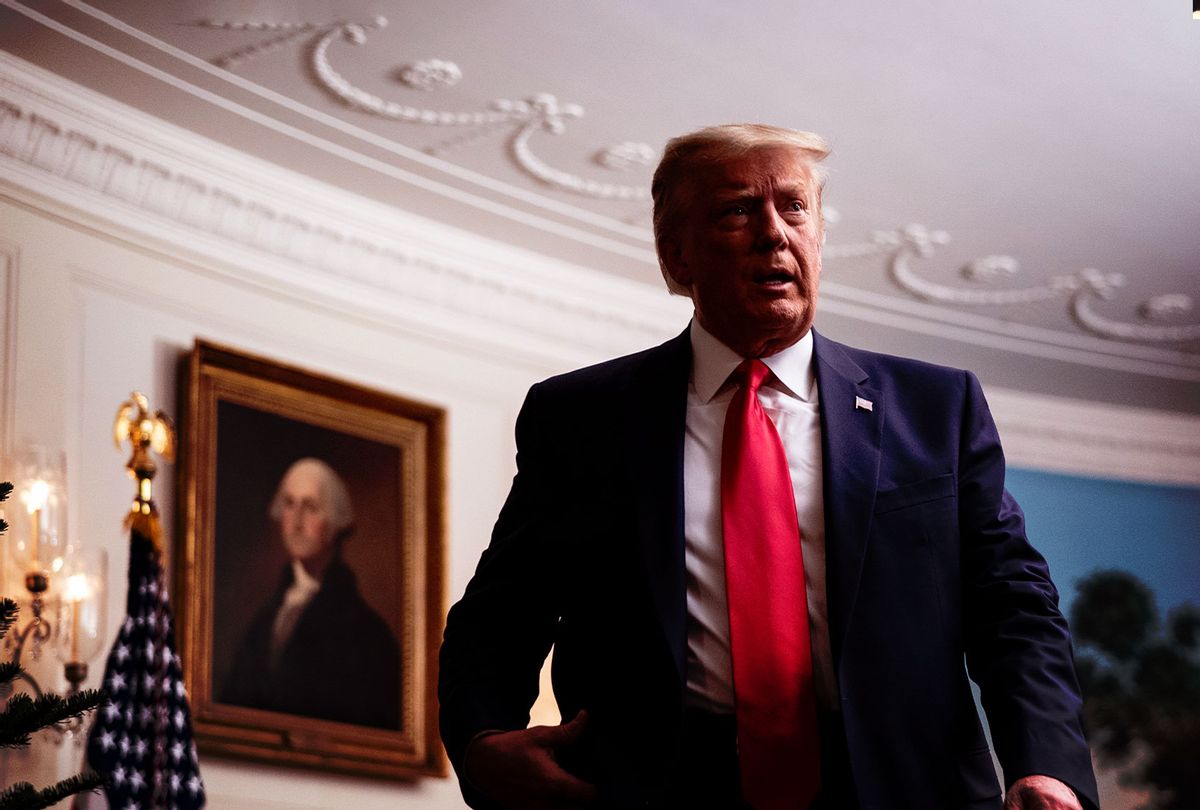 President Donald Trump leaves after speaking in the Diplomatic Room of the White House on Thanksgiving on November 26, 2020 in Washington, DC. (Erin Schaff - Pool/Getty Images)
--

Donald Trump could easily have won re-election while riding an approval rating in the mid-50s. I'll tell you how in just a second. But if you were to ask him, Trump would tell you all about how the "fake news", the "China virus" and the "corrupt" Biden campaign stopped him from achieving a successful presidency.

He'd be lying, of course. The only thing that stopped Trump from reaching a second term was Trump himself.

During his remarks at this year's Democratic National Convention, Barack Obama nailed the central crisis plaguing Trump's presidency, and it began long before the White House was on Trump's radar.

Obama explained, "Donald Trump hasn't grown into the job because he can't." The former president added, "He's shown no interest in putting in the work; no interest in finding common ground; no interest in using the awesome power of his office to help anyone but himself and his friends; no interest in treating the presidency as anything but one more reality show that he can use to get the attention he craves."

Due to a laundry list of character flaws, mental illnesses and the blindingly obvious trappings of his "brand," Trump was only ever going to be a failed poseur president at best, beloved by no one but similarly damaged, similarly uneducated, similarly aggrieved, similarly pitiable Americans. His myriad personal glitches have been collectively amplified by his fanboys and therefore worsened through their misguided and unsubstantiated adulation — positive reinforcement for his worst traits — rendering him completely trapped by his own reputation, blinded to what was a relatively easy path to success and a second term.

For years, certain members of the cable news media eagerly anticipated a Trump pivot to being more "presidential." Talkers like Van Jones seemed desperately spring-loaded to crown Trump as finally having grown into the gig, but had they actually paid attention to who Trump was and is, they never would have assumed he was capable of such a transition.

Trump was always too possessed by the janky ideological-slash-conspiratorial roadmap provided by Fox News, talk radio and the perpetual online freak show to be capable of redirecting toward a more traditional agenda. Not only is he psychologically incapable of it, I'm sure he believed his disciples would never let him do it. He was wrong. The best way to have "owned the libs" would've been for Trump to attain actual popularity beyond his base. His hothead supporters would've gone along with whatever it took to get there.

How could Trump have made it to a second term?

The plan would've involved three things: 1) Keeping his big mouth shut, 2) Launching a first-term agenda exclusively about building things, and 3) Following a paint-by-numbers plan to control the spread of the pandemic while mitigating the economic fallout.

The first thing on the list — exercising some self-control — would have been the most challenging, while also the most rewarding for Republicans, had he been capable of managing it. Trump always makes things worse for Trump, and his total lack of restraint is the primary way he sabotages himself. But imagine a Trump presidency, if you can, without the tweets or the rallies or the egregious lying.

Of course Trump is known for his constant screeching, but I believe the supporters of Screechy Candidate Trump would've been fine with Less Screechy President Trump. To get there, he might have been convinced to put on a show for the public — as a semi-traditional president. A performance. His pal from "The Apprentice", Mark Burnett, could have helped here. Meanwhile, Trump could have engaged in his usual hissy fits via surrogates, while keeping his (painted) nose clean. His aides could have told him the truth: His personal cellphone was a security risk — so hand it over.

But, once again, he couldn't do it. He's practically addicted to his image as a raging id — a whiny, fragile, small man, awkwardly framed as an alpha dog. He would probably have resigned before relinquishing his misguided and never-quite-satisfied craving to verbally sucker-punch his enemies.

Beyond his weirdly garish Dick-Tracy-villain appearance, Trump's always been known as a builder. Those of us familiar with his track record understand the reality behind this claim. He has seldom built anything, but instead brands existing structures that someone else built. Nevertheless, the conventional wisdom, accurate or not, includes the perception that he builds things. Fine.

So right from the start, perhaps even during the transition, Trump could have branded himself as the infrastructure president, outlining an entire agenda of stuff he intended to build: railroads, highways, bridges, public buildings, museums, monuments, utility grids and so on. He could have spent his presidency attending groundbreakings and ribbon-cuttings, just as he did before he was president. Rather than pursuing the anti-Trump villain of the week, rather than wasting political capital cultivating his image as the world's most infamous a-hole, he could've spent his early presidency launching a four-year construction agenda, working with congressional Republicans from key states to pass financing for such a massive undertaking. Trump's loyal fans would have kept any stray "fiscally responsible" Republicans from balking at the cost.

Instead, "infrastructure week" became a Trump era punchline. Every time a plan was about to be rolled out, Trump would hobble the effort by launching another shovel-fight or relentlessly whining about how unfair the world is to him. Again, Trump always makes things worse for Trump.

So rather than breaking ground as the Construction President on a series of herculean infrastructure projects, Trump built exactly one thing: 15 miles of rickety new fencing at the southern border — fencing that no one cares about except racists and the Minute Men.

Despite all that, you'd at least think that one of the world's best-known germophobes would have done whatever was necessary to stop a plague from infecting tens of millions of Americans, including himself. Sadly, most Americans, with our notoriously short attention spans don't remember much that happened prior to March, when COVID first gripped the nation. Due to our selective amnesia, Trump had the opportunity to nail the response to the pandemic and save his presidency, but inexplicably refused.

The solution was simple enough: Pay people to stay home.

If there's one thing the past 40 years have taught us about fiscal policy, it's that Republicans don't care about federal spending as much as they say they do. Otherwise the last several Republican presidents wouldn't have left office with higher budget deficits than when they started. It would have cost an unprecedented fortune to do this, but the crisis itself was equally unprecedented.

Faced with a false choice between stopping the spread and keeping the economy afloat, Trump went with the latter rather than proposing to do both. By paying people to stay home, and by paying non-essential small businesses to remain closed, the needle could have been threaded.

But of course, Trump was far too motivated by the fate of his personal finances and his counterfactual brags about "the greatest economy ever." So he chose instead to stand down at the initial height of the infection curve, allowing an uncontrolled pandemic to kill more than a quarter-million Americans and counting, while infecting millions more with pre-existing conditions.

Although the stock market rebounded, the broader economy continues to hover in a recession on par with 2008, and the next wave is about to begin. In other words, by ignoring the pandemic and favoring the Dow, Trump managed to fail at both flattening the curve and at keeping the economy in the black.

In his final year, Trump faced his "Cuban Missile Crisis test" and failed it catastrophically, infecting himself in the process. Again, he could have succeeded if he were capable of adjusting to reality, but he's not.

Trump, along with everyone who enabled his worst instincts, is why he'll be a private citizen again in 49 days. Full stop. Trump is why Trump will be remembered by history as apocalyptically bad at his job, sparking myriad long-term fiascos that we're only beginning to understand. It didn't have to be this way. Americans typically want their presidents to succeed, and history shows we have a penchant for two-termers. But it's far too late for Trump, who made it impossible for Americans even to tolerate him, much less like him. Now history will have its way with him — and his legacy won't look anything like he wants it to look.