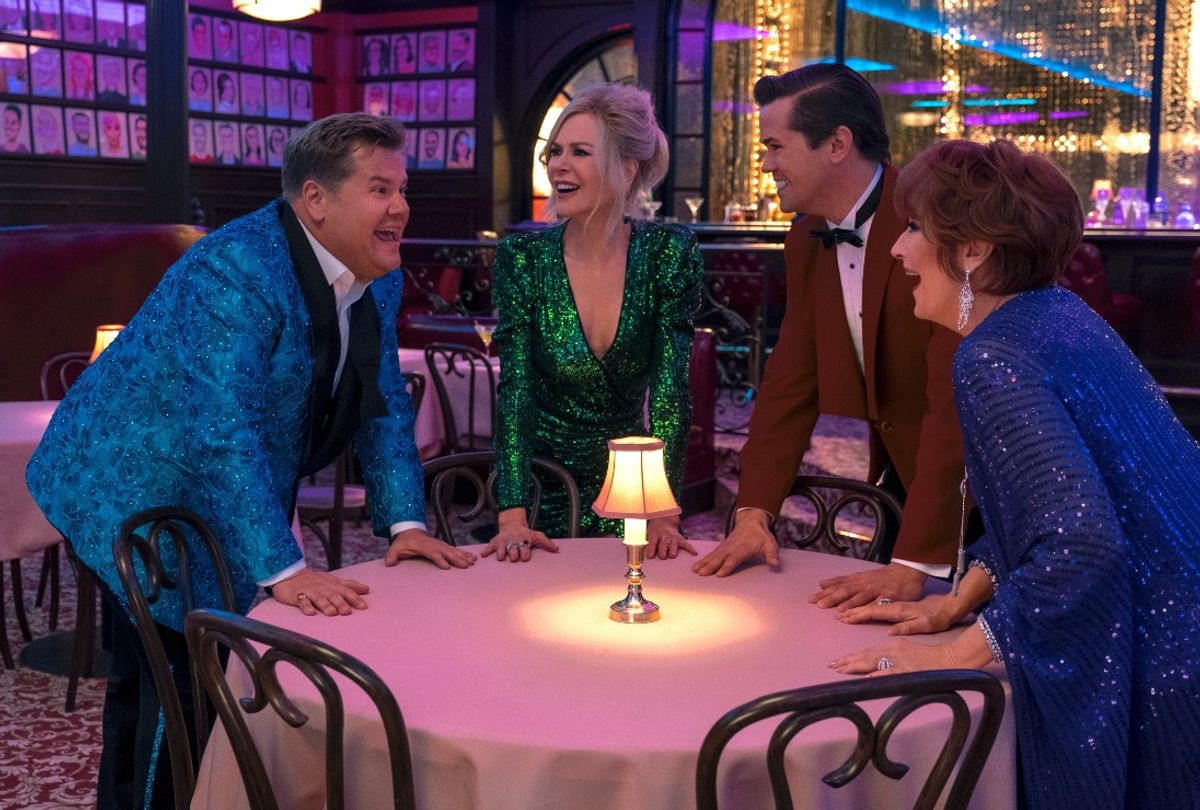 James Corden's casting in "The Prom" has come under fire by several film critics and entertainment journalists now that Netflix has screened the star-studded musical for press. Corden stars in the film as Broadway actor Barry Glickman, played on stage by Brooks Ashmanskas in a Tony-nominated performance. Barry is a flamboyant and openly gay Broadway diva, which has led some press to question why Corden was cast in the role.

"Opinions differ on how acceptable it is for straight actors to play gay roles, but few straight actors could get away with a gay character like this, a role that would feel stereotypical in an '80s sitcom and here feels offensive," writes Newsweek critic Samuel Spencer, who notes Corden is "offensively miscast" in the role.

"After all, it is not like we have a shortage of actual gay actors who could give the role more pathos," Spencer adds. "Was Titus Burgess busy? Was Nathan Lane on holiday? Andrew Rannells is even in this movie, so we know he was available, and though he has fun as the out-of-work actor who wants everyone to know he went to Juilliard, this film would have been better had he been given the bigger role."

The Hollywood Reporter critic David Rooney agrees the character of Barry "cries out for Nathan Lane" as opposed to Corden. The critic adds, "Perhaps aware of the potential minefield for a straight actor playing a flaming gay stereotype, Corden channels the mannerisms without the joy. It's a flat performance without much heart."

More damning is a review published in The Telegraph by critic Tim Robey, who writes, "In a cast full of talented queer actors in the younger parts, it's a massive problem to have Corden in gay-face front and center, trying his utmost to own Barry's tragic experience of leaving home as an unloved 16-year-old….When he grabs Emma's hand and whisks her to the mall for a makeover, it's an insult the film doesn't even consider, stereotyping the young lesbian as fashion-clueless and the gay man as a bustling Queer Eye nightmare who made this reviewer embarrassed to be batting for the same team."

Erik Anderson, founder of AwardsWatch, shared similar sentiments on social media, calling Corden's casting "the huge drawback" of the film. Anderson adds, "His performance is gross and offensive, the worst gay-face in a long, long time. It's horrifically bad."

Other social media dissenters include Jesse Hassenger, who has bylines at The AV Club and Polygon. "'The Prom' taught me a real lesson about tolerance," the reviewer writes. "I used to think that it was permissible for a straight actor to play a gay character in some circumstances; now I'm willing to go hard-line against it if it means denying James Corden even one future role."

Digital Spy critic Ian Sandwell claims Murphy "made a major error in the casting of James Corden as the musical's gay male lead character….We're not saying it's a flaw merely to cast Corden in a movie. It's specifically about casting him in this particular role of Barry Glickman, who, in his own words, is as 'gay as a bucket of wigs.' The result sees Corden camp it up to the point of being regressive and offensive, hitting every gay stereotype along the way.

"Corden, as much of an entertainer as he is, is not an actor with the range to make it work," Sandwell continues. "His performance comes across as dated and strikes a sour note in a movie that otherwise has a very welcome and heartwarming message."

Richard Lawson of Vanity Fair called Corden's performance "insulting" and also offered up Nathan Lane as an actor who would've been the right fit for the role. Lawson's review claims Corden "is so bad" in "The Prom" that "no more straight actors [should play] gay men until the sins of 'The Prom' are properly atoned for."

"Corden, flitting and lisping around in the most uninspired of caricatures, misses all potential for nuance, and thus never finds even a hint of truth in the role," Lawson writes. "And this is in a movie that's supposed to be about empowering queer people!"

It isn't all pans for Corden, however. Variety critic Owen Gleiberman could sense the backlash coming and wrote in his review, "Corden may be attacked in some quarters for portraying Barry as a gay stereotype, but like Christopher Guest in 'Waiting for Guffman' he burrows so deeply into the character that he gives him a three-dimensional essence. He's soulfully funny and touching."

Having seen the film, the outrage over Corden's performance has less to do with a straight actor playing gay and more to do with the uncomfortableness of Corden leaning into effeminate gay stereotypes. The plot includes a backstory for Barry that's meant to add depth to the character, but that doesn't prevent the film from becoming cringe-inducing each time Corden plays up the character's sassy, over-the-top flourishes. The outrage here isn't a character issue but a casting one that's specific to Corden.

"The Prom" will be available to stream December 11 on Netflix.