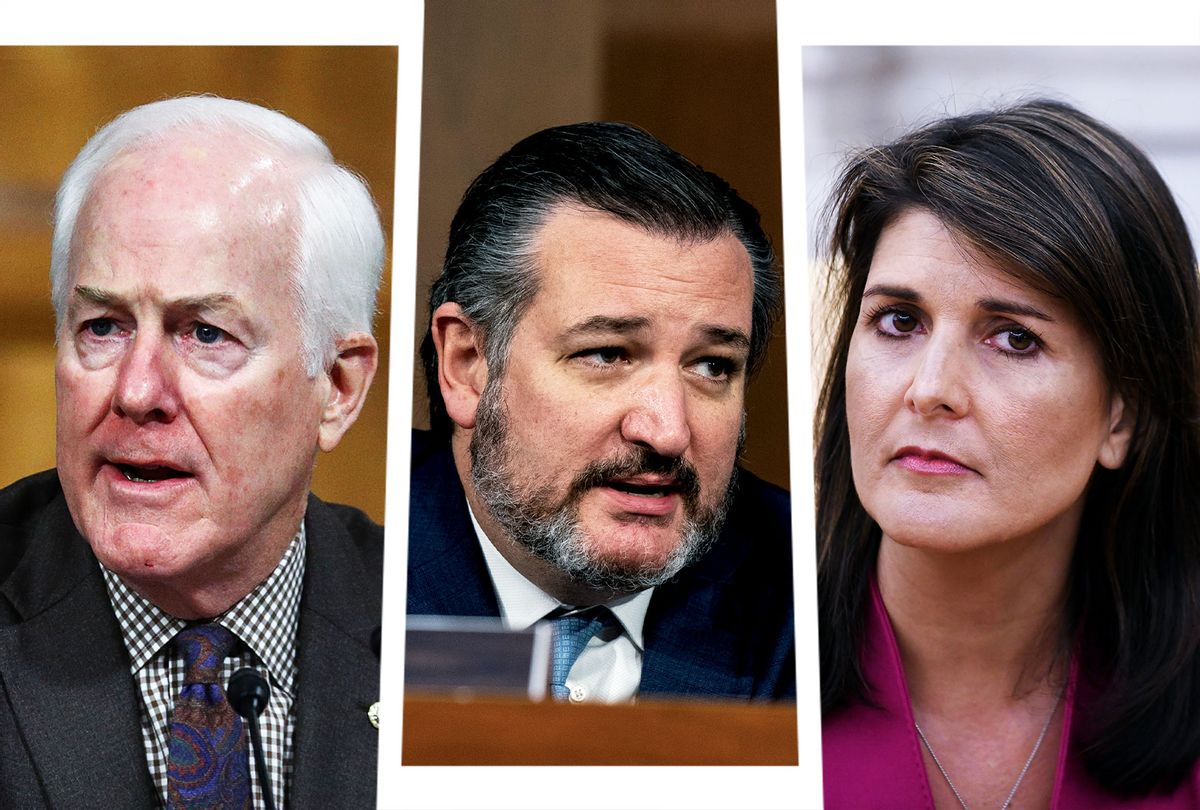 Throughout this post-election period, the reaction from congressional Republicans  has been entirely predictable. Mostly they've remained mum about the demented behavior of their president during the last month as he has continued his precipitous dive into a rabbit hole filled with conspiracy theories so delusional that it calls for medical intervention. A few have stepped up to say publicly that Trump has a "right" to pursue legal remedies in court, while privately assuring reporters that the president just needs to act out a little bit before he finally can emotionally accept what's happened to him.

His stalwart manservant, Sen. Lindsey Graham, R-S.C., initially involved himself in Trump's attempts to strong-arm state officials into throwing out legitimate votes in order to help him win. Sen. Rand Paul, R-Ky., has evidently been poring over some alleged statistical analysis he found on a dodgy website, and has convinced himself there's something hinky about votes that were counted after midnight. And Sen. Ted Cruz, R-Texas, the man Trump once accused of stealing the Iowa caucuses back in 2016, now wants the Supreme Court to take up one of the president's absurd cases.

This isn't the first time a demagogue and conspiracy-monger has captured the Republican Party. CNN's Ron Brownstein has pointed out the unpleasant parallels between the way the GOP establishment kowtowed to Joseph McCarthy during the Red Scare of the '40s and '50s and their servile acquiescence to Trump's malignant narcissism. In fact, this seems to be a permanent strain in American conservatism:

Whatever their private doubts about his claims, [Sen. Robert] Taft and other GOP leaders concluded that McCarthyism was a political winner for the party. ... Gallup polls showed that about three-fifths of Republican voters viewed McCarthy favorably well into early 1954.

In another parallel to Trump, congressional Republicans were deferential not only because they considered McCarthy an ally, but also because they recognized him as a potential threat. The journalist William S. White captured their skittish ambivalence when he wrote, "In McCarthy, embarrassed Republican leaders know they have got hold of a red-hot bazooka, useful in destroying the enemy but also quite likely to blister the hands of the forces that employ it. Their private fear is that a lethal rocket may at any moment blast out through the wrong end of the pipe."

Brownstein notes that this dynamic drove the party further and further into conspiracy theories being disseminated by the progressively unhinged McCarthy. It was years before his reign of terror was ended and one of the few Republicans who stood up against him, Sen. Ralph Flanders of Vermont, told the truth about what had happened: "The responsibility for this thing lies squarely on the heads of the Republicans who have been obsessed with the value of McCarthy to the party. We are reaping what they have sown."

I don't know what it is about the Republican Party that invites this sort of thing but it's disturbing, to say the least, that we have seen it reappear in the 21st century. I have to say that I'm even more disturbed by what we are seeing in the aftermath, which also closely resembles what happened during that dark time. The Republican establishment, which so eagerly enables dangerous demagogues, seems to emerge from these episodes without any sense of responsibility for what they've done, or even any memory of what happened.

Sure, McCarthy was consigned to history's dustbin, remembered as a malevolent drunk who railed against communism and was finally taken down by Joseph Welch, chief counsel for the U.S. Army, who famously demanded, "Have you no sense of decency, sir, at long last?" But there is little mention of the cowardice and opportunism of the Republicans of that time who acted as McCarthy's accomplices. They carried on with their careers as if nothing had happened. (In fact, one of the great Republican red-baiters of the era, Richard Nixon, went on to become president.)

This brings me to today, when I watch with astonishment as Republicans who have actively collaborated with Donald Trump are partying like it's 2009, as if Donald Trump were still hosting "Celebrity Apprentice." Take, for example Sen. John Cornyn of Texas, who had the unmitigated gall to go to the floor of the Senate and say this on Tuesday:

Your jaw has to drop at the utter absurdity of any Republican saying such a thing, particularly one who not only supported Trump with his opaque, byzantine business dealings around the world but voted for every one of Trump's corrupt Cabinet picks, including Commerce Secretary Wilbur Ross, who was just revealed to have remained on the board of a Chinese company up until last year.

Even more outrageous is Cornyn's opposition to Joe Biden's choice to head the Office of Management and Budget, Neera Tanden, supposedly because of her insulting tweets:

Here's another member of the Republican establishment weighing in on that "bad judgment":

Sen. Rob Portman of Ohio is also clutching his pearls over Tanden's "partisanship":

"I think it's very important to have someone who can work with both sides of the aisle," said Portman, who held the budget post under President George W. Bush. "She has a very liberal public record and a very partisan series of comments she's made."

That's right, the people who routinely say they don't read the president's outrageous tweets are now pretending to care about online civility. Moreover, they are complaining about "partisanship" when they all voted to confirm Mick Mulvaney, the onetime Tea Party congressman and founder of the House Freedom Caucus, which was so "partisan" it chased both John Boehner and Paul Ryan out of the speaker's chair and forced regular government shutdowns. (Mulvaney himself told the Washington Post that Tanden has no chance of confirmation.)

We are seeing a return to the smarmy, sanctimonious, "adults in the room" pretense of Republicans who will wring their hands over Democrats' alleged incivility and partisanship — toward Donald Trump, the crudest, most insulting brute in American politics since Joseph McCarthy. Hypocrisy doesn't even come close to describing this. It is shamelessness on a level that is downright psychopathic.

I maintain that one reason the Republicans did as well as they did in down-ballot elections was an ongoing desire on the part of people on all sides of the political spectrum to say, "Oh that's just Donald Trump — he's nuts, but now he's gone." Plenty of people all over the country apparently believed that and split their tickets, voting for Biden for president and Republicans for other offices. If the two Georgia runoffs don't go the Democrats' way, then that party's inability or unwillingness to make clear to voters that the Republican Party was equally responsible for everything Trump did will end up being one of the biggest mistake they've ever made. Republicans are already "pivoting" to being the grownups who need to tame the unruly Democrats, as if none of this ever happened, and the Democrats are already on defense.