America in 2020: Heard the one about the Jewish doctor, the Black nurse and the Nazi patient?

It sounds like the setup for a joke: But America's moral crisis in the last winter of the Trump era isn't funny 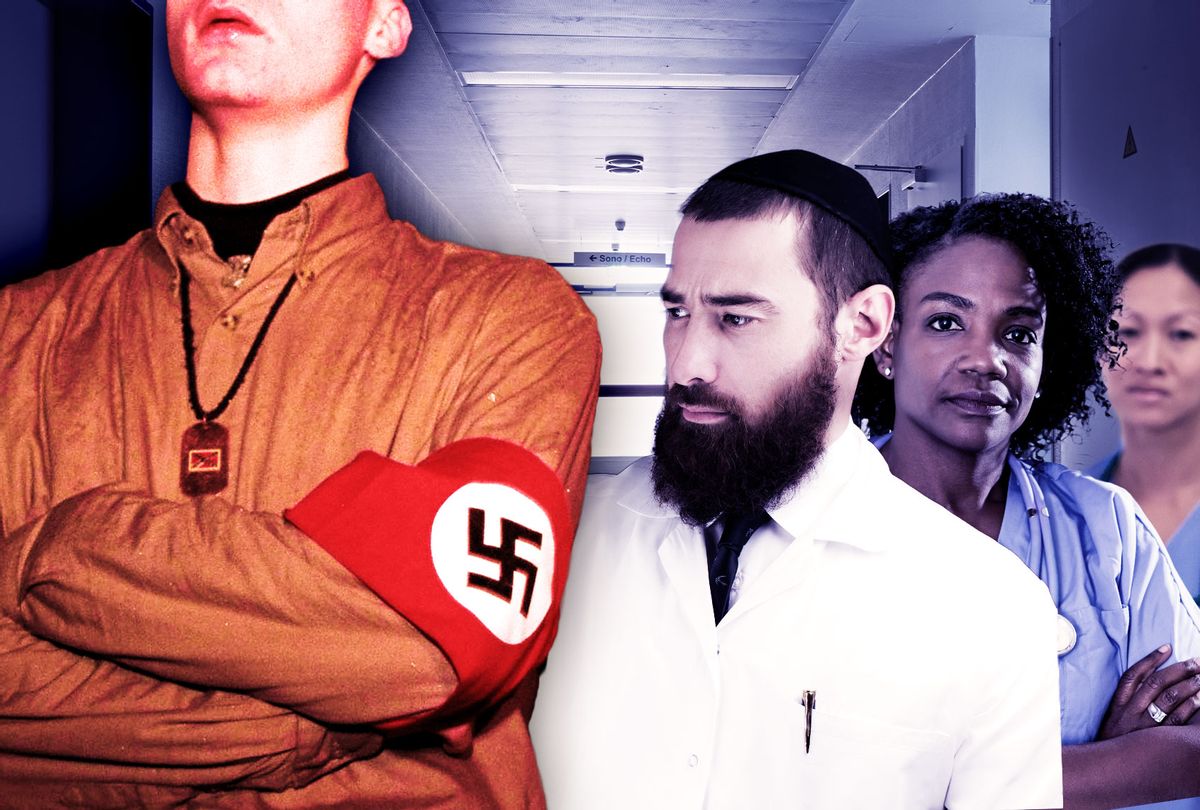 What would you do if a neo-Nazi or an obvious white supremacist emblazoned with emblems of hate came into your emergency room, critically ill with from COVID-19?

He came in by ambulance short of breath. Already on CPAP by EMS. Still, he was clearly working hard to breathe. He looked sick. Uncomfortable. Scared.

As we got him over to the gurney and his shirt off to switch a a hospital gown, we all noticed the number of Nazi tattoos.

He was solidly built. Older. His methamphetamine use over the years had taken its usual toll and his teeth were all but gone.

The swastika stood out boldly on his chest. SS tattoos and other insignia that had previously been covered by his shirt were now obvious to the room.

"Don't let me die, doc." He said breathlessly as the RT switched him over from CPAP by EMS to our mask and machine.

I reassured him that we were all going to work hard to take care of him and keep him alive as best as we could.

All of us being a team that included a Jewish physician, a Black nurse, and an Asian respiratory therapist.

We all saw. The symbols of hate on his body outwardly and proudly announced his views. We all knew what he thought of us. How he valued our lives.

Yet here we were, working seamlessly as a team to make sure we gave him the best chance to survive that we could. All while wearing masks, gowns, face shields, gloves. The moment perfectly captured what we are going though as healthcare workers as this pandemic accelerates.

The plural of anecdotes are not data. But what happened to Dr. Nichols on that day signals to a much bigger story about American society.

Race and class have a disparate impact on health outcomes in America. Social inequality does not take a detour around the country's hospitals, medical clinics and doctor's offices. Rather, it drives straight through them.

In a recent article for Slate, Dr. Uché Blackstock, the founder and CEO of Advancing Health Equity, explains this in detail:

What systemic racism has done is limit the opportunities Black Americans have, to the effect that it's placed us in a situation where we are most vulnerable to this virus. Add onto that the fact that our communities carry the highest burden of chronic disease — which, again, is a result of racism, lack of access to care, lack of quality care, lack of investment in our communities, lack of opportunities for finding healthy food options in our neighborhoods. All of what we're seeing right now just shows how deeply embedded racism is in this country, in every aspect of the lives that we lead.

While Nichols and his team made the noble decision to treat a Nazi, Black and brown doctors frequently encounter both overt racism as well as other forms of racial hostility by patients reluctant to be treated by someone who is not white. Research also shows that (white) doctors are more likely to believe that Black people have a higher tolerance for pain than other groups. As compared to whites, Black patients are not given the proper drugs to manage their pain. Black and brown people have poorer overall health outcomes, even when class and income are taken into account, than white people. Nonwhite people also report receiving a lower quality of medical care than do white people.

Black women are much more likely to experience severe complications as well as die in childbirth or during pregnancy than are white women.

Of particular note: the coronavirus pandemic is not an equal opportunity killer: Black and brown Americans are at least twice as likely to die from the disease, compared to white Americans.

Dr. Nichols and his team felt bound by professional ethics and human decency to treat a Nazi. But their decision was not made in a political vacuum.

Conservatives and other members of the white right celebrate doctors such as Taylor Nichols as "heroes," among the "frontline" and "essential" workers, who are helping to save the United States during a plague made many times worse by Donald Trump's cruelty and ineptitude.

Yet these same disingenuous voices on the right also support a president, a political party and a movement that has become a death cult, and which has directly or indirectly killed hundreds of thousands of people, both through active sabotage and negligence and through a belief in the literal sacrifice of human beings on the altar of "the economy."

What would have I done if put in the same position as Dr. Nichols and his medical team?

I am not a doctor, of course, and not constrained by the Hippocratic oath. I would have asked that man if he still believed in the white supremacist and other hateful values inscribed on to his body. If he said yes, I would have told him, "You should live and die by your principles. I will not violate your principles by helping you." At that point I would have told the man that he should find another doctor or hospital to help him, and walked away to attend to one of the many other patients more deserving of my care.

I am not so naïve as to believe that the healing hands of a Black man can save the heart or mind of a Nazi or other white supremacist. If such things are possible, it is not my responsibility to prove them so.

The coronavirus pandemic and its devastation, destruction and death has been a test of the American people's collective and individual character, beliefs, ethics and morality.

Dr. Nichols is a credit to his profession by living his personal code and values. Like many other people, I try to do the same thing everyday as well.

Ultimately, history and hindsight will decide if the American people, were right or wrong, a success or a failure, in our response to the Age of Trump and his pandemic.

What happened that day in a California emergency room — when a Nazi fighting for life sought help from a Jewish doctor, an Asian respiratory therapist, and a Black nurse — is a moral parable, a microcosm of sorts, for America in the Age of Trump.