"Christmas Ever After": Ali Stroker hopes to give disabled girls a romantic heroine

At long last, a disabled woman is portrayed as a character that is confident, ambitious, and desirable 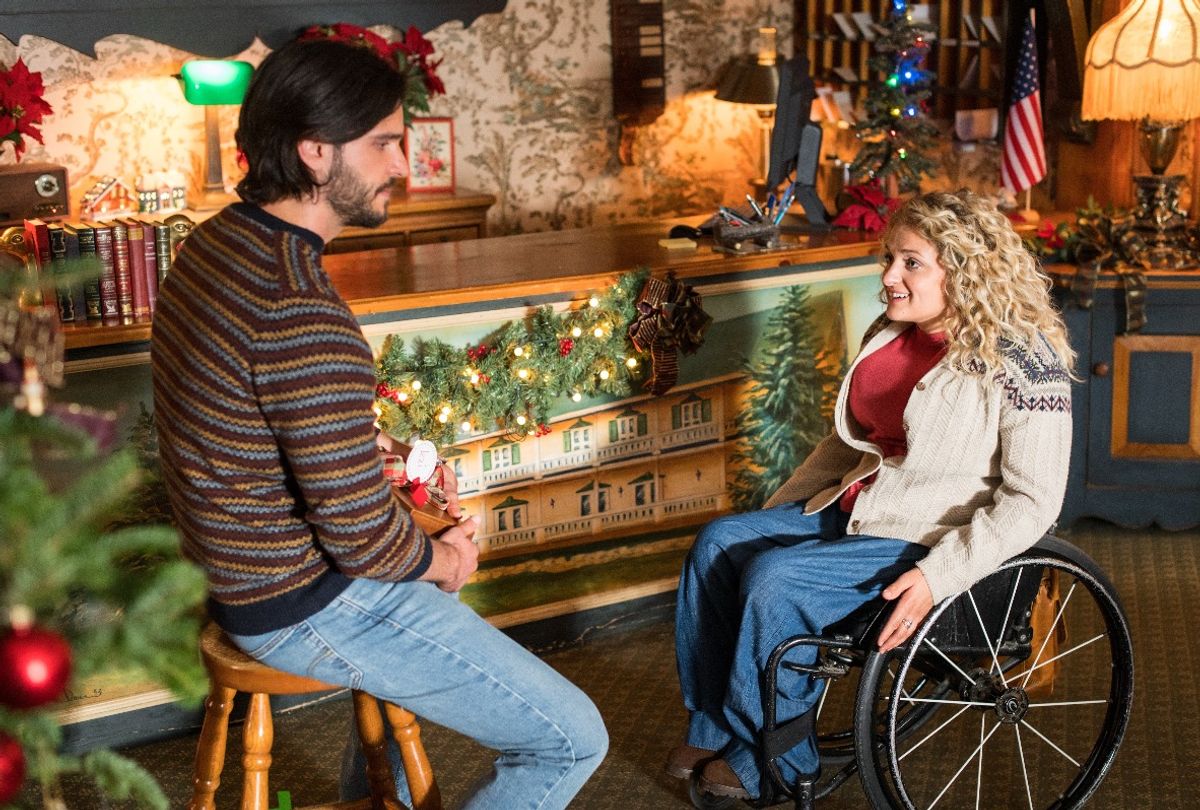 Daniel DiTomasso and Ali Stroker in "Christmas Ever After" (Lifetime)
--

The Lifetime channel gets labeled many things, but revolutionary isn't one of them. And yet, while watching their latest Christmas romance, "Christmas Ever After," I kept using that word. The story is simple: Romance writer Izzi Simmons travels to a small-town family lodge for Christmas where she meets a man who looks just like the fictional figure on her book covers. If you think you know where the story goes you'd be absolutely right. The difference is that Izzi is played by Tony winner — and wheelchair user — Ali Stroker.

When the script for "Christmas Ever After" came her way, Stroker — who has been a vocal proponent of inclusive casting and casting disabled performers in any role — was immediately drawn to how the role didn't require a disabled performer specifically. "I was so thrilled to see disability wasn't necessarily a part of the story," Stroker told IndieWire. "I believe that is progress. We don't always need to talk about addressing a disability in a narrative. There can be a love story with somebody with a disability…that maybe doesn't need to be explained." Stroker's casting, according to director Pat Kiely, was a mutual decision by both Lifetime, as well as the feature's producers. "It was presented to me and I was like 'Cool, this is a great idea,'" he said.

For Kiely — who has worked as a director for over a decade — working with a disabled performer was uncharted territory. "I grew up in Montreal [and] there was this program where they brought in a few kids each year to a disabled school," he said, but outside of that he hadn't interacted much with disability in a professional capacity. He cited Stroker for taking the reins and working with him to make Izzi a character whose disability is never a factor or limitation. "He [Pat] was so open to all my suggestions in ways that I thought would make the story more authentic," Stroker said.

Watching "Christmas Ever After," especially as a disabled consumer, is refreshing purely for those suggestions that have never been showcased in a movie (unless the story is about how a disabled person overcomes their issues). "I've never seen somebody drive with hand controls in a movie," Stroker said. "It's so funny, too, because so often people are like, 'Can you drive? How do you drive?'"

What takes on even more significance is Stroker herself, a disabled woman whose character is presented as confident, ambitious, and desirable. Too often when disabled women are featured onscreen, they're never given romantic aspirations. To watch Stroker's Izzi go on a date is to give disabled girls an introduction into how dating and romantic moments are different with a wheelchair. "I really let her [Stroker] take the lead," Kiely said. "She shared a lot of personal things in her own life. There's a real romantic scene where Daniel [di Tomasso] takes her hand and pulls her up this ramp. She [Stroker] said her and her fiance, when they have romantic strolls together….that's how they do that."

Another element Stroker brought to Kiely's attention that he didn't know about was the distinctions in height, which became a key factor in not just blocking but character development. "These movies are often about a couple who are at odds but have a connection," he said. "[I'd] keep Daniel standing in the first half of the movie but then, slowly, have him sit down more, come down to her level [and] see her more." Stroker and di Tomasso talked regularly about how he'd be standing and where the camera would be, in the hopes of showing how the figurative dance that takes place between a couple falling for each other can work with a wheelchair. "Those things are just so important because they bring in representation that's not usually part of the story," Stroker said.

The fairytale romance of "Christmas Ever After" doesn't just begin and end with its romantic plotline, but in creating a world free of accessibility concerns. Stroker understands the movie is idealized in having Izzi not run into any physical barriers, but she hopes by watching her character in these spaces that it will spark conversation about changing locations to meet disabled needs. "If we want a world where there are shorter counters shouldn't we create that to show people that they can have lower desks?" she said. "In order for us to progress we need to see how it can — because somebody who is able-bodied may not recognize that."

Accessibility also extended to the sets as well. "We shot in a brownstone and they built a ramp for me to get into that brownstone," Stroker said. "They went out of their way to make all the locations and all of the sets accessible, and the reason they did that is because it's what should be done." Stroker said she doesn't worry about advocating for herself on-set because her requests are no different than any other actor on a production; it's what she needs to be successful as a performer. "When you hire someone who needs certain accommodations it's not a favor, it's part of hiring someone," she said. "Every person who goes to work needs certain things. A ramp is not that big a deal."

Kiely said it's certainly compelled him to look at his own sets going forward, with the goal of hiring more disabled talent. In the meantime, he believes young women watching "Christmas Ever After," especially disabled women, will feel seen. "I hope…that some little girl with a disability sees the movie and it ignites their own romantic fantasy," he said.

As a former little girl who dreamed of watching a disabled Molly Ringwald get the guy, watching "Christmas Ever After" certainly gave me what I'd been missing all these years.

"Christmas Ever After" airs on Lifetime on Dec. 6.