What we owe the COVID fallen: Acting as if "essential" workers' lives mattered

Our "essential" workers have been deemed expendable by Trump's hateful theatrics. It didn't have to be this way 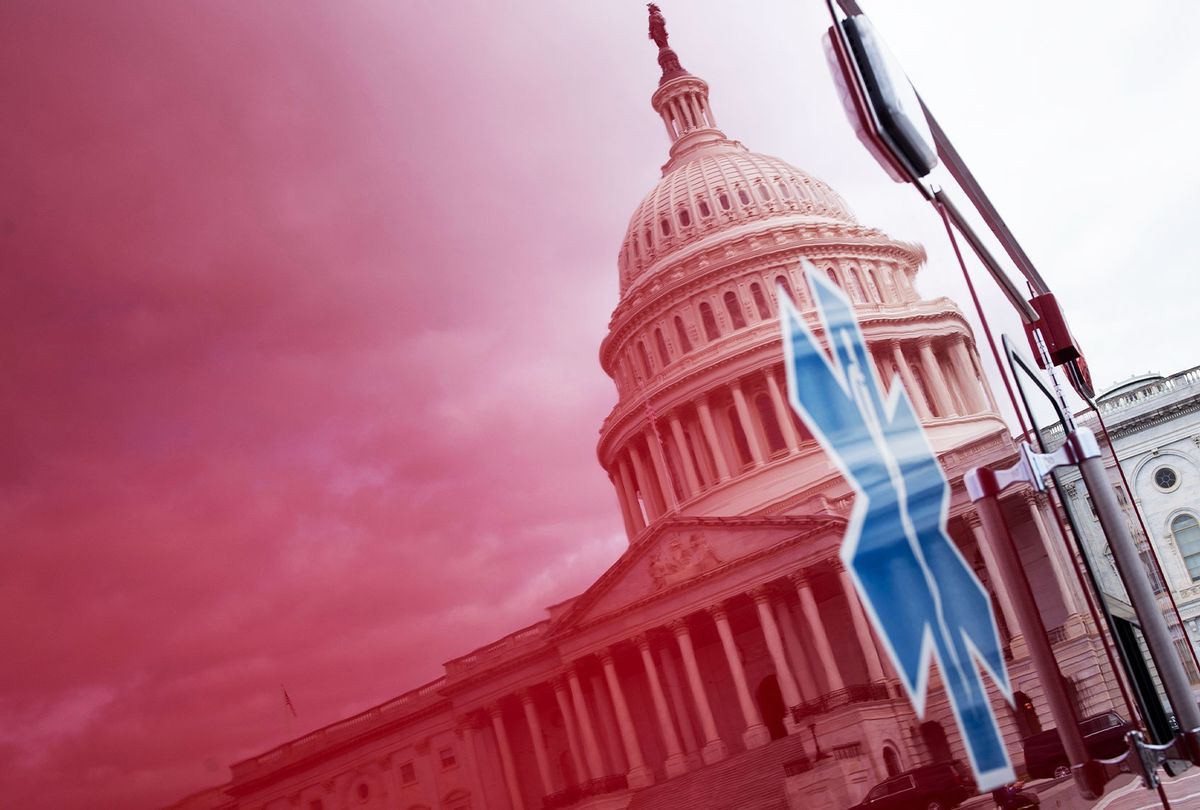 A view of the Capitol's Rotunda is seen reflected in an ambulance on Capitol Hill, in Washington, DC. (Brendan Smialowski / AFP) (Photo by BRENDAN SMIALOWSKI/AFP via Getty Images)
--

One of the worst consequences of the distraction surrounding how Donald Trump is handling his electoral defeat is that it has relegated the daily loss of essential workers to COVID to a kind of background music we hear in the supermarket.

No one knows for sure how many essential workers have perished from the deadly virus. No one knows what percentage of the 15,000 COVID deaths in New Jersey, my home state, or of the nation's close to 300,000 virus deaths are attributable to preventable occupational exposures that essential workers sustained while helping others.

Passaic firefighter and EMT Israel Tolentino, age 31, who died on March 31, is believed to be the first uniformed first responder to perish in our state. Just a few days later, Paterson police officer Frank Scorpo, 34, also died from the deadly virus.

Tolentino left behind his wife and two small children, as did Scorpo.

But the uniformed first responders are just a fraction of a COVID-19 honor roll that surely has to include transit workers like Robert Elijah, 61, of Cliffwood, a power rail mechanic for the PATH commuter rail line and a member of International Brotherhood of Electrical Workers Local 864.

Elijah died on April 23 and was survived by his wife, three children and 12 grandchildren.

Across the country, the carnage wrought by the pandemic in the health care workforce has resulted in hundreds upon hundreds of fatalities like 56-year-old emergency room nurse Pamela Orlando, who worked at Valley Hospital in Ridgewood, New Jersey, and spent the last weeks of her life using video to document her losing battle with COVID.

A joint investigation by the Guardian newspaper and Kaiser Health News has estimated that more than 1,300 health care professionals have lost their lives to the deadly virus and that in some states health care workers might make up 20 percent of cases.

With the complete lack of a unified federal strategy what has developed is a badly fractured state-by-state and even city-by-city response. As a consequence of this federal abdication, there's been a great squandering of the lives and the health of the essential workforce and their families, depending on the level of denial by their state and local officials.

These workers, who could easily number in the tens of thousands, were in essence deemed expendable by President Trump, who recklessly ignored the guidance of his own CDC. He downplayed the seriousness of the virus, pressing ahead in full campaign mode to open up the economy at any cost.

The Trump-Pence team's decision to double down with a full campaign schedule not only put an untold number of local first responders, health care professionals and other essential workers at risk, it sidelined 300 Secret Service agents and uniformed officers.

"Trump has frowned on mask wearing at the White House, and some Secret Service personnel have privately complained to colleagues that they were instructed by presidential detail agents not to wear masks in his presence," the Washington Post reported.

The Trump-Pence wanton disregard for the virus's life-altering and deadly consequences for those sworn to protect them extended to the entirety of the nation's essential workforce on a scale that must be fully investigated by a 9/11 commission-type probe.

It can't be allowed to stand for the ages without a thorough investigation that will also act as an essential after-action report on what history may judge as the most spectacular failure of a modern government to protect its own people and its own civil servants.

Nine months into this once-in-a-century public health crisis, the Occupational Safety and Health Administration has been totally missing in action and has failed to issue enforceable workplace health standards specific to COVID-19, which has already killed thousands upon thousands of essential workers.

New Jersey residents should take some pride in the fact that our state appears to be leading the nation in filling that massive gap in workplace protections for essential workers with a 13-page executive order signed by Gov. Phil Murphy on Nov. 5.

The how — as important as the what

Murphy's directive, which covers both public and private sector employers, was the result of extensive consultations with the CWA and SEIU, as well as grass roots community groups like Make the Road New Jersey, which advocates for immigrant households who are the backbone of the essential workforce.

Under Murphy's order, employers have an obligation to make sure the workers that have to work outside their home are guaranteed the basics like masks and hand sanitizer they need to keep themselves and their families safe.

In addition, prior to each shift, employers are required to conduct daily health checks of employees and to "immediately separate and send home employees who appear to have symptoms" of the highly contagious virus.

The measure, believed to be the first of its kind, builds on New Jersey's Public Employees Occupational Safety and Health regulations, which established a process for lodging and investigating of health and safety complaints from public workers as well as employer and employee training.

"The really impressive part of this is that it applies to everyone," said Hetty Rosenstein, the Communications Workers of America's state director for New Jerse. "It provides a set of standards and some enforcement for workers who are not represented [by a union], and that is pretty good."

New Jersey has also taken the lead nationally in extending a workplace presumption to essential workers when it comes to their being able to access the workers compensation system, in the event they are disabled by the virus.

Yet Rosenstein, who leads a union that represents tens of thousands of state, county and municipal workers, notes that even within New Jersey's public sector there is a wide divergence between how seriously managers take COVID workplace protections, often depending on their political and ideological orientation.

The CWA has lost dozens of members to the virus, Rosenstein said. "We lost a good number in the beginning and I am worried about now especially for our workers" who regularly interface with the public through their jobs and New Jersey's Department of Children and Families.

"Nobody knew or really understood how bad this was initially and they did not have testing, they didn't have PPE, they did not have supplies," Rosenstein recalled. "So we were asking for masks for our workers when health care workers in hospitals didn't have them. We were told they could not even bring their own because they said then people would start saying, 'Hey, wait a minute, I need a mask too.'"

Consider the tragic fate of Priscilla Carrow, 65, a coordinating manager who worked for New York City's Elmhurst Hospital, a municipal facility in Queens that was hit especially hard by the virus last spring. She was a shop steward with CWA Local 1180, and was responsible for handing out masks to frontline health care workers. She was not permitted to wear one herself, and died from the virus in April.

"Part of her job was to distribute PPE [masks] to make sure everyone working with the public, with patients, has face masks — everyone but herself, because there wasn't enough to go around," testified Gloria Middleton, president of CWA Local 1180, at a recent hearing. "If the city had stricter guidelines on health and safety protocols earlier this year, Priscilla Carrow and hundreds like her might still be with us today."

What is not widely reported is the swath of death and destruction wrought by the virus, not just through the essential workforce itself, but through their immediate and extended families, as well as increasing medical evidence of lingering and disabling symptoms among those who survive

Paul DiGiacomo, president of the NYPD's Detective Endowment Association, says his union has had to deal first-hand with the repercussions of the health implications for the family of a detective who was exposed to COVID and died.

"One of our detectives had a two-year-old and a one-month-old child," DiGiacomo said in a phone interview. "When he came home from work, unfortunately he gave this virus to his wife and passed it on to the children as well. She had no support system, she was alone with young children, and we had to help her get through that situation."

He continued, "We still don't know the long-term effects of this — what's going to happen moving forward? How is it going to affect our society and policing moving forward?"

For DiGiacomo, the COVID-19 situation for first responders is analogous to what happened to them, and to residents of lower Manhattan, when they were told by the EPA after the 9/11 attack that the air was "safe to breathe" despite government testing that indicated otherwise and was suppressed to facilitate the timely opening of Wall Street.

The historical corollary is not lost on some members of Congress, including Rep. Bill Pascrell Jr., a New Jersey Democrat who chairs the House Ways and Means Subcommittee on Oversight. He has been tracking the impact of the virus on the federal workforce.

"I led my colleagues in demanding answers about how the Trump White House's negligence has likely put federal employees' health in needless danger," said Pascrell in a statement. "Any workers sickened by the government's incompetence, especially our front line first responders, should be adequately compensated, and families who lost loved ones should receive survivor benefits.

"When this government is blessedly ejected on Jan. 20, 2021," Pascrell continued, "there must be an accounting of how many lives were lost in the rush to reopen. And I'm sure no supporter of Donald Trump clapped for these needless deaths when attending his rallies. But look at the consequences of his actions."

Back in the spring a bipartisan effort led by Rep. Carolyn Maloney of New York, chair of the House Oversight Committee, resulted in drafting a bill to create a 9/11-style victims' compensation fund for the essential workforce and their families ravaged by COVID-19.

"Now, we need to pass my Pandemic Heroes Compensation Act to ensure that all essential workers and their families can get compensation if they or their loved ones become sick because they were called in to work," Maloney said in a statement. "Essential workers are keeping this country going, and they need to know that we will be there for them if they get sick."

In both red and blue states, in our town squares we have plaques and statues to honor fallen soldiers, even if their lives were lost in an unpopular war.

Historians rank armed conflicts by the body count, the dead and the wounded. It's an exercise that honors the dead but also holds the living accountable for their sacrifice.

Can we afford to do any less for members of our essential workforce killed or disabled by a pandemic for which our nation was so ill-prepared, and which our government at its highest levels denied was a problem, even as the mounting body count daily proved otherwise?