"I want to apologize for contributing to these social inequalities, even though I didn’t realize it at the time" 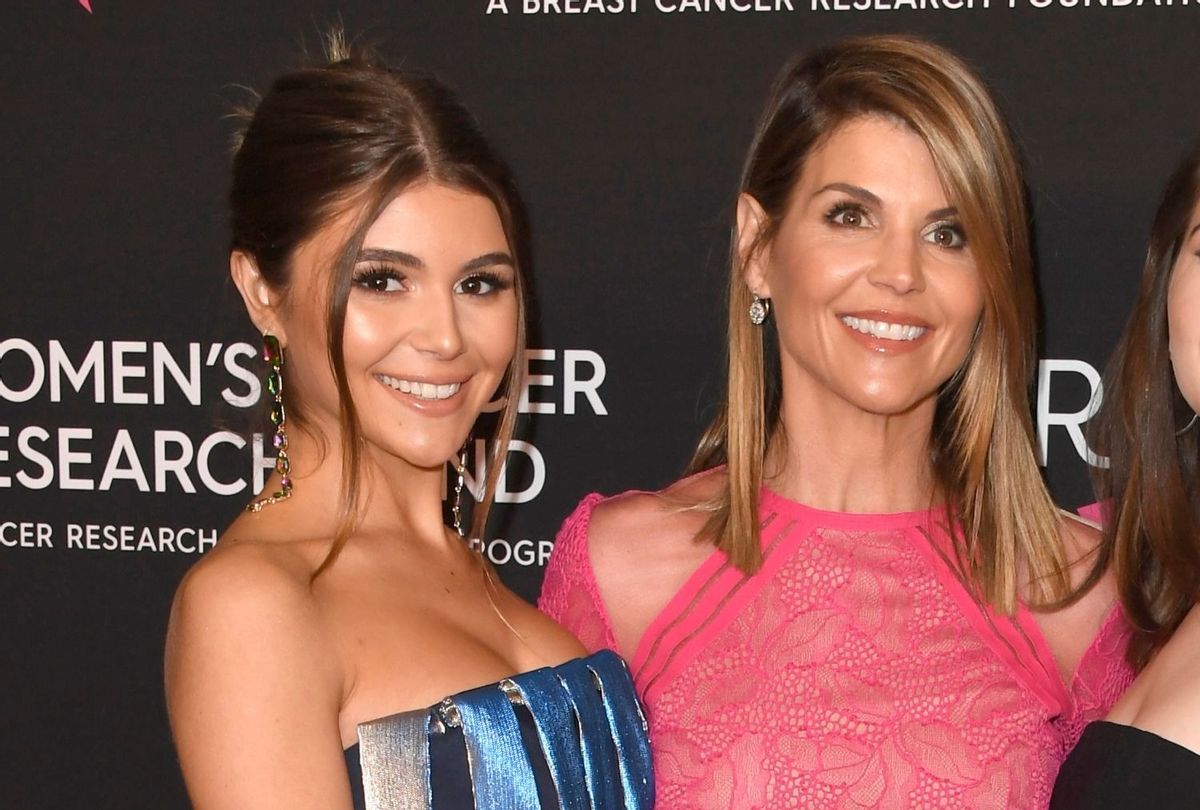 While both of her parents are serving time in prison, Olivia Jade Giannulli sat down on "Red Table Talk" to break her silence on the college admissions scandal from last year.

Giannulli — a lifestyle and beauty influencer who is the daughter of "Full House" actress Lori Loughlin and multi-millionaire fashion designer Mossimo Giannulli — was accepted to USC after her parents paid $500,000 to fraudulently have her and sister admitted to the university as phony crew recruits, though they had never participated the sport.

"On paper, it's bad. It's really bad," the influencer said on the Facebook Watch show. "But I think what a lot of people don't know is that my parents just came from a place of, 'I love my kids, I just want to help my kids. Whatever is best for them,'" she explained of Loughlin and Giannulli. "I think they thought it was normal."

The 21-year-old admitted to living in a "bubble" and having little awareness of her privilege, at the time of the scandal. She explained that paying your way into college, legally, is not uncommon in the world in which she grew up, so she did not realize the severity of her parents' crimes when the scam was exposed. She says she learned about the scandal as news broke online.

"When all this first happened and it became public, I remember thinking — my thoughts are completely different now —  'How are people mad about this?' I know that sounds so silly, but in the bubble that I grew up in, I didn't know so much outside of it. A lot of kids in that bubble, their parents were donating to schools and doing stuff that advantaged," she said. "It's not fair and it's not right, but it was happening. And so, when this first came out, I was like, 'I don't really understand what's wrong with this.'"

"I didn't realize at the time that was privilege," she continued, saying that she has learned over the past year-and-a-half. "I didn't put those two together. I was like, 'Well, this is what everybody does, and my parents worked really hard and I don't understand.' But that's not how it should be and unfortunately, that's how it was, and I'm grateful for this situation to see that big change and that big difference in my own mind."

Before Giannulli joined the three co-hosts at the red table, Jada Pinkett Smith's mother, Adrienne Banfield Norris, said she did not want her as a guest on the show, especially with the backdrop of the pandemic and the Black Lives Matter movement. "I just found it really ironic that she chose three Black women to reach out to for her redemption story…it's bothersome to me on so many levels," Banfield Norris said. "Her being here is the epitome of white privilege, to me."

Throughout their dialogue, Giannulli said she is not trying to victimize herself. "I don't want pity. I don't deserve pity," she said. "What's so important to me is to learn from the mistake — not to now be shamed and punished and never given a second chance because I'm 21. I feel like I deserve a second chance to redeem myself, to show I've grown."

Later on, she explained, "I didn't come on here to try and win people over…I just want to apologize for contributing to these social inequalities, even though I didn't realize it at the time."

While she said she is not looking for sympathy, she feels she has been misunderstood, and admits that she was "not fully aware of what was going on," as she was applying to colleges.

Her parents, Loughlin and Giannulli, were charged along with more than 50 people as part of the FBI investigation dubbed "Operation Varsity Blues," which was exposed by federal prosecutors in early 2019. The couple maintained their innocence for over a year, before finally pleading guilty in May 2020. Loughlin is currently serving a two-month sentence, which is expected to end before the new year, and Giannulli is serving a five-month sentence, having played a more active role in the scam.

Giannulli says she has not spoken to her parents since they've been in prison, but recalls when she confronted them about the scandal when she was "ashamed" and "embarrassed," as the story spiraled, making international headlines.

"They didn't really have much to say expect like, 'I'm so sorry. I really messed up in trying to give the best to you and your sister,'" she shared of her conversations with her mother and father. She says she knows her parents have "struggled" throughout this process, and she believes their time in prison will give them a period to re-think what happened.

"It's been hard. I think for anybody, no matter what the situation is, you don't want to see your parents go to prison. But also, I think it's necessary for us to move on and move forward," Giannulli said. "I'm super close with my parents, especially my mom, she's like my best friend, so it's definitely been really hard not to be able to talk to her, but I know she's strong and I know it's a good reflection period."

When asked by Pinkett Smith if she ever went back to USC, Giannulli said, "I never went back. I was too embarrassed — you know what, I shouldn't have been there in the first place, clearly, so there was no point in me trying to go back."

In the aftermath of the conspiracy scandal, Giannulli, who has over one million followers on Instagram and nearly two million on YouTube, where she is a beauty vlogger, lost major brand deals with companies like Tresemmé, HP, Lulus and Sephora, who had a cosmetics collection with the influencer.

"What were some of the repercussions throughout this whole situation?" Pinkett Smith asked, adding, "Because you're a beautiful young white woman who's been born into privilege, so there will be some people who feel like, 'She'll be fine.'"

Giannulli specifically noted that one of her now-infamous social media videos makes her "cringe" where she said she was excited to participate in social events at college, but not excited to be going to school. "It's embarrassing that I ever said those types of things," she reflected. "There was no malicious intent behind it. I was never trying to hurt anybody or say those things to brag about my life. I was oblivious."

At one point, Banfield Norris shared her frustration with the entire scandal, illuminating the issue of racial inequality. "'Child, please,'" she said. "I am exhausted with everything that we have to deal with as a community and I just don't have the energy to put into the fact that you lost your endorsements or you're not in school right now because, at the end of the day…your parents are going to go in and they're going to do their 60 days and they're going to pay their fine and you guys will go on…and you will live your life, and there are so many of us that it is not going to be that situation. It just makes it very difficult right now for me to care."

By the end of the 30-minute conversation, the three women and Giannulli came to peace with the fact that the beauty influencer is committed to learning and growing. Pinkett Smith was pleased that she is now "aware" of her privilege and is looking forward to investing her time in understanding the experiences of those in communities other than her own.

"I know right from wrong," Giannulli said, "I just never knew the depth behind it."