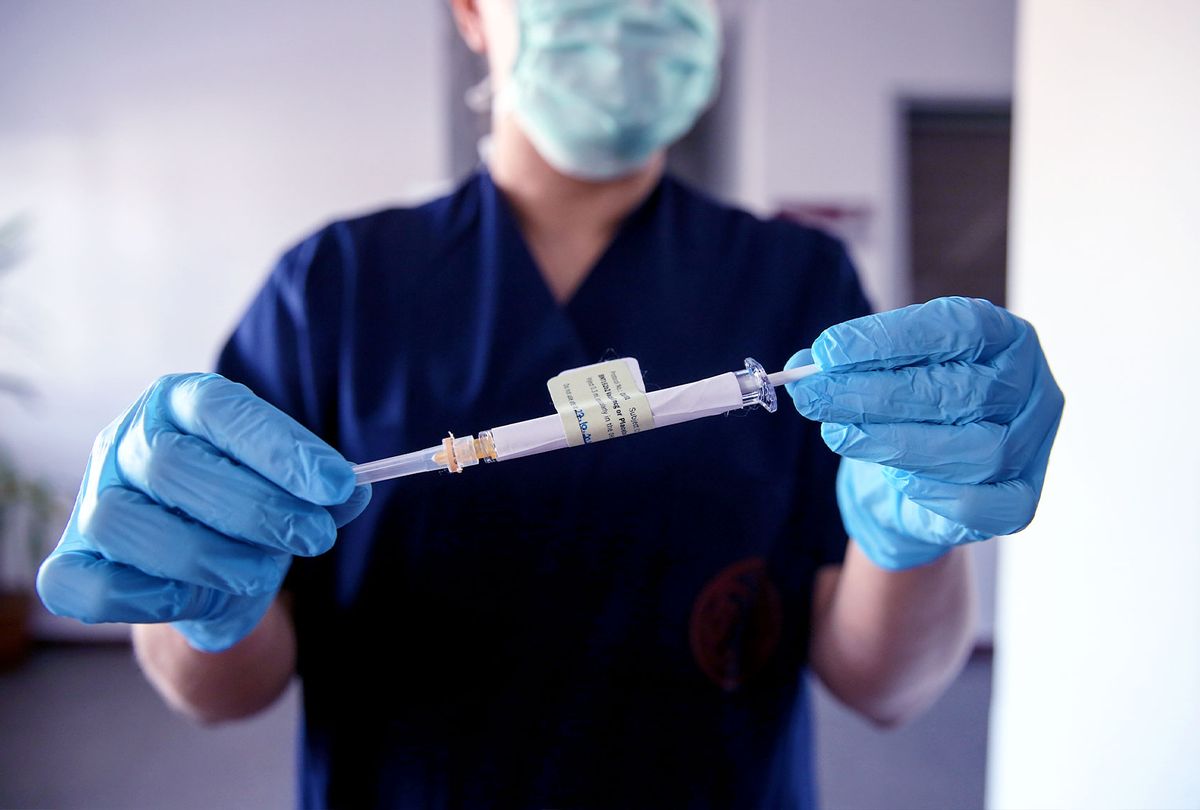 A health care worker holds an injection syringe of the phase 3 vaccine trial, developed against the novel coronavirus (COVID-19) pandemic by the U.S. Pfizer and German BioNTech company, at the Ankara University Ibni Sina Hospital in Ankara, Turkey on October 27, 2020. (Dogukan Keskinkilic/Anadolu Agency via Getty Images)
--

As the U.S. Food and Drug Administration on Friday granted its first emergency use authorization for a Covid-19 vaccine, justice campaigners continued pressuring governments of rich countries like the United States to work harder to ensure that people across the globe—particularly those in poorer countries—have equal access to coronavirus vaccination.

Developed by American pharmaceutical company Pfizer and German drugmaker BioNTech, the vaccine now authorized for distribution in the United States has also been approved by the necessary officials in Bahrain, Canada, Saudi Arabia, Mexico and the United Kingdom. The New York Times reports that "other authorizations, including by the European Union, are expected within weeks."

The U.S. approval came after President Donald Trump on Tuesday signed a "largely symbolic" executive order directing pharmaceutical companies to prioritize Americans for vaccines, which critics condemned as "morally and strategically misguided." It also followed White House chief of staff, Mark Meadows, reportedly telling FDA Commissioner Dr. Stephen Hahn that he should be prepared to submit his resignation if the Pfizer-BioNTech vaccine wasn't authorized on Friday.

In a statement Friday, Hahn called the authorization "a significant milestone in battling this devastating pandemic that has affected so many families in the United States and around the world," adding that "the tireless work to develop a new vaccine to prevent this novel, serious, and life-threatening disease in an expedited timeframe after its emergence is a true testament to scientific innovation and public-private collaboration worldwide."

Despite the commissioner's international tone, advocacy organizations across the globe continue to accuse the U.S. and other wealthy nations of vaccine hoarding. Earlier this week, members of an alliance calling for a #PeoplesVaccine warned that nine out of 10 people in poor countries are set to miss out on COVID-19 vaccination in 2021, even though multiple vaccines are currently in development, often funded by public money.

"Nearly 70 poor countries will only be able to vaccinate one in 10 people against COVID-19 next year unless urgent action is taken by governments and the pharmaceutical industry to make sure enough doses are produced," according to a group that includes Amnesty International, Frontline AIDS, Global Justice Now, and Oxfam. "By contrast, wealthier nations have bought up enough doses to vaccinate their entire populations nearly three times over by the end of 2021 if those currently in clinical trials are all approved for use."

"The hoarding of vaccines actively undermines global efforts to ensure that everyone, everywhere can be protected from COVID-19," said Steve Cockburn, Amnesty's head of economic and social justice, in a statement Wednesday.

"Rich countries have clear human rights obligations not only to refrain from actions that could harm access to vaccines elsewhere, but also to cooperate and provide assistance to countries that need it," he added. "By buying up the vast majority of the world's vaccine supply, rich countries are in breach of their human rights obligations. Instead, by working with others to share knowledge and scale up supply, they could help bring an end to the global COVID-19 crisis."

Dr. Mohga Kamal Yanni of the People's Vaccine Alliance warned that "the current system, where pharmaceutical corporations use government funding for research, retain exclusive rights, and keep their technology secret to boost profits, could cost many lives."

"No one should be blocked from getting a life-saving vaccine because of the country they live in or the amount of money in their pocket," said Anna Marriott, Oxfam's health policy manager. "But unless something changes dramatically, billions of people around the world will not receive a safe and effective vaccine for COVID-19 for years to come."

Global Justice Now campaigner Heidi Chow urged all pharmaceutical companies and research institutions working on a COVID-19 vaccine to "share the science, technological know-how, and intellectual property behind their vaccine so enough safe and effective doses can be produced," and governments to ensure that Big Pharma "puts people's lives before profits."

Lois Chingandu, director of Frontline AIDS also delivered a message to vaccine developers, declaring that "we need to put pharmaceutical industry profit aside during this unprecedented pandemic, both to save humanity and the economy."

Their calls for international cooperation and warnings of what will happen in its absence were echoed by Abby Maxman, president and CEO of Oxfam America, and Dr. Vanessa Kerry, a critical-care physician at Massachusetts General Hospital and founder and CEO of Seed Global Health, in an opinion piece published Saturday in The Boston Globe.

"These vaccines will have zero percent effectiveness for those who can't access or afford them," they wrote. "A scientific breakthrough toward a vaccine is crucial, but its power is muted if not coupled with an equitable access and distribution plan. To achieve this, novel and thoughtful approaches to global vaccine production and distribution are needed."

"In a pandemic of this magnitude, we must pursue a new path of prioritizing public health at a global level," Maxman and Kerry added. "That's why we have joined more than 100 leading public health, economic, business, and racial justice leaders to call on the U.S. government to make the upcoming COVID-19 vaccines a people's vaccine: a global public good, fairly available to all, and prioritizing those most in need everywhere around the world."

Campaigners are planning a global day of action for Monday to demand a people's vaccine. According to Global Justice Now, one of the organizers, "We will be targeting Pfizer, Moderna, and AstraZeneca with a day of mass calling, emails, and social media messages, to make sure our demands are not ignored."