Mass protests for reproductive rights erupt in Poland: Why Americans should learn from them

Poland is a reminder that when authoritarians take power, attacks on reproductive rights often follow 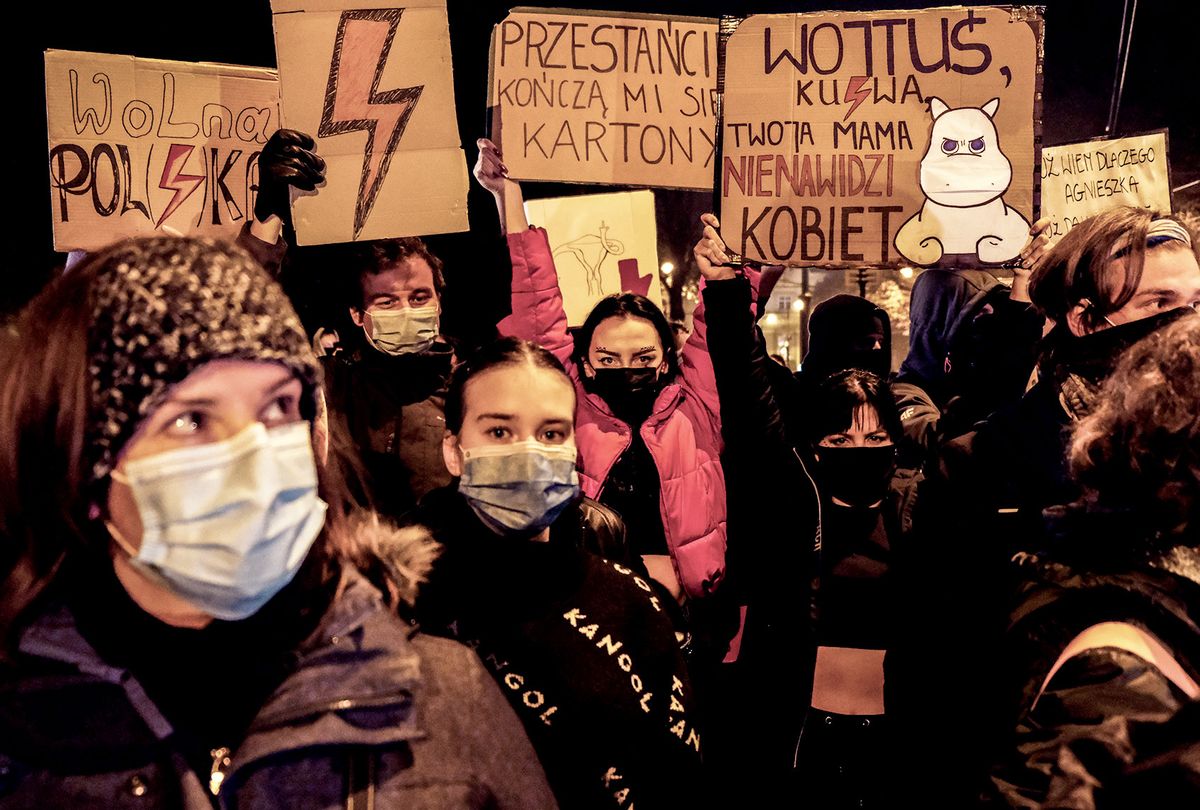 Protesters hold banners and shout slogans during the 12th day of protests against the Constitutional Court ruling on tightening the abortion law in front of the Archbishops Palace on November 02, 2020 in Krakow, Poland. The country's constitutional tribunal recently ruled that terminating pregnancies due to serious, irreversible fetal defects is unconstitutional. The decision sparked a wave of protests against the ruling Law and Justice party (PiS). (Omar Marques/Getty Images)
--

Just as voters in America were taking part in a historic presidential election, the women of Poland were taking to the streets. Up to a million people daily have taken part in mass demonstrations against Poland's near-total ban on abortion and the ultra-conservative regime that imposed it.

The ban, approved by the country's constitutional tribunal, outlaws abortions even in cases of serious fetal abnormalities. The response has been the largest mass protests since the Solidarity movement brought down the communist government in the 1980s.

Led by a grassroots group called Ogólnopolski Strajk Kobiet (All-Polish Women's Strike), the demonstrators have also taken aim against the government's authoritarian and anti-democratic policies more broadly. Poland's ruling Law and Justice party is conservative, patriarchal and closely tied to the Catholic church. It won a razor-thin victory in July on a platform rife with anti-LGBT and anti-Semitic sentiment and continues to pursue a strategy intended to motivate its conservative base.

If any of this sounds familiar, it should. President-elect Joe Biden's victory over Donald Trump was an enormous relief, but having a supporter of abortion rights in the White House should not make us complacent. With conservatives holding a majority on the Supreme Court and in state legislative chambers nationwide, Americans should be ready to agitate, organize and protest like our rights depend on it.

First, the fight for reproductive rights is inextricable from the global effort to advance human rights. What's happening in Poland is a reminder that when authoritarian regimes undermine democratic values, attacks on reproductive rights often follow. It is no accident that the countries that joined the Trump administration in repudiating the right to abortion at the United Nations were largely repressive governments with records of violating human rights. Freedom cannot exist without reproductive freedom.

That is why abortion rights must be situated within a broader framework of human dignity, individual autonomy and civil rights. Polish demonstrators' demands extend well beyond reproductive rights – to LGBTQ rights, women's rights, greater access to health care and more separation between church and state. Abortion access is fundamental not only to women's ability to participate equally in society, but also to all people's right to be themselves.

Second, mass demonstrations work – especially when they are organized from the ground up. In response to the All-Polish Women's Strike, Poland's ruling party has paused implementation of the ban and is calling for talks. Adam Mrozowicki, a sociologist at the University of Wrocław, described the protests to the Guardian as "decentralized, locally based, grassroots. And personally, in 20 years, I've never seen anything like these numbers." Harvard University's Erica Chenoweth has found that catalyzing meaningful political change takes around 3.5% of the population actively participating in protests, or about 11 million people in the U.S. This is not an insurmountable goal. Polling suggests that about 15 million to 26 million people in the United States participated in Black Lives Matter demonstrations over the death of George Floyd, Breonna Taylor and others.

Finally, the Polish demonstrators belie the notion that the left should soften its stance on abortion or avoid talking about the issue of abortion altogether. The Polish demonstrators' symbols and language are raw, unapologetic and confrontational. The primary symbol of the protest is a red lightning bolt, created by designer Ola Jasionowska, who says that it symbolizes "watch out, beware, we won't accept that women are being deprived of their basic rights." Among the protesters' most widespread slogans has been "Wypierdalać", a vulgarity that translates roughly as "Fuck off."

As right-wing politicians here in the U.S. strengthen their hold on the Supreme Court and state capitals around the country, it is clear they have every intention of using that power to dictate women's personal medical decisions and criminalize abortion care. It would behoove us to remember that this is not just some abstract policy making exercise, but rather, these policies dramatically affect the lives of real people trying to access reproductive health care.

Poland's mass demonstrations remind us of the power of protest, even in the most hostile political environment.

Don't put away your pink pussy hat yet. Winter is coming.

Julie Burkhart is the president of Wellspring Health Access and the founder of Trust Women. She worked for seven years with Dr. George Tiller, who was murdered in 2009.