As the pandemic slammed their businesses, some chefs and catering businesses found a new calling 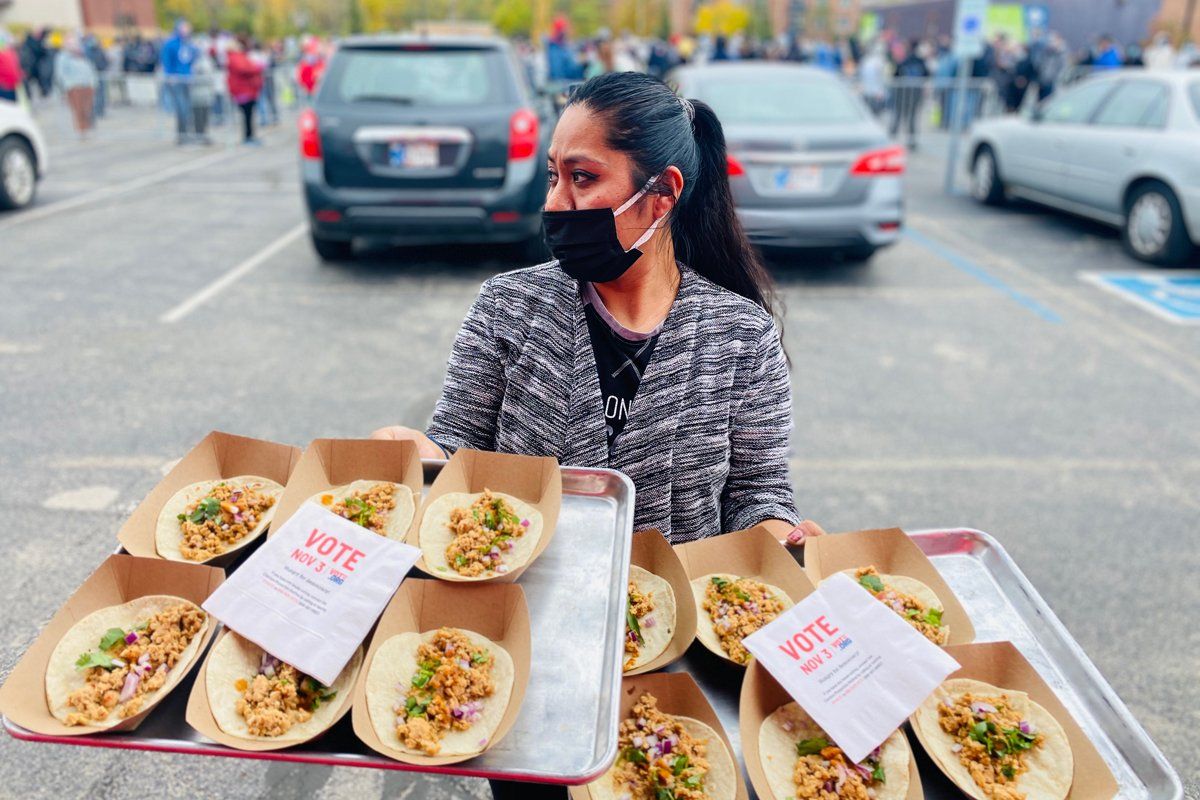 For Nikeisah Newton, 2020 started off on a promising note. Just a year earlier, Newton had launched Meals 4 Heels, a catering and delivery company serving vegan and vegetarian meals to Portland, Oregon's sex worker community — and it was going well. Then the pandemic happened.

As social distancing measures stopped most in-person sex work from taking place, her business dried up.

"Most strip clubs closed in Portland, so I turned my focus to community-based social justice organizations," said Newton.

Then, when George Floyd, Breonna Taylor and Jacob Blake were killed at the hands of police, and thousands of Portlanders took to the street to protest, Newton decided to start feeding the protesters hitting the streets instead.

Newton was asked to help feed protesters from multiple mutual aid groups. "Meals were going for a $8 suggested donation, but no one would be turned away," she said. "If you want to show support this is how you do it. You buy from Black businesses. I'm a Black female chef in Portland . . . a predominantly White city."

Newton is far from alone in her efforts: In addition to feeding people impacted by the economic downturn caused by the pandemic, a wide range of food trucks and catering companies across the country stepped up to feed the millions who took the streets in racial justice protests earlier this year. Those trucks and others returned in October and November to help feed people waiting in long lines at the polls. Using everything from pay-what-you-can models to foundation funding, these efforts have helped keep small businesses afloat while filling important nutritional gaps where they can.

During the height of the protests in New York, a group of culinary activists combined forces to feed protesters in the Bronx. The Bronx-based culinary collective Ghetto Gastro and the nonprofit Rethink Food teamed up to use donations to feed people who took to the streets demanding justice.

Rethink used upcycled U.S. Postal Service vans to create a donation-based mobile version of their Rethink Café. The group distributed meals in the Bronx and across New York City. "At the core of our work we want to be there to support our communities and nourish them. We believe when communities are nourished they thrive," Rethink Food executive director Meg Savage told Civil Eats.

Similar projects popped up across the country, including others in Portland, Oregon and Dallas, Texas.

But with the increased momentum, many food trucks were also increasingly exposed to people who weren't as keen on their message. They became targets. That was the case for Riot Kitchen, which launched this past spring as a mutual aid organization in Seattle amidst the protests there.

As protests continued to take place nationwide, they took their mutual aid program on the road. Riot Kitchen (which did not respond to Civil Eats' request to comment for this story) was the subject of consistent targeting by law enforcement while feeding protesters — most notably in August, in Kenosha, Wisconsin, following the police shooting of Jacob Blake.

According to the Seattle Times, they were stopped alongside volunteers at a gas station filling up canisters they intended to fuel generators use to cook food to feed protesters. According to police reports, the officers assumed the volunteers were going to use the fuel to incite riots. They arrested nine members of the group for disorderly conduct. The police response to Riot Kitchen is indicative of the systemic behavior that launched these protests in the first place.

That was the summer. Then, election season rolled around. Taking advantage of the grassroots momentum from caterers and food trucks in supporting the protests, comparable groups headed to the polls. Vote.org, a tech organization focused on breaking down barriers to voting, partnered with local food truck operators to bring Vote.org-branded food trucks to lines of voters and voter-education initiatives around the country. In addition to food they offered information about voting and connected voters with nonpartisan Election Protection hotlines for any issues they had at the polls.

"Typically, we [provide] the tools that other organizations use to power their in-person registration events," said Sydney Rose, director of programs for Vote.org. This year, however, the organization turned to "not only give people access to our tools in a safe, socially distanced way but also a mutual aid opportunity. It was an opportunity to create some joy in a time where everything feels confusing and may be even scary."

While Rose saw the lines people had to wait in to vote as a form of voter suppression, she finds the long lines for food equally problematic. She says some communities they visited were facing high rates of food insecurity, and many people waited in line out of necessity. The trucks saw massive lines at polling stations in states like North Carolina, Pennsylvania, Wisconsin, Indiana, Michigan, Georgia and Texas. In some cases they gave away more than a thousand meals a day.

Like Vote.org, Pizza to the Polls, a nonprofit founded in 2016, also turned out food trucks to feed people at voting sites. This election cycle, they sent more than 66,000 pizzas to more than 3,000 polling locations in 48 states. They partnered with companies such as Uber to operate the trucks.

"As apocalyptic as 2020 has been, voting in this presidential election gave a lot of people hope. Food trucks helping to sustain voters cemented that feeling of community and invigorated countless American who stood on line for 2, 3, 4 plus hours," said Andra Tomsa, founder and CEO of spare, a national nonprofit working to end food insecurity.

"They especially focused on communities susceptible to voter suppression and voter intimidation and allocated most of their efforts to parts of the nation that have been hit hardest," said Tomsa.

Humanitarian chef José Andrés took a similar approach with an initiative called Chefs at the Polls. They served roughly half a million meals to voters at 735 polling locations in 235 municipalities. They worked with 500 restaurants and food truck operators nationwide ranging from Metzger's Bar and Butchery in Richmond, Virginia to Melba's in New York City.

"This movement has also made an effort to utilize trucks that are owned by women, minorities and veterans. They have been instrumental in allowing people to practice their right to vote and a welcome respite for those who struggle to string three square meals together due to the economic crisis," said Tomsa.

Now, as we face the winter months, it's not clear whether this distinctly 2020 trend will continue into next spring. As the nation inches closer to a COVID-19 vaccine, it's likely that indoor dining will return in 2021. Will food truck operators and caterers still be vectors for social justice when society is back to business as usual?

For Meals 4 Heels, the answer is a crystal clear yes. Even when business gets back to normal, Nikeisah Newton says the fight for equity will continue.

"It's a lifetime fight. It's ingrained in me, just like oppression and systematic racism is ingrained in the United States. Absolutely the fight and the support from Meals 4 Heels will continue," Newton said.