How Janet Yellen, Biden’s treasury pick, could shape the future of climate politics

Yellen is likely to be confirmed, and will play a major role in executing Biden’s ambitious climate goals 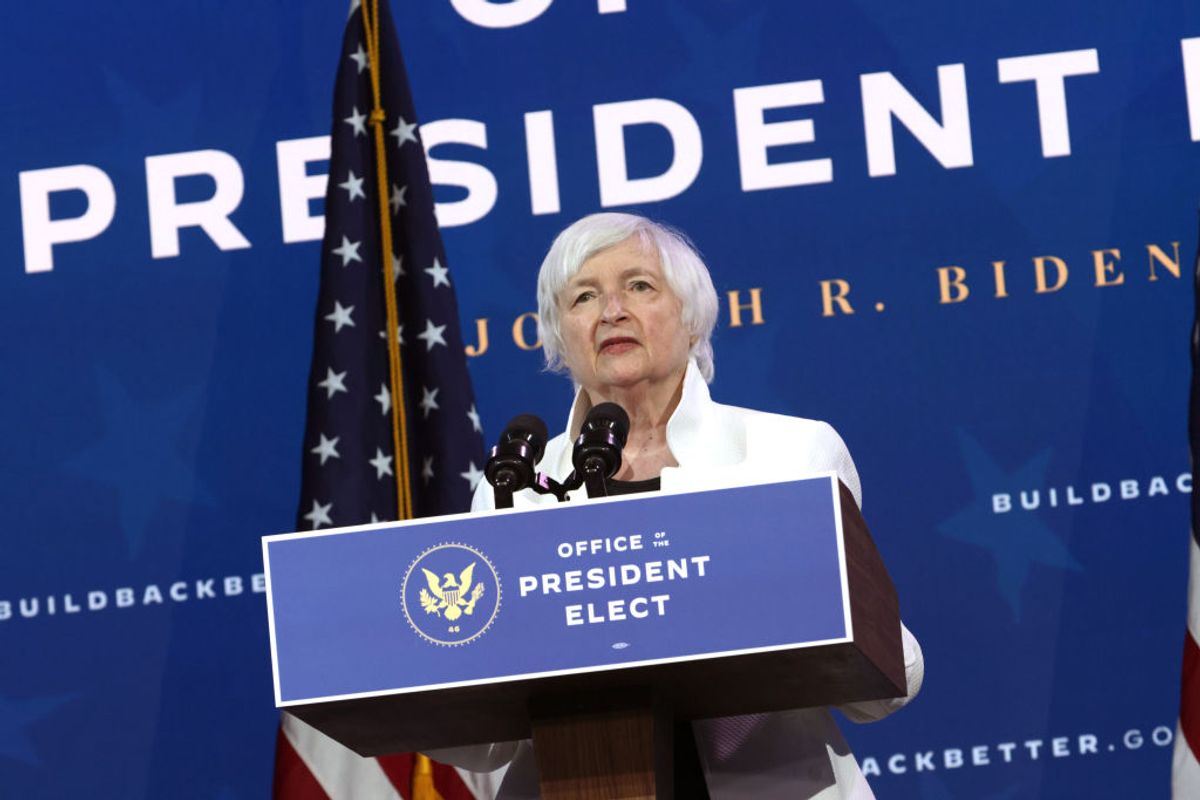 President-elect Joe Biden has a to-do list longer than a CVS receipt, but the very first thing he is expected to do once he is officially the president of the United States — besides rejoining the Paris Agreement — is launch a multipronged effort to revive the American economy.

In a throwback to 2009, when President Obama put then-Vice President Biden in charge of overseeing the largest clean energy investment in U.S. history, Biden has said he aims to make bringing down greenhouse gas emissions a central component of his administration's economic stimulus plan.

Combining economic stimulus and climate action was a tall order in 2009. If the Senate remains in Republican control, it'll be an even bigger lift in 2021. That's where Biden's cabinet comes in. On Monday, Biden announced his nominee for U.S. treasury secretary: Janet Yellen, who served as the first-ever female chair of the Federal Reserve under Obama.

The secretary of the treasury doesn't just oversee the department that prints the nation's money, pays its bills, and collects its taxes. If confirmed, Yellen, 74, will be a key Biden adviser, guiding the federal budget and shaping tax and spending policies. She will also be in charge of distributing congressional stimulus spending. That means Yellen stands to play a major part in executing Biden's climate goals.

"The Secretary of the Treasury and the Treasury Department are crucial to the success of the administration's efforts to move the U.S. and global economy to a low-carbon trajectory and to protect the economy from climate change shocks," a trio of leading economists wrote in a policy recommendation memo for a group called the Climate 21 Project in mid-November.

Yellen is uniquely qualified to help Biden deliver on his economic agenda, and she has long acknowledged climate change as a risk to global financial stability. She was vocal about that risk when she served as the 18th Chair of the White House Council of Economic Advisers under President Bill Clinton from 1997 to 1999. And she talked about the issue later in her career, as chair of the Federal Reserve from 2014 to 2018, and now as a distinguished fellow at the Brookings Institution.

So what does that mean in terms of what Yellen might accomplish as treasury secretary? Perhaps most notable foreshadowing came in 2017, when Yellen co-founded a nonpartisan, international think tank called the Climate Leadership Council (CLC). The CLC advocates for a price on carbon that starts at around $40 a ton and increases 5 percent every year. The money generated by the tax would be returned to Americans each year in the form of a quarterly check in order to offset the costs of increased energy prices. The CLC also advocates for a border-adjustable tax on imports that would penalize carbon-intensive products and reward energy-efficient companies. In exchange for putting a price on carbon, the CLC says the government should do away with some existing federal emissions regulations. The proposal is regarded suspiciously by some progressive climate groups, not least of all because oil companies like ExxonMobil and Shell were quick to sign on as "founding corporate members" of the plan. But the proposal is exactly what you'd expect a bipartisan bunch of economists and former secretaries of state to come up with.

A paper that Yellen recently coauthored said that "carbon prices alone are not enough," a good sign for climate advocates who hope she'll use the full powers of her position to push for emissions reductions beyond a carbon tax if confirmed. Evergreen Action, a climate policy and advocacy group started by former Jay Inslee campaign staffers, says there are a handful of steps the treasury secretary could take to mobilize national climate action. She could formally recognize the financial risks posed by fossil fuels and apply "enhanced prudential standards" to fossil fuel companies, which would allow the Federal Reserve to rein in fossil fuel investments on the basis of protecting financial stability. Yellen could also lead the charge on establishing a national green bank to help private companies invest in sustainable infrastructure. Yellen could even pressure international financial institutions, like the World Bank, to divest from fossil fuels.

But the fact that Yellen has been thinking seriously about putting a price on carbon bodes well for carbon tax advocates, too. Carbon taxes have fallen out of favor in recent years, as efforts to pass such measures stalled out in Congress and failed at the state level. On the campaign trail, Biden rarely talked about a carbon tax, preferring instead to focus on a green stimulus plan that proved to be quite popular with voters. But Biden could change his tune if Yellen is confirmed.

"I do see Republican support, and not only Democrat support, for an approach that would involve a carbon tax with redistribution," Yellen told Reuters in October. "It's not politically impossible."