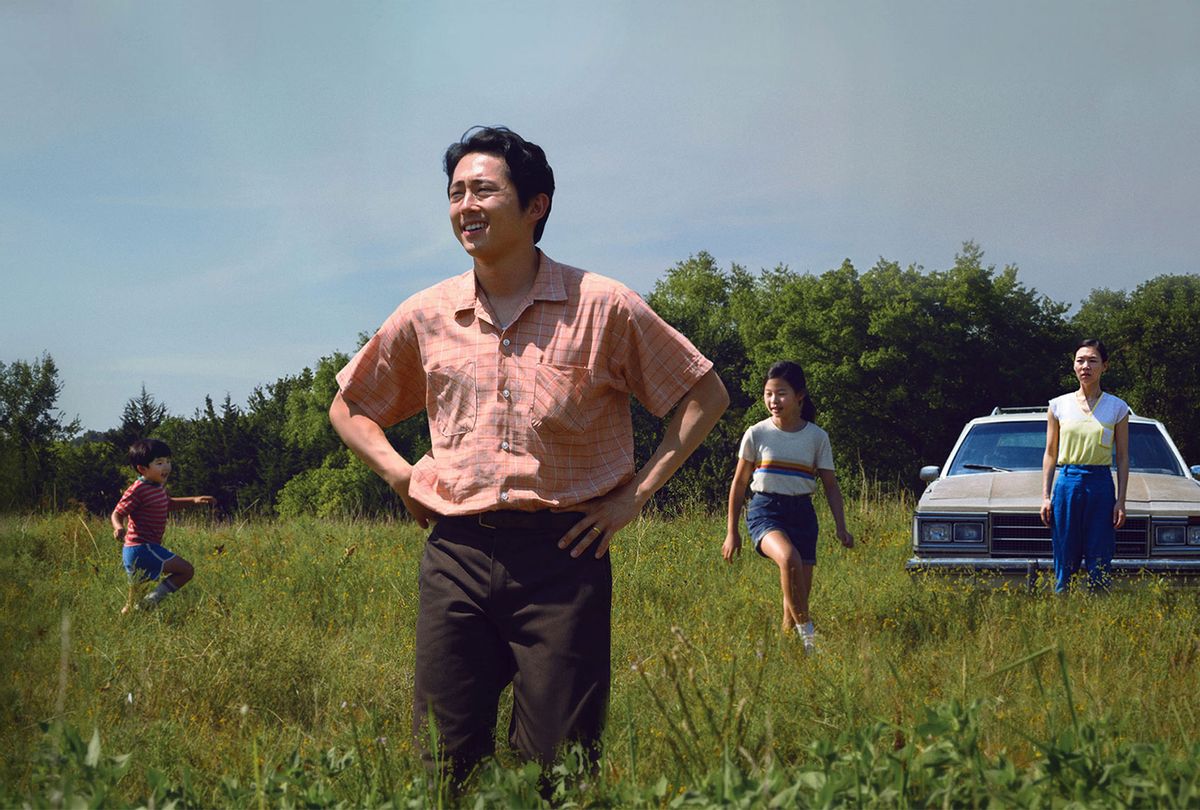 Editor's note: This review was originally published at the 2020 Sundance Film Festival. A24 will release it in virtual cinemas on Friday, December 11, with a theatrical release to follow in 2021.

Jacob Yi (Steven Yeun) and his wife Monica ("Sea Fog" star Yeri Han) emigrated from Korea together in the early '70s, but — after nearly a decade of scraping by as chicken sexers in California — they arrive at the Arkansas trailer home he bought for their family in separate cars. Monica drives the kids: A stoic pre-teen girl named Anne (the natural and grounded Noel Cho), and a precocious seven-year-old boy named David (newcomer Alan S. Kim, delivering one of the most crucial and transcendently honest child performances since Jonathan Chang in "Yi Yi"). Jacob drives the truck, which is full of its own precious cargo.

As he pulls up to the five-acre plot of disheveled Ozark farmland, stridently unaware that it defeated the last man who settled there, Jacob's eyes glint with a hellbent kind of happiness; it's the look of a man who's about to literally plant his roots in foreign soil. He sees this raw earth as a Garden of Eden that's waiting to be grown. A practical woman concerned about raising a son with a heart murmur in a town that's an hour away from the nearest hospital, Monica isn't quite convinced. How can they build a foundation for their family in a house on wheels? She glares at her husband in a way that implies a thousand unheard arguments, or the same argument a thousand times: "This isn't what you promised."

Gentle as the stream that flows through the Yi's property, and yet powerful enough to reverberate for generations to come, Chung's loving — and immensely lovable — immigrant drama interrogates the American Dream with the hard-edged hope of a family that needs to believe in something before they lose all faith in each other. Jacob is too proud to settle for somebody else's terms; he'll do anything to prove that he's leading his family to the promised land, even if no one else shares his vision of success. As clenched and corporeal here as he was loose and elusive in "Burning," Yeun is spellbinding as the engine driving the Yis into a new home so unstable that a tornado could pick it up and fling it across the country (production designer Yong Ok Lee does a brilliant job of gradually filling the once empty trailer with a rich sense of personal history over the course of the film).

By day, Jacob works at a coop where he assesses chicken genitals with the intensity of a Nascar pit crew. By night, he buries Korean produce in his farm, and wills the land into submission with some help from the eccentric Pentecostal next door (Will Patton). Jacob doesn't appear overly interested in blending in — he and Monica speak to each other in Korean at home, and a tentative Sunday morning at the local church doesn't seem to stick with him the way it does with his kids — but one way or another he's going to make this country his own.

Jacob is usually seen in a white tank top and a red hat with a cigarette pursed between his lips — he's the distillation of a man, like the way a young boy might commit his dad to memory. To that end, "Minari" often feels like it might be David's story most of all. Much like his dad, this ridiculously cute little kid has to assimilate on at least two different fronts.

Born in America and seamlessly bilingual, David lives on Mountain Dew and loves to watch wrestling on TV. He wets his bed and gets into other puckish trouble, but most of the time he tries to keep things even-keeled, if only for the sake of the hole in his heart. But when Monica invites her widowed mother to come live with them, David can feel himself pulled in two directions at once for the first time in his life.

A playful and vulgar old woman with an impish sense of humor, Soonja (Yuh-Jung Youn) is the coolest grandma a kid could ever ask for, but David is reflexively disgusted that she doesn't line up with his Americanized understanding of what a grandma should be. She doesn't bake. She "smells Korean." She's his perfect foil, even if he isn't yet perceptive enough to realize it. The many scenes between these two wonderful characters are warm and wistful in equal measure, as they ricochet from sage wisdom to the kind of hilarious gross-out humor that wouldn't be out of place in a Farrelly brothers movie. Youn is nothing short of extraordinary in the role; from the start she personifies the elegant way that Chung keeps "Minari" suspended between naturalism and melodrama, and towards the end she triggers an incendiary climax that forges the Yi family's entire future in a single moment of truth.

From the opening notes of Emile Mosseri's ethereal piano score to the way that Monica keeps tugging Jacob back to reality, Chung's immaculate memory play is always poignantly in flux between shared recollections of the past and conflicting visions of the future. This beautiful film posits family as the ultimate journey, only to explore how difficult it can be to agree on a destination. Is Jacob trying to prove what's possible for himself, or is he doing his best to build something for the next generation? Is there any way those two goals might be able to overlap before Monica has to pull the ripcord?

If the finale registers as uncharacteristically intense for a movie that otherwise trades in quiet observations and expressive grace notes — a hole in the clouds at the end of a brutal stretch of farming; the Yi family arranging themselves across the trailer in a single wide shot that makes it feel like a home — "Minari" is held together by how it always feels like a daydream.

At one point, eager for David to stop wetting his bed, Monica gives her son some advice. She tells him that the next time he goes to pee, he should stand at the toilet, pull open his cheeks, and ask himself: "Is this a dream? Is this a dream?" We can only assume that David will outgrow that damp tendency one day, and yet — by the end of this unforgettable movie — dreams and reality have seldom been more indistinguishable from each other. Through Chung's eyes, that's precisely what makes them both seem possible.

"Minari" premiered at the 2020 Sundance Film Festival in the U.S. Dramatic Competition. A24 will release it in theaters later this year.