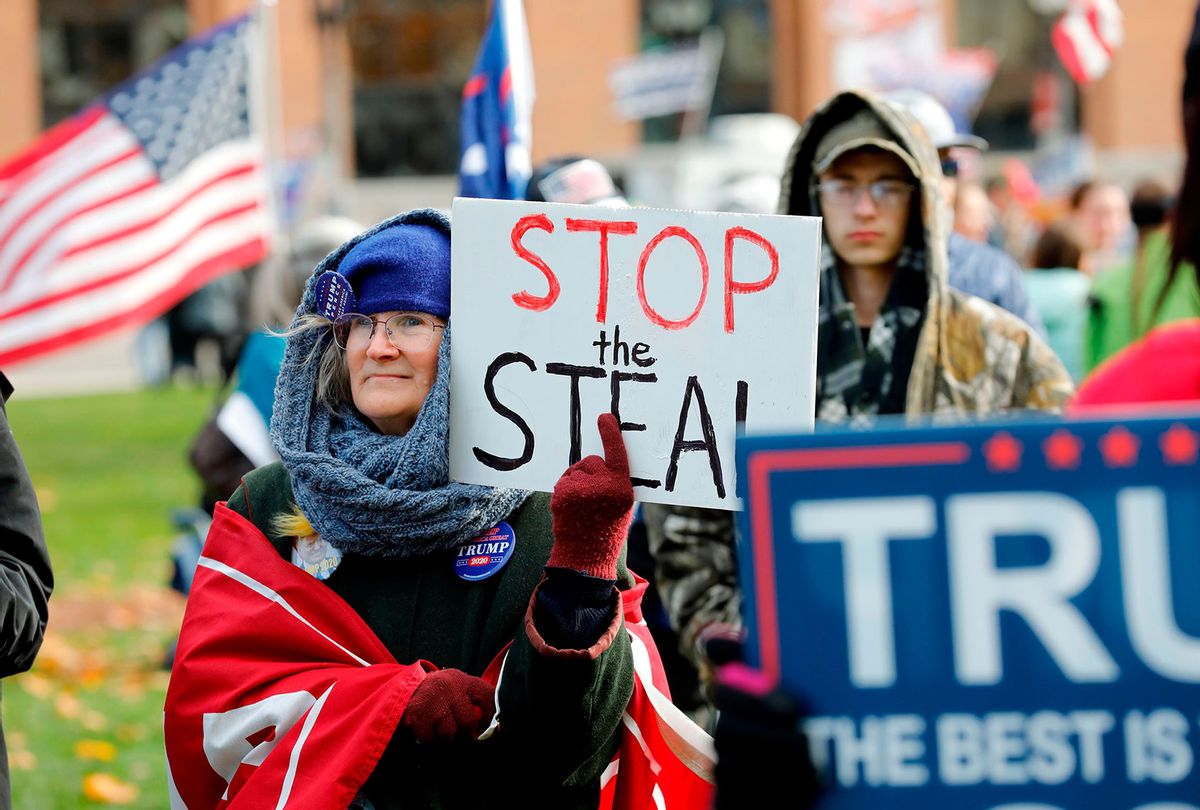 HOUSTON — A former Houston police captain was arrested after allegedly running a man off the road and threatening him at gunpoint — what prosecutors say was part of an elaborate attempt to find evidence for a false conspiracy theory of widespread voter fraud in Harris County.

Mark Aguirre was working on behalf of a powerful Republican megadonor's group to investigate unsubstantiated claims of widespread voter fraud when, in October, he allegedly pulled a gun on a man described by the Harris County district attorney's office as an "innocent and ordinary" air conditioner repairman.

Aguirre was arrested Tuesday, according to the Harris County district attorney's office.

Prosecutors say Aguirre's election fraud claims were baseless and that he was paid $266,400 by the group Liberty Center for God and Country, whose CEO is prominent Texas right-wing activist Steven Hotze.

Hotze was among a group of Republicans who unsuccessfully sued to have nearly 127,000 Harris County ballots tossed out this year. He was also among Republicans who tried — and failed — to stop Gov. Greg Abbott from extending early voting during the coronavirus pandemic, a suit for which Aguirre had provided an affidavit, stating that he was involved in an investigation into a "wide-ranging and fraudulent ballot harvesting scheme" in Harris County.

Jared Woodfill, a spokesperson and attorney for Hotze, confirmed that the Liberty Center hired a company led by Aguirre to investigate voter fraud ahead of the 2020 election. The company contracted approximately 20 private investigators to work on claims of fraudulent ballots in Harris County and other places in Texas. Woodfill said he was aware of Aguirre's arrest but had not yet heard Aguirre's side of the story.

"[Hotze] did not direct or lead any of the investigations," Woodfill said, noting that Hotze instead sent tips and information to the team of investigators to decide how to follow up. "The [Liberty Center] employed the investigation team that looked into the allegations."

Hotze is an active GOP donor and is one of the most prolific culture warriors on the right. He's a fierce opponent of same-sex marriage and was a key figure in the unsuccessful push for the 2017 "bathroom bill" in the Texas Legislature. This summer, he infamously left a voicemail for Abbott's chief of staff telling him to shoot and kill people protesting the in-custody death of George Floyd.

President Donald Trump, along with the Texas GOP and some key Texas officials, has been pushing thus-far unproven claims of widespread voter fraud both before and after President-elect Joe Biden won the presidential election. Trump recently latched on to Texas Attorney General Ken Paxton's failed lawsuit to challenge 2020 election results in four key battleground states. The Electoral College affirmed that Biden won, but 34 of Texas' 38 electors defiantly urged the legislatures of four swing states to overrule the will of their voters and appoint their own electors. And a large number of GOP members of the Texas congressional delegation still have not acknowledged Biden's victory.

While working on behalf of Hotze's group, which has been attempting to find evidence for the GOP's allegations of election fraud, Aguirre surveilled the air conditioner technician for four days with the help of at least two other unidentified people before the Oct. 19 incident. He later told authorities that he believed the technician was behind a huge voter fraud scheme in the Houston area, according to an affidavit by the Houston police officer who responded to the incident. Aguirre told police that he believed the technician to be transporting fake ballots in his vehicle and to have as many as 750,000 in his possession.

"There were no ballots in the truck," according to a Harris County district attorney's office press release. "It was filled with air conditioning parts and tools."

According to the Houston Chronicle, Aguirre was fired from his job as Houston police captain in 2003 after a controversial raid at a Houston Kmart parking lot.

After the October altercation with the technician, Aguirre also told authorities that he and other unidentified suspects had set up a "command post" at a Marriott hotel in Pearland for days ahead of the incident. He refused to identify the other people he worked with, according to the Houston police report.

Aguirre ran his black SUV into the back of the technician's truck to get the man to stop and get out, according to a court document describing probable cause for the charge of aggravated assault with a deadly weapon. He pointed a handgun at the technician and forced him to the ground, according to the affidavit. One of the other people Aguirre was with allegedly stole the technician's vehicle after searching it; police later found the abandoned truck a few blocks away.

A few days before Aguirre allegedly assaulted the man, he called Lt. Wayne Rubio with the Texas attorney general's office, requesting help with the investigation. Rubio declined and reported the call. Days later, he got another call from Aguirre, who was upset that police would not intervene based on his uncorroborated accusations, according to the affidavit, which referred to a phone call and email from Rubio reporting the call to authorities. Aguirre allegedly told Rubio he had been in a car wreck with "a voter fraud suspect."

"We are lucky no one was killed," Harris County District Attorney Kim Ogg said in a statement. "His alleged investigation was backward from the start — first alleging a crime had occurred and then trying to prove it happened."

Aguirre was arrested by Houston police Tuesday and charged with aggravated assault with a deadly weapon, a second-degree felony punishable by up to 20 years in prison.