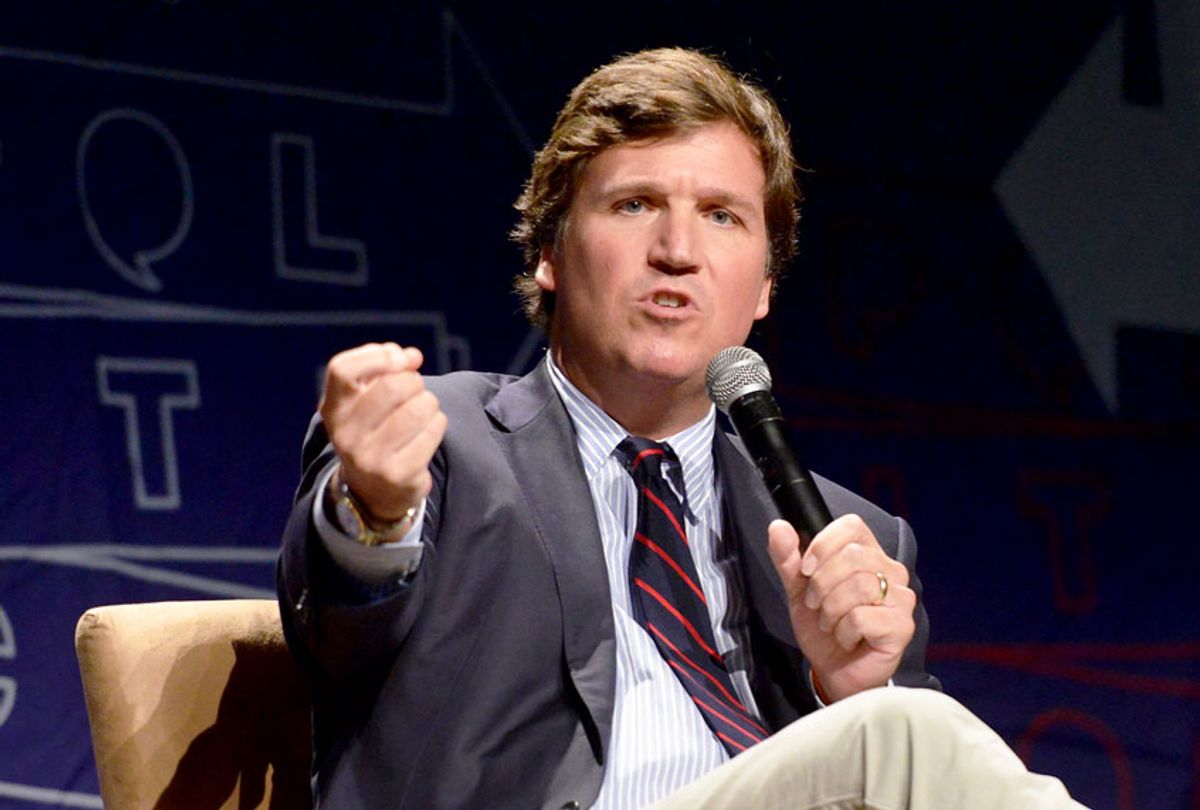 Fox News personality Tucker Carlson, who network attorneys recently convinced a federal judge is not expected to make factual claims, told his viewers to be "nervous" that the new coronavirus vaccine was a form of social control and dismissed efforts to promote the long-awaited drug as "false" and "too slick."

Carlson, who broadcasts his top-rated program from a garage in Maine while Fox News keeps on-air talent out of studio, compared the "glitzy" media coverage of the first inoculations to "a corporate image campaign" for "Hollywood blockbusters or the new iPhone."

"Suddenly the COVID vaccine is on the morning shows, it's being touted on celebrity Twitter accounts, and the news about it is uniformly glowing," he said, adding derisively: "This stuff is just great. A lot of famous people say so. Just the other day, the guy who played Gandalf in The Lord of the Rings series got the vaccine. As on any media tour, the paparazzi were there for the dramatic moment when they stuck the needle in his arm."

Carlson contrasted the enthusiasm to news that a health care worker in Alaska recently endured a severe allergic reaction to Pfizer's vaccine, casting an Orwellian shadow over the reports.

"It was all a fantastic experience, according to doctors who treated her," Carlson said before quoting one of the woman's doctors from a CNN article: "'During the whole time, she was still enthusiastic she got the vaccine and the benefits it would give her in the future.'"

"What a cheerful patient she must be," Carlson scoffed, before turning conspiratorial. "We've got to assume she is, in any case, because we can't really know. The authorities did not release her name. All we know is she is a highly satisfied customer. Yet another."

Carlson, speaking as health officials reported the most deadly day of the pandemic in the U.S., told viewers that they should be "nervous" about the vaccine because these promotional efforts were "false."

"So, how are the rest of us supposed to respond to a marketing campaign like this? Well, nervously," he said. "Even if you are strongly supportive of vaccines, and we are, even if you recognize how many millions of lives have been saved over the past 50 years by vaccine, and we do, it all seems a bit much, it feels false, because it is, it's too slick."

The heir to the Swanson's frozen dinner empire demanded that public figures "stop with the slogans," before comparing the vaccine to abortions.

"In this country, we control our own bodies. They're always telling us that. But no. Suddenly, the rules have changed," he said. "On the question of the corona vaccine, our leaders are definitely not pro-choice. Their view is do what you're told, and don't complain, and no uncomfortable questions. Those aren't just suggestions, they're rules and Silicon Valley claims to enforce them."

Carlson then turned to complain about Twitter and allege that the government would use the vaccine as a form of social control.

"Among other things, Twitter is censoring any claim that this vaccine might be used to quote, 'control populations.' So, whatever you do, don't say this is social control, because if you do, the richest and most powerful people in the world will act in perfect coordination to shut you down immediately," he said.

"So, to repeat, there is no social control going on here — none. And if you suggest otherwise, Twitter's social controls will censor you," the host groused.

From there, Carlson leapt to accuse Bill and Melinda Gates, who for months have been implicated in baseless conspiracy theories about vaccines.

"Why is she weighing in on an international health emergency?" Carlson wondered about Gates, who leads the world's largest private charity organization.

"Melinda Gates is married to a billionaire," Carlson explained, adding that "in 2020 that's enough to give you control over an entire country."

"So [Melinda Gates] is demanding the tech companies censor anyone who contradicts the official storyline on the COVID vaccine, and she is getting her wish," he said. "None of this inspires confidence. Censorship will not convince a single person to take the coronavirus vaccine. In fact, it will have the opposite effect."

The day before Carlson's rant, Fox News owner Rupert Murdoch, 89, received the COVID-19 vaccine in England after being notified he was eligible.