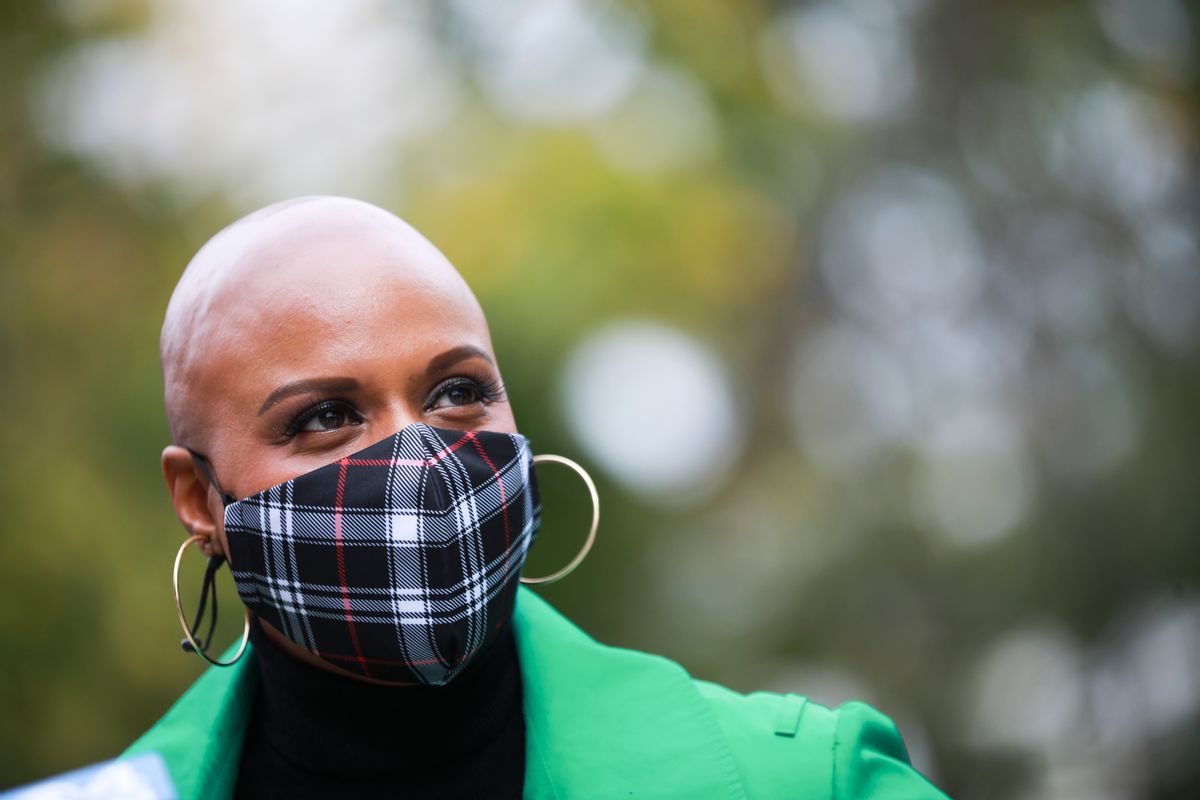 Rep. Ayanna Pressley, D-Mass., speaks to the press after casting her early ballot on Oct. 24, 2020, at the John A. Shelburne Community Center in Boston. (Nicolaus Czarnecki/MediaNews Group/Boston Herald via Getty Images)
--

More than 40 Democratic lawmakers joined Rep. Ayanna Pressley late Tuesday in calling on President-elect Joe Biden to immediately abolish the federal death penalty upon taking office next month, bringing an end to a period of six months in which President Donald Trump has overseen more federal executions of people "than the total number executed over the previous six decades."

Biden is opposed to capital punishment and has pledged to abolish its use at the federal level. In Pressley's letter, the lawmaker emphasizes that Biden must make the policy change a top priority after January 20, when he will take office.

"With a stroke of your pen, you can stop all federal executions, prohibit United States Attorneys from seeking the death penalty, dismantle death row at [Federal Correctional Complex] Terre Haute, and call for the resentencing of people who are currently sentenced to death," Pressley wrote.

The president is in the midst of what The Guardian called an "execution spree," having killed three people — Orlando Hall, Brandon Bernard, and Alfred Bourgeois — since losing the presidential election on November 3. Before Biden takes office, Trump is planning to put to death inmates Lisa Montgomery, Corey Johnson, and Dustin Higgs.

Trump is the first president to carry out the death penalty during a lame-duck session since 1889, when President Grover Cleveland executed a Native American named Richard Smith.

Pressley sent the letter to Biden as the Death Penalty Information Center (DPIC) released a year-end report showing that Trump has killed more people in 2020 than all states that have carried out executions, combined — an unprecedented use of the death penalty by the federal government.

Seven state executions were carried out in Alabama, Georgia, Missouri, Tennessee, and Texas this year, while the president has killed 10 people since July, when he resumed the use of the federal death penalty after 17 years.

"The sheer number of executions set the Trump administration apart as an outlier in the use of capital punishment, compared both to the historical practices of American presidencies and the contemporary practices of the states in the Union," the DPIC wrote. "In addition, the details of the cases and the highly politicized manner in which they were carried out revealed significant problems in the application of the federal death penalty."

The people Trump has put to death and plans to execute before his term is over — five Black men and one white woman — have been the subject of calls by global human rights advocates, prosecutors, and former jurors who have pleaded with the administration for clemency.

Montgomery is the survivor of lifelong sexual and physical abuse and was experiencing psychosis, according to her lawyers, when she commited a murder in 2004. Bernard was 18 when he was involved in a kidnapping and killing of a couple in Texas, did not fire the gun that killed the victims, and has shown remorse for his crime. Bourgeois's lawyers argue that he has a severe intellectual disability.

"Capital punishment is unjust, racist, and defective," Rep. Connolly said in a press release on Tuesday. "The United States stands alone among its peers in executing its own citizens, a barbaric punishment that denies the dignity and humanity of all people and is disproportionately applied to people who are Black, Latinx, and poor. For example, Black people make up less than 13% of the nation's population while accounting for more than 42% of those on death row."

National polls in recent years have seen support for capital punishment fall to record lows; 60% of respondents told Gallup in a survey in October 2019 that they preferred the use of life prison sentences over the death penalty, and a year earlier only 49% of Americans said they believed the death penalty was applied fairly.

"Your historic election with record turnout represents a national mandate to make meaningful progress in reforming our unjust and inhumane criminal legal system," wrote the lawmakers to Biden. "Ending the barbaric practice of government-sanctioned murder is a commonsense step that you can and must take to save lives."