By focusing on the human scale of a crisis, "Greenland" becomes the rare disaster movie that feels realistic 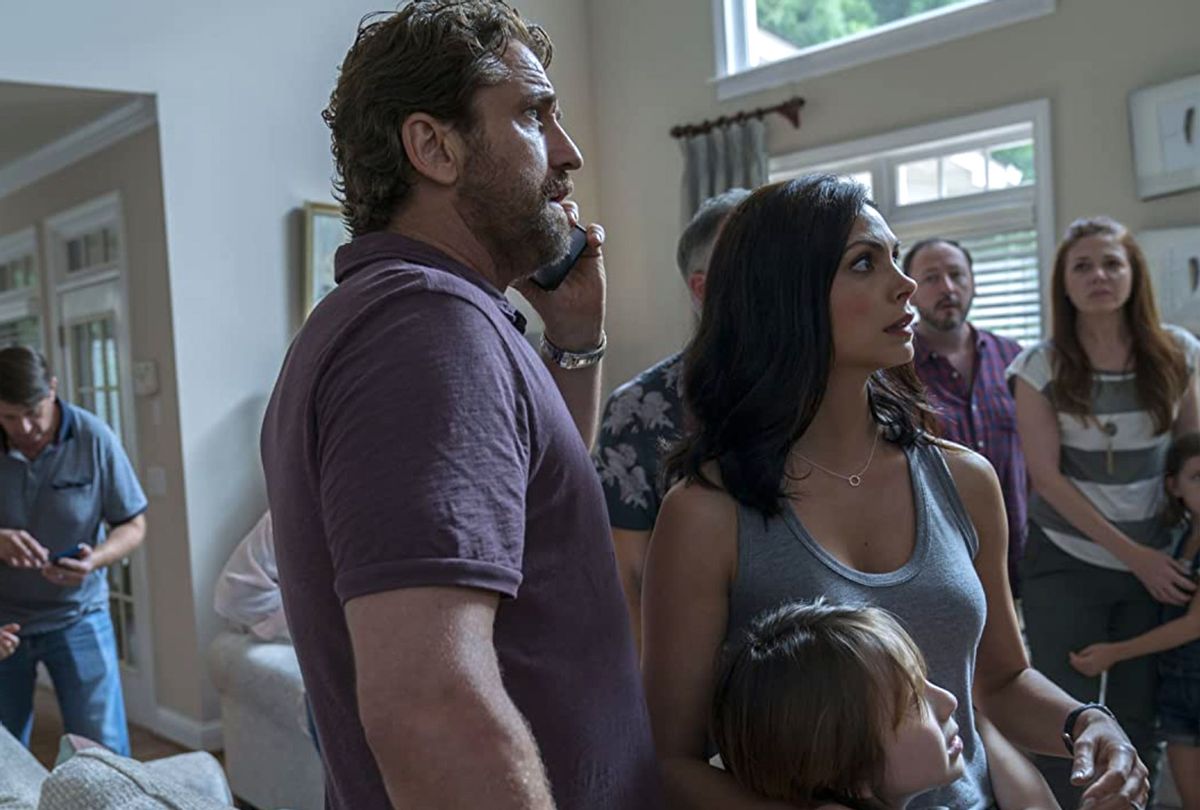 After the hellscape of a year that was 2020, it stands to reason that a disaster movie about a regular guy and his family trying to stay alive as the world goes to shit around them would feel redundant and/or too close to home. Either way, it seems like something that wouldn't be worth paying for when you can get the real thing for free by looking at your window, turning on the TV, or — and this one is extra fun — just thinking about literally any single aspect of your life as it's been since March.

And yet it's precisely because Ric Roman Waugh's mid-budget "Greenland" eschews Hollywood expectations of its "craggy man vs. a planet-destroying comet" premise and drills in on that human-sized helplessness we've all come to know so well that its most effective moments remind us why these movies ever resonated with people in the first place. The universe is a cold and indifferent place where inanimate objects will travel hundreds of thousands of lightyears across the stars just to kill you and everyone you love, but the pathetic smallness of our mortal existence — the silly lives we lead and the people we're lucky enough to share them with — is precisely what makes them so precious. Maybe that sentiment is too facile to put into words, but it's just facile enough to build a satisfyingly bone-stupid Gerard Butler vehicle around.

Butler stars as John Garrity, a Scottish-born structural engineer so ordinary that "everyman" feels a little too edgy a term to describe him. If his marriage to Allison (the ever-appealing Morena Baccarin) were one of the skyscrapers he built, it might not be falling apart. We don't learn the reason behind their recent separation until toward the end of the film, but it comes as a shock when we do; not because the reveal itself is surprising, but rather because "Greenland" is so light on character detail that you almost can't believe that it doubles back to fill in that blank. All you really need to know about the Garritys is that the growing distance between them is still bridged by their mutual love for their diabetic seven-year-old son Nathan (Roger Floyd), whose regular need for insulin — to the great shock of anyone who's never seen a movie before — will very much come up again. (Among other things, "Greenland" is a nail-biter for anyone who's ever worried about how they'd fare without their respective crutches during an emergency.)

The other thing about Nathan is that he's super-obsessed with the comet that's speeding towards Earth. He talks about the interstellar object — dubbed "Clark" — so familiarly that it sounds like his best friend. Maybe it is, the poor kid. He loves Clark. Alas, Clark does not love him back. Clark zapped into Earth's neighborhood from an unknown solar system in a way that caught NASA flat-footed (and might inspire you to wonder if something more sinister is afoot), and it has no intention of politely burning up in our atmosphere or sinking into the ocean as scientists predict that it will. Please forgive the polling error, but it turns out that Clark is composed of fragments big enough to kill millions of people with each strike, and one particularly hefty chunk — set to make landfall some 48 hours after first impact — will cause what "Deep Impact" fans know as an E.L.E., or extinction-level-event. There's no stopping it. Robert Duvall is too old to go up there and nuke it from the inside out, and NASA spent too much on Space Force to afford Bruce Willis' daily rate of one million dollars. The horrifying scene where the Garritys and their neighborhood friends gather around the TV and watch a piece of the comet decimate Tampa confirms what we already feared: Clark kind of sucks.

The only sliver of hope — the only thing that stops "Greenland" from essentially becoming a Barstool-friendly "Melancholia" remake — is the special alert that John gets on his phone. Due to his expertise as an engineer, he and his family have been selected to join other valuable people from around the world in an underground bunker where they might survive the devastation to come. And where is that bunker? Well, our lives would be a lot easier if we knew what the movie about us was called. But hitching a government-operated ride to Greenland won't be as easy as it sounds, especially once panic sets in and the general public gets wind of the plan.

So begins a resourceful disaster movie that maintains its lock on the intimate anxieties that underwrite our collective fear of city-sized asteroids, underground volcanoes, and Cloverfield monsters — mostly because Waugh can't afford to divert his attention to the destruction itself. Shot on a shoestring budget relative to the rest of its genre, "Greenland" is able to leverage a blood-red aurora borealis, a handful of fireballs, and a few distant glimpses of space rocks blazing a trail through the night sky into a convincing portrait of a planetary death rattle. Things grow a bit squidgy whenever Waugh goes in for the money shots, but his eyes are seldom bigger than his wallet in a film that mines little suspense from the Garritys' far-fetched race to safety, and a lot from their scramble to reunite whenever they get separated.

If Waugh lacks the vision and/or resources to compete with something like Steven Spielberg's "War of the Worlds," the granular focus of Chris Sparling's script encourages the director to seize on the moments that are too small for other, more spectacle-oriented disaster movies to accommodate. Show audiences an alien spaceship demolishing the White House and they might lose interest in the chain of command that's involved in denying a diabetic child access to a military plane, but keep the action on the ground level and the life-or-death stakes of a desperate evacuation come to the fore.

That "Greenland" is able to keep things on a human level for almost the entire duration of its runtime is also made possible by the film's quiet insistence on the kindness of strangers and the insidiousness that's made possible by our own self-interest. En masse, the terrified hordes that John and his family encounter are as scary as the comet that's whipped them into a frenzy, but most of them soften when faced with personal responsibility; the rest are forced into such immediate confrontation with the inhumanity of their actions that only the most desperate of the lot can see them through. One sequence involving Hope Davis and David Denman as a couple who offer Allison and Nathan help is particularly sickening for how it maps a Good Samaritan gone bad.

None of this stuff is rendered with the rigor or curiosity required to elevate "Greenland" too far above the Redbox expectations of its genre; the movie only gets dopier as it makes its way north, and some of the clumsier lines of dialogue underscore the moments in which the filmmakers' lost faith in the story they were telling (upon learning that comet shards are heading for upstate New York, Allison turns to camera and asks "Isn't that where we are!?"). But if none of the film's main characters ever become more than stand-ins for the feelings they're meant to evoke from us, the unflinching conviction with which "Greenland" commits to those feelings is enough to make it more harrowing than hokey, and more honest than it is far-fetched. At the end of a year full of awful surprises, a twist this inane almost qualifies as a legitimate silver lining: The creative team behind "Angel Has Fallen," of all people, have inadvertently made only the second mainstream film of 2020 that captures what it felt like to live through it, and the first that doesn't climax with Rudy Giuliani's penis.

STX Films will release "Greenland" on VOD on Friday, December 18.