My American dreams and nightmares: On Mississippi streets, "Native Son" and Jeezy vs. Gucci Mane

Tensions between keeping it street and enlightenment run deep. Prison woke me up 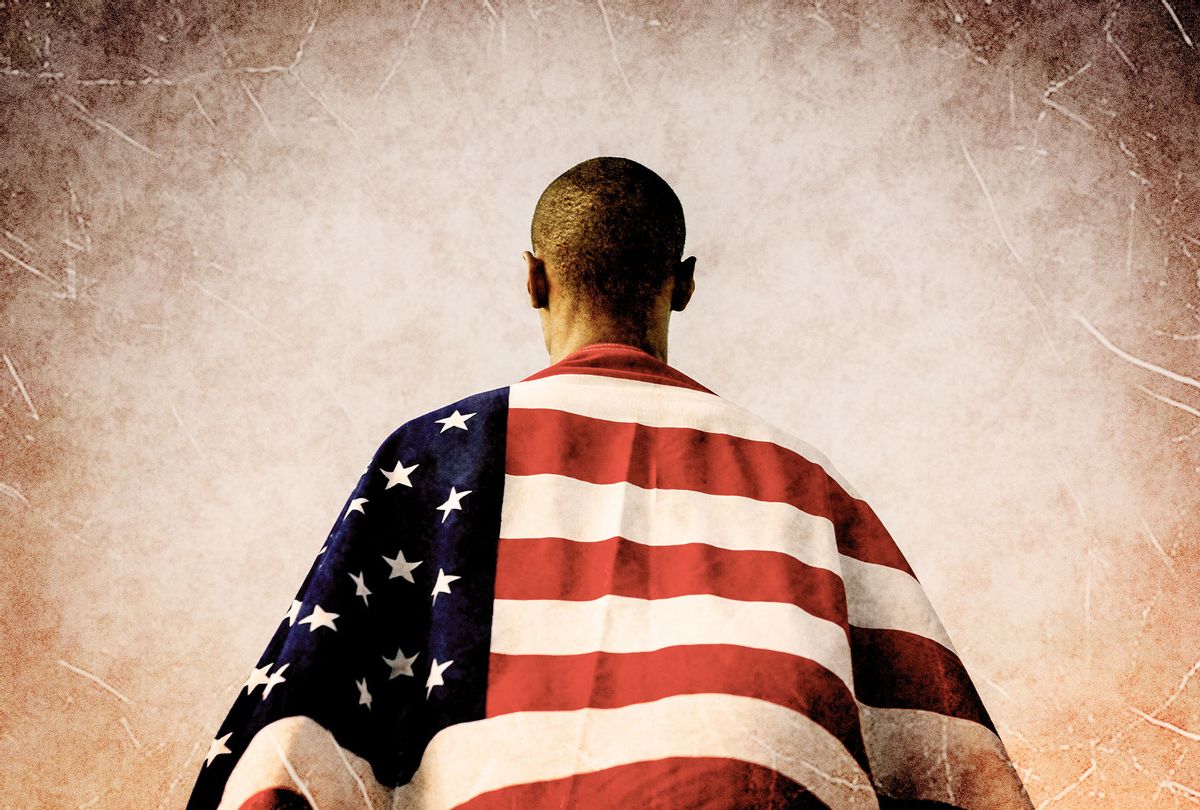 Big Cripp stood 6'2" with a dark caramel complexion, gangsta under his fingernails, and always strapped with the respect that comes from knocking n***as out, doing a murder bid, and surviving a murder attempt on his life. Cripp, who is also my cousin, sewed me into the fabric of a well-knitted crew, the All-Fam Team. Not only was I moving with a strong unit, but I finally had a plug that moved bricks of cocaine — as Nas said, this is a drug dealer's destiny.

It was a few minutes after 8 a.m. in Jasper County, Mississippi. The sun was still rising, sitting just at the crowns of the oak, pecan and willow trees that populated the woods. The All-Fam Team lingered outside of Uncle's home, a tidy white structure with brown trim. Uncle was "up the road" dropping off his baby daughter at a neighbor's house. There were eight of us — a motley crew of blood brothers and cousins, and brothers through loyalty. The grass that we used as a driveway was more dirt than pasture. While waiting for Uncle to pull up, we leaned or sat on the hood of our cars, or sat on the driver's seat with the door open, sitting sideways in the seat so our knees hung outside of the car. I was the youngest and newest member of the All-Fam Team, so I was reserved, listening for jewelry and hushed guidance from my drug-dealing mentors.

I especially looked up to Yellow Boy. We were all independent and rebelled against the promises attached to general labor in the formal economy. There's nothing wrong with making a living from general labor. In my opinion, working-class people are the real heroes of America. But we aspired to achieve a different type of agency than the freedom, or lack thereof, offered by working at one of the chicken plants in Jones and Jasper counties. I was attracted to Yellow Boy's organic intellectualism. His individuality came naturally, and his thoughts were original. He didn't follow trends, yet he was always freshly dressed. He greeted the world with curious suspicion, honestly questioning everything. And he was always interested in the books that I was reading.

Inside Uncle's house, which is not much bigger than a kitchenette, I was shook. Two kilos of cocaine sat on the kitchen counter. This was my first time seeing bricks of white girl. I was fully aware that kilos of coke came with heavy package deals. Along with the two bricks, garbage bags of marijuana lined the kitchen wall. There were a couple of Pyrex bowls and boxes of baking soda. I kept thinking to myself: If the Feds come here right now, we're going away for a long time.

While the chef ice water-whipped cocaine into crack, we bounced around theories centered on hip-hop lyrics, songs and our favorite MCs. We discussed the current fashion trends, sneakers, basketball, and the latest street gossip. On the surface — based on our conversations and illegal activities — we colored in the stereotypical views of Black men that ran the gamut of America's media outlets as well as the minds of white suburbia. Some may say that these topics are not intellectually challenging. For one, they don't have to be; and two, it was through these theorizing sessions where I gained a deeper glimpse into the minds of the men that I admired. These crack-cooking sessions also gave me a peek into what these guys did when they were ducked off from the flash of street cameras.

Recently, rappers Jeezy and Gucci Mane squared-up with their musical catalogs during a Verzuz battle. With nearly 2 millions viewers, the Atlanta rappers finally put a lid on a fifteen-year feud that left Jeezy's friend, Pookie Loc, dead. But the most striking is Jeezy's maturity. The now-slimmer "Trap or Die" rapper is slowly revealing that he finally understands that The Street is a myth created by power structures and is also one of America's most profitable folk tales.

The creation of The Street is a tag-team effort between local, private, federal, and state power structures to confine cultural and physical Blackness. When juxtaposed to the construction of white suburbia, Black physical spaces, which have been legally excluded from homeownership and wealth, have become alienated from national belonging. And within these respective spaces, ideals about Blackness become inscribed on the minds of both Blacks and whites, and tossed into The Street or urban categories.

Outside of the tag-team efforts between government agencies, marketing has also been an effective tool used in sustaining The Street fable. Ironically, Ebony magazine played a major role in tying Blacks to The Street narrative. At the height of Ebony, 75 percent of its pages consisted of advertising. White advertising companies marketed food, clothing, cosmetics and other forms of entertainment to Black publications, whereas white consumers were marketed home goods and luxury products, as well as encouraged to invest in homeownership, which is tied to the American Dream narrative.

Many of us, whether consciously or unconsciously, have subscribed to these subtle ideals, as we saw during the Jeezy vs. Gucci battle. During the Verzuz battle, Gucci bragged about his jewelry and outfit, topics that the All-Fam Team always ran over. "I want y'all to praise my outfit," Gucci said. "It cost 10 bands. Look at my opponent! Look at my opponent!"

Jeezy replied, "I didn't know this was a fashion show," before mentioning that he owns massive amounts of real estate in Atlanta. Here, with land and homeownership, Jeezy places himself outside of The Street narrative. Since the slave era, owning property has been the demarcation for American and The Other.

After Gucci performed the Jeezy diss "Truth," Jeezy took a moment to explain why he invited Gucci to take T.I.'s place in the Verzuz battle. "I tell you what though—when I called you and extended this invite to you, my n***a, I did it as a real man," Jeezy said. "It's been 20 motherf**kin' years." Gucci corrected him that their feud had been going for 15 years. "OK, well however many, you're still talkin' the same shit."

The two interrupted each other repeatedly. "I told you straight off the dribble, n***a, we can't do nothin' if it ain't street," Gucci said. "If I can't perform the truth we ain't doin' it." Jeezy assured him it was "all good."

"When I said I wanted to do this shit for the culture, that's what I wanted to do, n***a," he continued. "I wanted to show you that the world care about what the f**k we got going on, because we are the culture, you feel me. Me, and you, where we come from, what we been through, n***a. Us. Me and you. All these kids out here doing what the f**k they do because they saw what went on with us, dawg."

The exchange between keeping it street and enlightenment was also displayed in Richard Wright's "Native Son." Bigger Thomas, the book's main character, grew upset, and cussed his friend Gus for allegedly being afraid to rob a white man, when in actuality, Bigger was afraid. Bigger was hoping that Gus would back out, so he'd have a reason to not go through with the planned robbery, but Gus was thinking about it, and that made Bigger afraid. Instead of de-characterizing, and admitting that he was afraid, Bigger stayed in The Street character, and acted out his fears with violence against his friend. When confronted with internal struggle, both Gucci and Bigger tapped into what they learned in The Street, boasting about fashion or inviting violence. These are perfect examples of how The Street narrative controls our behavior.

The moon cast a dim light inside of the '85 box Chevy. I was sitting shotgun. Big Cripp blew loud, and maneuvered the four tires on the box like the footwork of a young Floyd Mayweather. The moonlight bounced off Cripp's battlescar-covered face, which was in full view, because his royal blue L.A. Dodgers fitted was turned to the back, and slightly tilted to the left. It was 3 a.m. in Laurel, Mississippi, me and Big Cripp were wide awake, driving through the city making crack sales.

"Cuz, I know these n***as think that I'm gonna be out here selling dope forever," Cripp said between pulls of his blunt. When Cripp was high, he'd reveal his most inner self, stuff that we rarely talked about while in The Street character. "But I'm not. I be thinking about what my life will be like when I stop selling dope."

I was taken aback, amazed, and inspired all at once. Up until then, I never gave thought to my future. I never truly saw myself making a living outside of the 'hood. However, for as long as I could remember I had wanted to enroll in college and become a writer. But my mind was inundated with life inside of my confined neighborhood. I thought you had to be smart and come from a middle-class family to attend college. Becoming an educated writer was the stupidest shit I could make myself believe, or so I thought. So, I kept my writing dreams to myself.

Days turned into weeks, and weeks turned into months as I continued pondering my future.  Meanwhile, Yellow Boy and All-Fam Team member Snow opened corner stores, and Red Man, a fellow team member, opened a sports bar in Gulfport, Mississippi. I felt like a failure. I was finally getting money, but I felt smothered, trapped, and useless. I was going to die in the streets, and this mental discomfort boiled my spirits like I was constantly stepping into a tub of scalding hot bath water. I began having nightmares of being murdered or going to prison. I was so torn on the inside that I wouldn't sleep for days. Even those closest to me started having nightmares about me. My grandmother told me that she had a nightmare that I was in prison.  A woman that I was romantically involved with at the time once called me while I was out of town doing business to tell me that she had a nightmare that someone had murdered me.

I was totally lost. However, for the first time in my life I understood that I was adrift, and sincerely looking for answers.

The guys I looked up to were moving on to legal enterprises. As I was trying to catch up to them on the highway of life, undercover agents spotted me on Mississippi's Interstate 59, where they violently pulled me out of a car before finding more than a half-ounce of heroin, which resulted in a prison sentence at the notorious Mississippi State Penitentiary in Parchman. It was in Parchman's Unit 26 B, D Zone, bed No. 45, where I decided to pursue a career as a writer and historian.

I was lied to and America's false ideological culture of Blackness continues to praise The Street fable.

Big Cripp never did figure out how to change his situation. Today, he's pushing 40 years old, and eking out a living as best as he can.