Apparently it's not Trump's fault he lost. It was all those damn voters! Republicans are looking to fix that 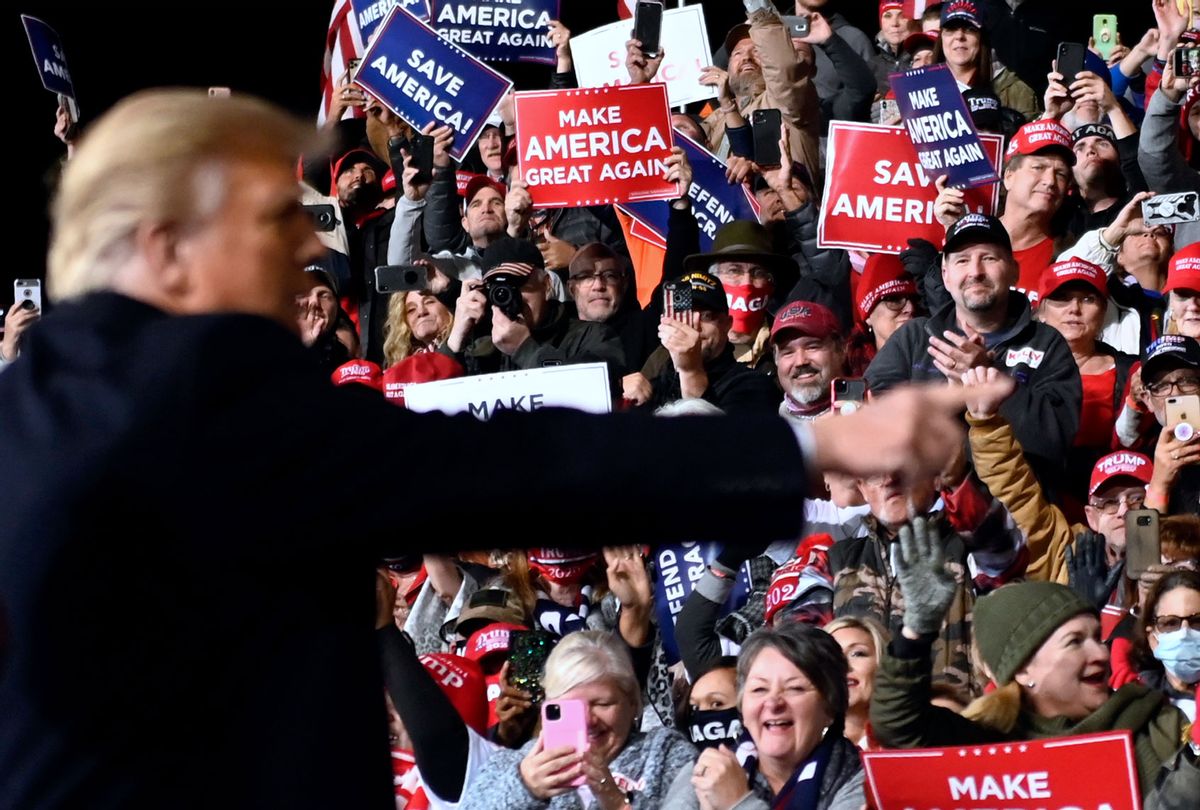 Supporters cheer as US President Donald Trump gestures after speaking during a rally to support Republican Senate candidates at Valdosta Regional Airport in Valdosta, Georgia on December 5, 2020. (ANDREW CABALLERO-REYNOLDS/AFP via Getty Images)
--

Raise your hand if you remember the invasion of Grenada. Anyone? You mean to tell me you don't recall the morning 37 years ago when two battalions of the 75th Rangers, units from the 82nd Airborne Division, Navy Seals and Army Delta Force, along with elements of the Jamaican military and Regional Security System forces of the Eastern Caribbean — something like 7,600 troops altogether — swarmed the tiny island nation of Grenada?

I'm shocked … shocked … so few of you recall that glorious day, because the invasion of Grenada was the only war this country has won since World War II. Not that you'd be expected to see our great victory over Grenada in that way, because of course we didn't exactly lose the war in Vietnam, and we didn't lose the Iraq war, and we haven't yet lost the war in Afghanistan, even as the number of our soldiers there is scheduled to dwindle from 4,500 to 2,000 by Jan.15, and none of the remaining troops are, in fact, fighting.

Indeed, this country has a long history of turning losing into winning, beginning with the South's century long "Lost Cause" revision of the surrender at Appomattox into a noble victory celebrated across the land with the erection of glorious statues honoring the great generals who led the South to its great victory, including within the halls of the U.S. Capitol, the headquarters, if you will, of the very Union they betrayed, against which they fought, which in fact defeated them.

It's almost as if losing wars and turning those losses into victories is what prepared the ground for the way Donald Trump and the Republican Party are currently treating his defeat in the presidential election of 2020. We didn't lose the war in Vietnam! Why, just have a look at the body count! It wasn't Trump who lost the election, the thinking among Republicans goes. It was all those damn illegitimate votes by the other side.

"Mitch, 75,000,000 VOTES, a record for a sitting President (by a lot). Too soon to give up," Trump tweeted on Wednesday after the Senate majority leader finally recognized Joe Biden's victory in a speech on the Senate floor. "Republican Party must finally learn to fight. People are angry!"

This has created a certain amount of, shall we say, cognitive dissonance among Republicans. Politico reported this week that the Republican Party "has ditched election post-mortems. For the final act of his showman-like presidency, Donald Trump has convinced the Republican Party that despite losing the White House by 7 million votes — and despite seeing five states flip in 2020 — things could hardly be better inside the GOP."

Why should you study the reasons you lost an election when you didn't lose? It makes a sick kind of sense, when you think about it. The whole election came down to Donald Trump. Seventy-four million people voted for him. Eighty-one million people voted against him. And that was what it was, in the end. Trump was the issue, and if you're not going to get rid of Trump and what he stands for — if, in fact, you're going to remake an entire political party in his image and dedicate it to him — then why analyze anything at all? They already know the answer: It wasn't Trump's fault. It was the fault of the election itself.

"It wasn't a matter of our candidate," Bill Pozzi, chair of the Republican Party in heavily Republican Victoria County, Texas, told Politico. "It was a matter of the process."

In other words, too many damn people voted. Republicans aren't worried about why women voted against them in the suburbs, or why they lost the votes of young people by record-breaking margins, or even why their support among the elderly, long a bulwark of the party, eroded. They are preparing to turn Trump's endless whining about voter fraud and stolen votes and Hugo Chavez's supposed Dominion voting machines into a campaign to turn back the clock to the years of Jim Crow. If you want to control the results at the ballot box, then you've got to control who gets to drop the ballots in the box. Fifty years of scamming, by way of the "Southern strategy," has taught them that much.

Kentucky Sen. Rand Paul said it out loud when he told Fox Business host Maria Bartiromo, "I'm very, very concerned that if you solicit votes from typically non-voters, that you will affect and change the outcome. So I'm very worried Democrats will control all three branches of the government and really truly transform America, but not for the better."

Bingo, Rand! Come on down and pick up your big prize!

Seemingly in answer to Paul's "concerns," Republicans have filed three lawsuits in Georgia, two in federal court and one in state court, seeking to make it more difficult to vote by mail ahead of the runoff election in January for the two Senate seats currently held by Republicans David Perdue and Kelly Loeffler. Georgia is one of two traditionally Republican states — the other is Arizona — that Biden narrowly won in this year's election. Republicans are understandably worried that the same thing will happen to Perdue and Loeffler that happened to Trump in November. They'll lose.

Judges in Georgia threw out the two federal lawsuits this week. One challenged Georgia's signature verification process on absentee ballots, and the other sought to block the use of drop-boxes for returning absentee ballots. The state lawsuit also wants to restrict the use of drop-boxes and seeks to change the rules for election observers. A hearing on that suit is scheduled for Christmas Eve.

Republicans in other states where they control state legislatures are also planning on tightening the rules regarding absentee ballots. Republican legislators in North Carolina, Alaska and Pennsylvania have already announced they will introduce bills intended to reduce absentee voting. Michael Whatley, chair of the North Carolina Republican Party, told Politico, "I think nationally there's going to be a huge focus on absentee voting and election integrity. There has to be a significant tightening of the rules around absentee balloting, and we need to have that conversation with state legislatures all around the country."

It all comes down to who gets to vote and how you count their votes. That's why Republicans were so happy with Shelby County v. Holder, the 2013 Supreme Court decision that made it easier for states to impose voter ID laws, purge voter lists and restrict the number of polling places, all rules that disproportionately affected Democratic voters. That's why they're trying, in both courts and state legislatures, to limit absentee voting with petty rules about applications and signatures and witnesses and what kind of envelopes you mail your ballot in.

Republicans want elections to be like wars where they get to use guns and bullets, but Democrats don't. That's why you haven't heard a single one of them denounce the death threats against governors and election officials who refuse to go along with their attempts to reverse the results of elections in Georgia and Michigan and Pennsylvania. They don't care how they win. They'll be happy to "win" the same way we "won" in Vietnam, Iraq and Afghanistan: with alternative facts. This ain't the invasion of Grenada, folks. We're in a war for democracy itself.