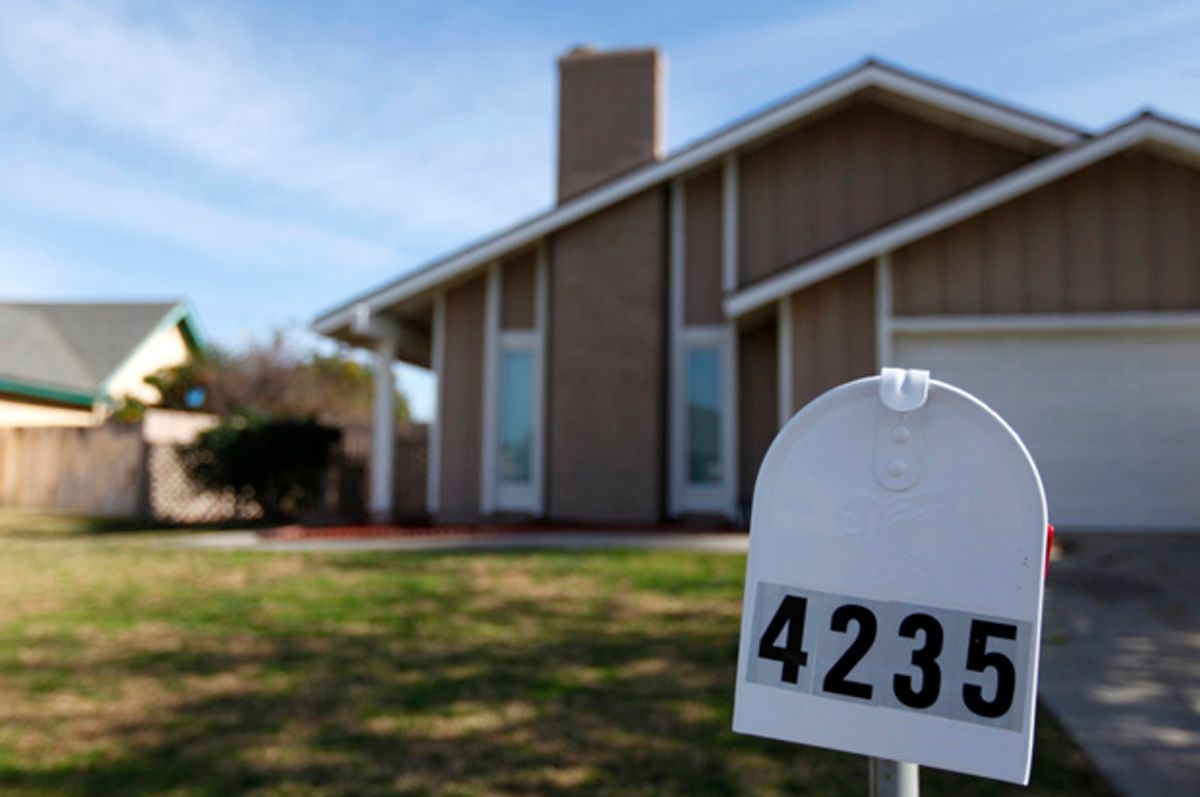 A rental home owned by Blackstone is shown in Riverside, California (Reuters/Mike Blake)
--

As the December 31 expiration date on the CDC's federal eviction moratorium nears in the midst of the surging Covid-19 pandemic and freezing weather, an estimated 30 to 40 million working-class households in the United States are bracing for the possibility of eviction — but at least one Wall Street investor looking to capitalize on the crisis is bragging about what he sees as a golden opportunity to expand his real estate empire.

"You always have winners and losers — Blackstone was a huge winner coming out of the global financial crisis, and I think something similar is going to happen," said the billionaire CEO Stephen Schwarzman.

After recounting how Blackstone profited in the wake of the 2008 financial crash by gobbling up tens of thousands of foreclosed homes for pennies on the dollar and converting them into reportedly substandard rental properties — and intensifying the affordable housing crisis by funding campaigns against rent control even after receiving public subsidies—Schwarzman "indicated his firm is positioning itself for a similar jackpot," wrote Sirota and Perez.

While Schwarzman alluded to the future when discussing the potential to make a killing from the worsening economic crisis, "his firm is generating big revenues today," the pair continued.

"We're the largest owner of real estate in the private world," said Schwarzman. "And that asset class has boomed with huge increases in rents." He added that much of Blackstone's rental income comes from commercial real estate, especially the logistics sector, with warehouse space accounting for over one-third of the property owned by the investment firm.

As Sirota and Perez explained, "that gives Blackstone enormous power to jack up rents and potentially bankrupt pandemic-battered small businesses."

The pair warned of "a cautionary tale" from Britain, where Blackstone has become "small businesses' largest landlord—and the company has been accused of jeopardizing the viability of those businesses by refusing to waive rent when they were forced to shut down during the pandemic."

Given that there are "congressional proposals to use government money to bail out the commercial real estate industry," the private equity firm could benefit even further.

But that doesn't mean Blackstone is no longer involved in the residential real estate industry. Despite "selling off its single-family residential rental business" in November 2019, Sirota and Perez reported that the financial giant has since ventured into apartment buildings and mobile homes, in addition to making an August return to the suburban housing market.

"If you would have asked me in April whether anything like this would have been possible, you'd have to say no," Schwarzman told his Wall Street colleagues last week.

Assuming Blackstone does "buy up even more residential real estate to try to squeeze even more revenue out of renters in the pandemic-ravaged economy," as Sirota and Perez put it, working people across the country will pay a hefty price—with both their pocketbooks and health taking a hit.

As Common Dreams reported in October, corporate landlords, including Blackstone subsidiary Invitation Homes, have been among the worst offenders when it comes to evicting tenants during the coronavirus crisis, even after the CDC ordered a temporary halt on displacement in September.

Recent studies confirm that housing security is a matter of life-and-death. As Common Dreams reported last month, researchers found that between the onset of the pandemic in mid-March and the implementation of a national eviction moratorium in early September, the premature lifting of statewide protections in the spring and summer caused more than 433,000 excess Covid-19 infections and 10,700 excess deaths.

Considering how coronavirus cases, hospitalizations, and deaths have soared this fall and are set to keep rising this winter, it is all but certain that throwing people onto the streets or forcing them into overcrowded conditions in the coming weeks will exacerbate mortality and inequality.

James Parrott, an economist at the New School, told Politico that the pandemic has generated "the most lopsided economic event imaginable."

"Low-wage workers who work those hourly paid jobs in the face-to-face service industries are most affected by this," Parrott explained. And "the problems with mounting levels of unpaid rent are going to be most severe" in the neighborhoods where low-income and unemployed workers live.

Because Black and Latino households are overrepresented among the poor, the negative effects of the coronavirus crisis are especially acute for workers and tenants of color.

Diane Yentel, president of the National Low-Income Housing Coalition (NLIHC), said in a statement released Monday that "the consequences of congressional inaction will be deadly and costly—for children and families, for communities, and for our country's ability to contain the pandemic."

Sirota and Perez laid out the prospects for extending a nationwide eviction moratorium for the duration of the crisis:

In October, House Democrats passed legislation that would create a one-year eviction moratorium, which could limit the power of Blackstone and other Wall Street landlords to throw people out of their homes during the pandemic.

The bill, though, is being blocked by Senate Republicans, whose political machine has received $35 million from Schwarzman in the 2020 election cycle. Schwarzman donated another $15 million in late November, as the GOP group ramped up spending in the two January runoff races in Georgia that will decide which party controls the Senate.

The compromise coronavirus relief bill crafted by a bipartisan, bicameral group of lawmakers would extend the CDC's federal eviction moratorium by one month and provide $25 billion in emergency rental assistance.

The NLIHC urged Congress to "quickly enact this emergency legislation—and return in January to work on a broader, more comprehensive package." According to the NLIHC, keeping renters stably housed during the pandemic will require at least $100 billion in emergency rental assistance, while homeless shelters and service providers need an additional $11.5 billion to keep the unhoused healthy and safe while trying to rapidly find permanent housing.

"While extending the CDC eviction moratorium for one month is insufficient to keep people housed for the duration of the pandemic," Yentel said, "the extension provides essential and immediate protection for millions of renters on the verge of losing their homes in January."

She noted that "extending the moratorium through January provides time for emergency rental assistance to be distributed, and for Biden to improve and further extend the moratorium immediately after being sworn into office."

"While $25 billion in emergency rental assistance is clearly not enough to meet the estimated $70 billion in accrued back rent or the ongoing need for rental assistance to keep families stably housed, these resources are essential and desperately needed," Yentel added. "Targeting the funds to the lowest-income people will help ensure those most at risk of eviction are assisted first."

John Pollock, a staff attorney at the legal advocacy nonprofit Public Justice Center, said that if Congress refuses to help the American people, "I don't see how it's possible that we're not going to see more evictions on January 1 than we've ever seen in a month."