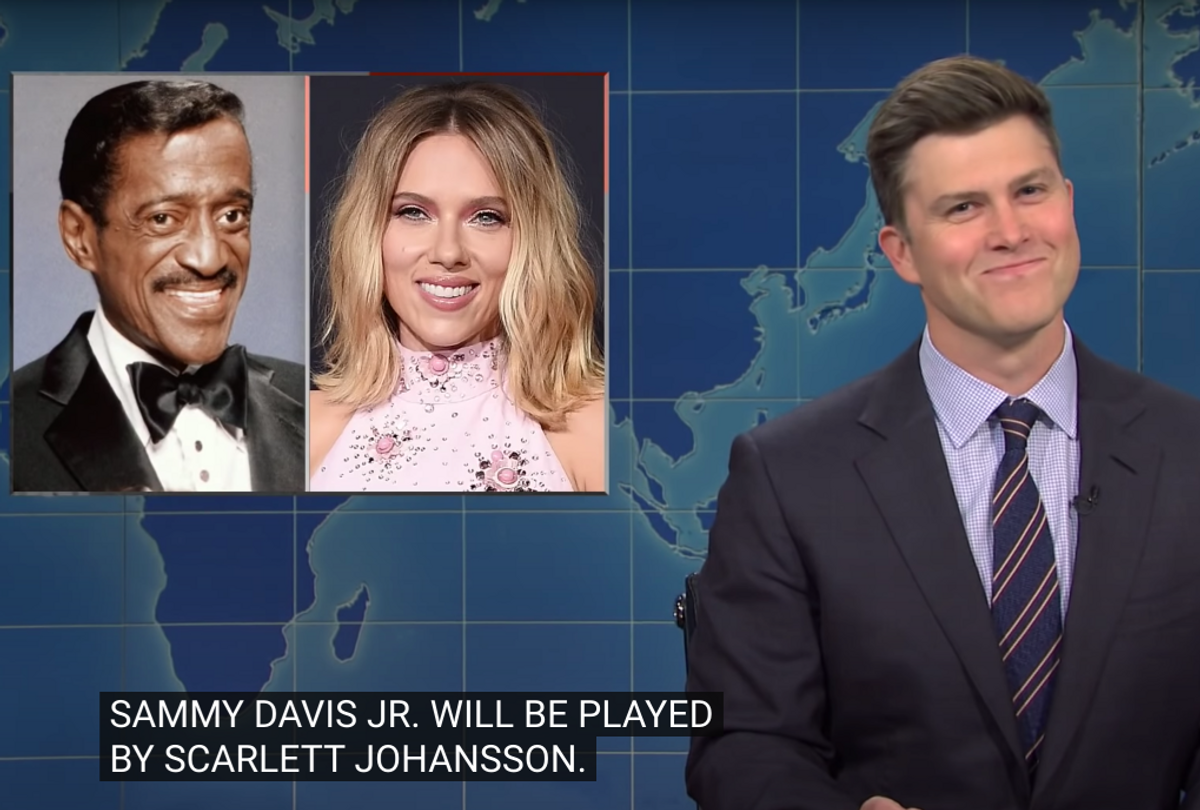 This weekend's episode of "Saturday Night Live" on NBC was packed with Christmas-themed sketches, being the last "SNL" of 2020 and all. In addition, in "SNL" tradition, "Weekend Update" hosts Michael Che and Colin Jost did their annual "Joke Swap" during the segment.

Jost, delivering lines that otherwise would've gone to co-host Che, started off with a joke about how Creed frontman Scott Stapp is playing Frank Sinatra in an upcoming biopic about Ronald Reagan. While that's disturbing enough, the joke took another turn as Jost was tricked into making a whitewashed casting joke about his own wife, Scarlett Johansson. "The good news is Sammy Davis, Jr. will be played by Scarlett Johansson!"

The joke is in reference to past controversies surrounding Johansson's casting in films like "Ghost in the Shell," which began as a Japanese manga. The filmmakers were accused of whitewashing a role that could've gone to an Asian actor. Johansson later stood by the casting. Another controversy followed when Johansson was cast as a transgender man in the film "Rub and Tug," which is based on a true story about a trans gangster in 1970s Pittsburgh who becomes embroiled in the city's Massage Parlor War.

Johansson later withdrew from the project, saying, "In hindsight, I mishandled that situation. I was not sensitive, my initial reaction to it…I wasn't aware of that conversation. I was uneducated. So I learned a lot through that process. I misjudged that."  ("Rub and Tug" is now set to become a TV series with trans writer Our Lady J and a trans actor eyed for the lead.)

As for the joke-swapped "Weekend Update" segment, which you can watch below, Che and Jost write the lines for each other, leading to such uncomfortable moments as Che eulogizing Jeffrey Epstein with "rest in power king" and Jost taking a crack at Rosa Parks.

This week's episode was hosted by "Saturday Night Live" alumna Kristen Wiig, returning to Studio 8H and being joined by pop star Dua Lipa for the musical segments.

Read more from IndieWire: The best music videos of 2020 – year in review

In other "SNL" news, Jim Carrey recently withdrew from the role of Joe Biden. Cast member Alex Moffat, whose impression was introduced Saturday night, will take over Biden duties.