So fascism came to America — but what was it wearing?

That thing about "wrapped in the flag and carrying the cross" seems to be apocryphal. It needs some updating anyway 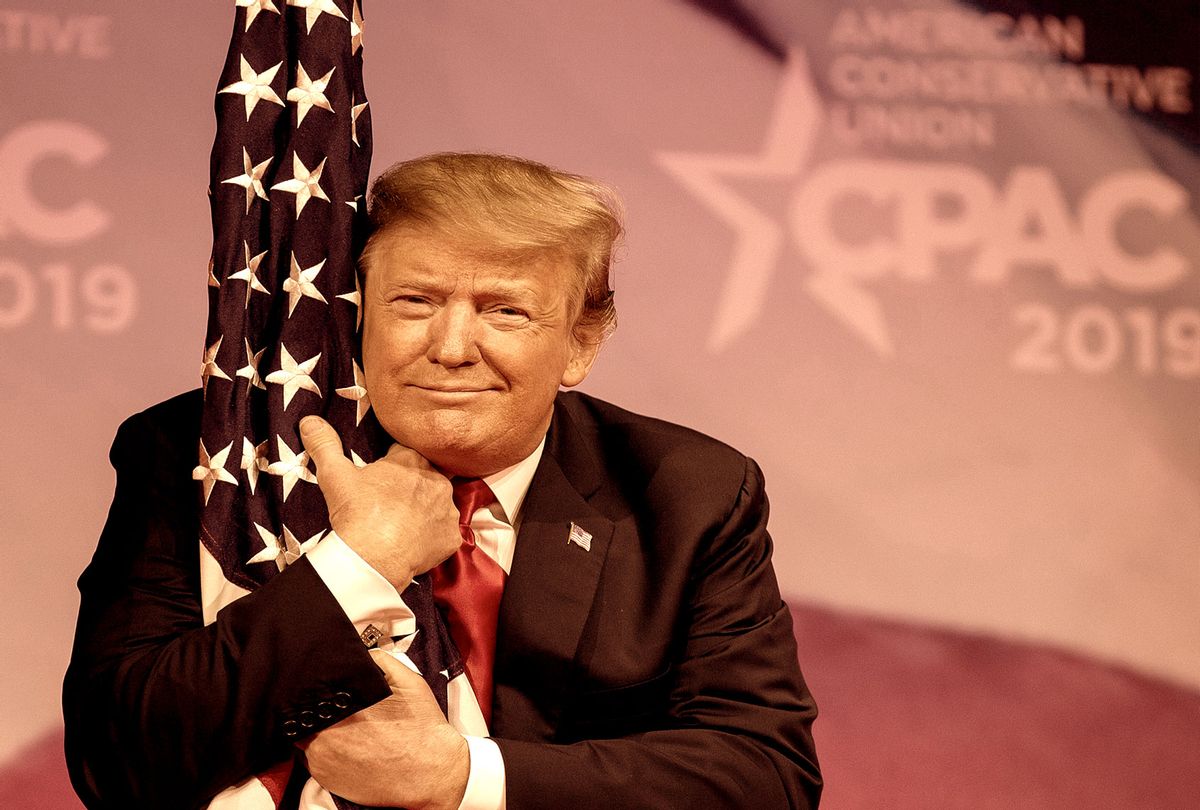 It has been said that when fascism comes to America, it will be wrapped in the flag and carrying the cross.

This well-known line has been attributed to a number of people — most often to novelist Sinclair Lewis, but also to socialist leader Eugene V. Debs and even to populist Louisiana senator Huey Long — but none of them wrote or said it in precisely the way it has come down to us. It appears to be an aphoristic stone nicely polished by being handled by a lot of people.

To have it reflect our current situation, we need to roughen it up.

When Donald J. Trump was running for president in 2016, Lewis's novel "It Can't Happen Here," written quickly in 1935 as authoritarian leaders were rising in Europe, started to sell out. In it, populist demagogue "Buzz" Windrip, a Democrat (i.e., a pre-Civil Rights Act Democrat, who would be a Republican today), wins the presidency. As Beverly Gage describes it in a 2017 essay for the New York Times, Windrip — who was based on both Long and the anti-Semitic radio priest Father Coughlin — is not exactly Trump, but he's right "there" in a number of respects:

Like Trump, Windrip sells himself as the champion of "Forgotten Men," determined to bring dignity and prosperity back to America's white working class. Windrip loves big, passionate rallies and rails against the "lies" of the mainstream press. His supporters embrace this message, lashing out against the "highbrow intellectuality" of editors and professors and policy elites. With Windrip's encouragement, they also take out their frustrations on Blacks and Jews.

So, just a super guy — someone you could really rally around. And shriek. And chant about putting people behind bars.

Apparently, the first iteration of the saying just had the bit about the time-honored false patriotism of wrapping oneself up in the flag. Then the faux-religiosity gambit of cross carrying was added.

I think we must now edit and append it further:

When fascism comes to America, it will be wrapping itself around the flag and holding a Bible upside down. And riding in a golf cart.

Except this fascism is not so much "wrapping itself with" the flag but more like sexually assaulting it.

Trump, a man who received five deferments from military service, seems to think the Stars and Stripes is a great-looking lady he can molest. ("I don't even wait!") I suspect he is less handsy with the gal he clearly respects more, the good old Stars and Bars.

Oh, I forgot the tear gas and rubber bullets. So, we append further:

When fascism comes to America, it will be sexually assaulting the flag, carrying a Bible upside down, riding in a golf cart, and enjoying the fact that tear gas and rubber bullets are in use against peaceful protesters.

OK, that's getting too long. But now, naturally, I'm remembering the time fascism was hiding in his bunker (no, not in 1945 Berlin — the more recent time, in Washington). No harm in trying it out, right?

When fascism comes to America, it will be sexually assaulting the flag, carrying a Bible upside down, riding in a golf cart, and enjoying the fact that tear gas and rubber bullets are in use against peaceful protesters — and then scurrying away to hide in a bunker.

But it just becomes less elegant, more ungainly — and so less memorable. There is so much one could add, beyond hiding in that bunker — incessantly watching "Fox & Friends," tweeting instead of working, lying like breathing — that the mind refuses to latch on to anything. There is no substance, just chaos.

Speaking of chaos, Trump and his gang of enablers have always reminded me of the year I spent in a fraternity. Somewhat to my surprise, I was elected pledge class president, and after a tumultuous year I tried my best to get a dozen young men through the seriously stupid, often dangerous and generally unhinged hazing of Hell Week, so they could, at last, become active members.

I don't care whether they were ever actually in a fraternity or not, but people like Matt Gaetz and Jim Jordan and their boisterous, under-thinking ilk — really, nearly all of the Republicans in Congress — are precisely like a bunch of entitled and semi-educated frat boys who are simply used to getting their way. They insist on it, as toddlers will do. Donald Trump is the president of this house, which has to be Delta Iota Kappa, yes, the proud DIK House. To parrot a favorite Trumpian phrase, as everyone knows, those DIKs should have long ago been kicked off campus and had their charter revoked.

OK, now I have to get the frat-boy concept in. It naturally rides with the golf cart, and it expresses so much—about white privilege, about entitlement, about binge drinking and barfing and "boofing" and generally being obstreperous and having one's way with "the babes" — one way or another. (Ask Supreme Court Justice Brett Kavanaugh if you need explanation of any of that.)

When fascism comes to America, it will be sexually assaulting the flag, carrying a Bible upside down, riding in a golf cart with various frat-boy buddies, and enjoying the fact that tear gas and rubber bullets are in use against peaceful protesters — and then scurrying away to hide in a bunker.

Oh, and crying about being a victim and about people not liking him. Well, the phrase is already unwieldy enough and even I've grown weary of it.

I know some of you would quibble with my calling this fascism. You might call this neo-fascism or proto-fascism. But I'm too exhausted at this point to look those up. Call it über-fascism or Kentucky Fried fascism or Adderall fascism, or whatever else you'd like.

Of course none of this is funny. Well, maybe it's mordantly humorous, the way you might laugh involuntarily as unmarked militarized police started shooting rubber bullets your way during a peaceful protest in the United States of America.

Though thwarted to date, the Republican assault on the votes of more than 81 million citizens continues. Eighteen 18 Republican state attorneys general, 126 Republican members of Congress, and a bunch of dead-silent Republican senators have proven themselves more than happy to go along with it. So much for their fervent belief in states' rights, and that thing called the Constitution.

And, yes, for the past number of years all journalists writing op-eds about the dangers of putting the grandson of a man named Drumpf in charge of anything are a bunch of Sinclair Lewis' Doremus Jessups, trying desperately to fight a tyrant with a mere pen. One does what one must.

It's an extended Hell Week in America, at least until this guy is out of office. So you better bone up on that Greek alphabet and be ready to "drop trou" (ask Brett about that one, too). Listen up, plebes, they want you to come out on the other end as active members of something bigly, something terrific — something that's definitely not a democracy.