Donald Trump's American carnage: He continues to ignore COVID as his GOP enablers make it worse

Let's never forget all the Republicans who enabled this catastrophe 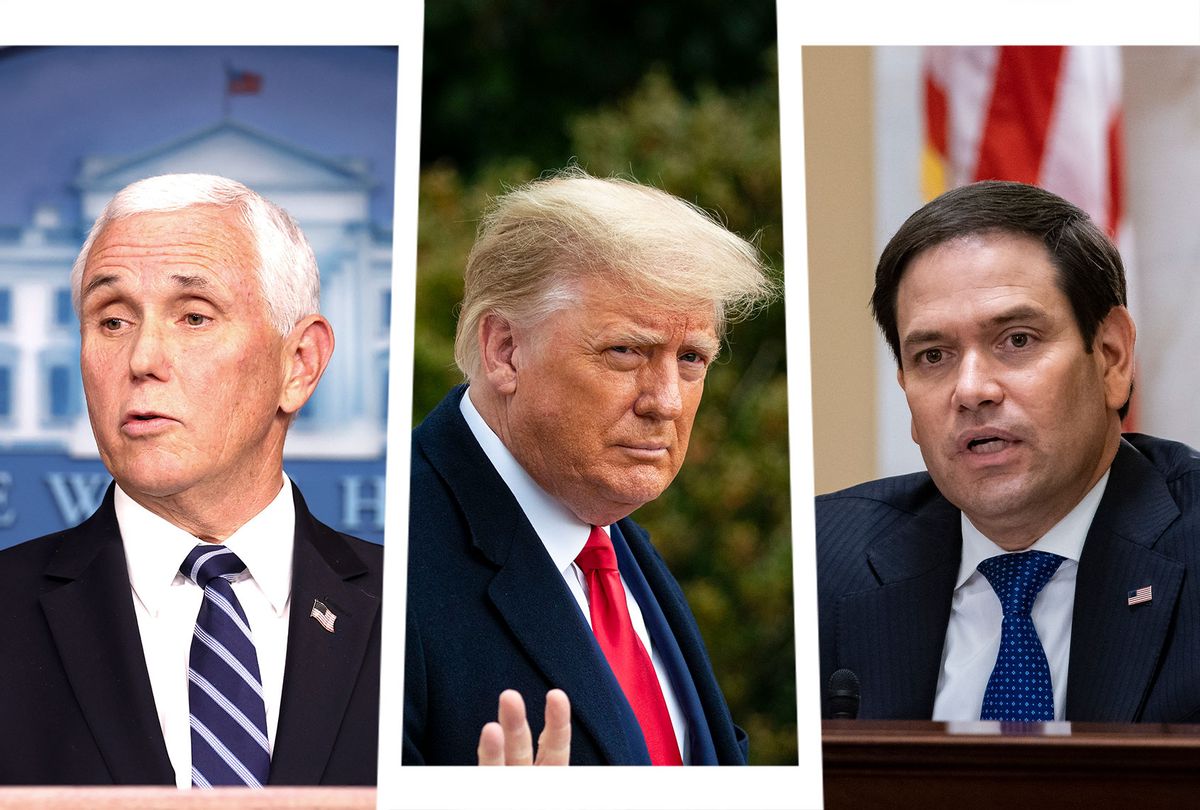 It may seem as if President Donald Trump has done nothing since losing to Joe Biden but watch TV and rage tweet about his stolen election fantasy, however, he's actually been quite busy.

He's reportedly considering a military coup or an executive order to seize the voting machines in swing states that Biden won. He spent a lot of energy pushing Attorney General Bill Barr to pursue some of his wild theories about the alleged election theft and pressed him to appoint a Special Counsel to investigate Biden's son Hunter. He's also been engaged in purging the federal government of those he considers disloyal, particularly at the Pentagon, where he has spent the final few weeks of his presidency installing some of his closest collaborators for reasons that remain unclear.

So you can't say he is doing nothing — he's just not doing his job.

Last week, we were informed that there was a major cyber intrusion into both business and government by what the intelligence services and private security companies believe was the Russian government. By all accounts, it is an unprecedented case of cyber-espionage, however, Trump had nothing to say about this for days until this weekend when he downplayed the attack:

Needless to say, he has also been silent about the worst public health crisis America has faced in over a century as COVID-19 once again surges across the country, filling up hospitals and morgues at a frightening pace. According to the Washington Post, one of his closest advisers, speaking anonymously, said, "I think he's just done with covid I think he put it on a timetable and he's done with covid. . . . It just exceeded the amount of time he gave it." Trump is known for projecting his own dark thoughts onto others so I suppose it's not even ironic that he spent most of the fall campaign insisting that after November 4th, nobody would talk about COVID anymore. For instance, he told the Republican Convention that it was all fake news, that "they want to make our numbers look as bad as possible for the election." At one campaign rally on October 24th, he told his ecstatic crowd:

This Christmas week, our country is losing an American every 33 seconds to Covid, Covid, Covid. As the Washington Post's Philip Bump points out, "every time you listen to Bing Crosby's 'White Christmas,' about five people have died of the virus between the beginning and the end of the song." The death toll is over 318,000 and climbing.

Oddly enough, Trump can't even tear himself away from his scheming about the election he indisputably lost six weeks ago to take a victory lap for the successful approvals of the vaccines. All he could bring himself to do was whine pitifully to the press that they'd better not give Biden credit because it was all his doing. He has barely mentioned the successful rollouts of the first two vaccines on his hysterical Twitter feed.

This is in keeping with his attitude about the crisis from the beginning.

You may recall that both the Washington Post and the New York Times have done deep reporting on the administration's crisis response from the emergence of the virus in January to their desperate attempt to re-open the economy in the spring to this summer's surprise surge. They are all excellent, long-form "tick-tock" pieces of how this emergency unfolded and unraveled. It was very bad in the beginning and hasn't gotten any better since.

In the latest installment, a report from the Washington Post called "The inside story of how Trump's denial, mismanagement and magical thinking led to the pandemic's dark winter," reporters Yasmeen Abutaleb, Josh Dawsey, Ashley Parker, and Philip Rucker lay out a narrative that would be farcical if it weren't so very, very tragic: If Trump and his cohorts had made even the slightest effort to encourage mitigation strategies and public health guidelines instead of fighting them all the way, they could have saved tens of thousands of lives.

The vaccines are, as the Post puts it, a "triumph of scientific ingenuity and bureaucratic efficiency" but they don't make up for the fact that the president, whom they describe as being "perpetually in denial," has led a monumentally dysfunctional federal response that was the direct cause of proportionally more deaths in the U.S. than in other developed countries. It is an embarrassment that is laid directly at his feet:

The catastrophe began with Trump's initial refusal to take seriously the threat of a once-in-a-century pandemic. But, as officials detailed, it has been compounded over time by a host of damaging presidential traits — his skepticism of science, impatience with health restrictions, prioritization of personal politics over public safety, undisciplined communications, chaotic management style, indulgence of conspiracies, proclivity toward magical thinking, allowance of turf wars and flagrant disregard for the well-being of those around him.

He would not listen to the scientists because they didn't tell him what he wanted to hear. That is the story of his presidency, isn't it? It's got to be happy talk or Trump doesn't want to hear it.

But let's not forget all the Republicans who enabled this catastrophe. From the governors who refused to take the measures that might have spared lives to their accomplices in Congress who refused to save businesses from going under so they wouldn't feel compelled to open up prematurely. Instead, they all genuflected to the man who can't hear bad news without falling apart.

For instance, Sen. Marco Rubio, R-Fl., actually had the temerity to post a picture of him getting the vaccine before everyone else:

The argument for doing that is that we need important and famous people, regardless of their politics, to get vaccinated so that others will know it's safe. I have a sneaking suspicion that I could count the number of people who will be reassured by Marco Rubio getting the vaccine on one hand, however. But ok, perhaps this is what we must do. Still, how infuriating for him to have the gall to then post this:

The obtuseness on display by a man who has excused the grotesquely incompetent response to this crisis having the nerve to lecture people who tried to save lives and businesses with almost no support from the federal government is almost too much to bear.

This is on Trump, to be sure. But all of his Republican accomplices were right there with him. They couldn't bring themselves to do what was necessary to help the economy weather the crisis and instead decided that it was better to let businesses struggle and hundreds of thousands of Americans die over these past few months. Even though the Republicans finally agreed to a $900 billion relief package late Sunday evening, i's very late and far from being enough. According to Majority Leader Mitch McConnell, R-Ky., Republicans only came to the table after months of stalling to help the two GOP Senators in the Georgia runoff election. The carnage they've helped create is unforgivable.