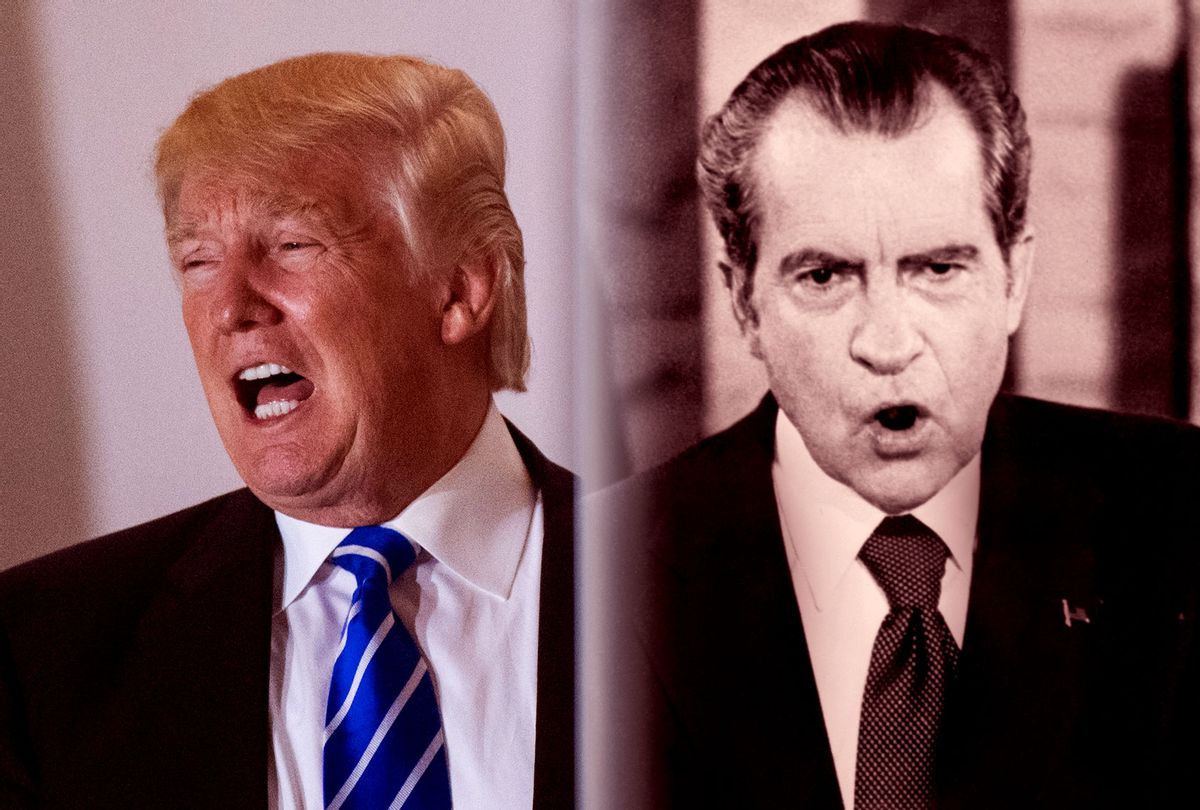 One of the more haunting images from "The Final Days," the sequel to Woodward and Bernstein's "All the President's Men," is that of Richard Nixon wandering drunkenly through the White House giving speeches to the portraits of the previous presidents as Watergate was unraveling and he realized he was about to endure the worst humiliation of his life. In a meeting with some congressman, at one point, he said, "I can go in my office and pick up a telephone and in 25 minutes millions of people will be dead," prompting California Senator Alan Cranston to warn Defense Secretary James Schlesinger about "the need for keeping a berserk president from plunging us into a holocaust."

Schlesinger went on to issue an order that if the president gave any nuclear launch order, military commanders should check with either him or Secretary of State Henry Kissinger before executing them, which is a serious departure from the normal protocol requiring an order from the Commander in Chief to launch immediately. Luckily, Nixon just moped around the White House for a while until he was finally given the heave-ho by members of Congress.

Looking back on it, what we thought of as a frightening, dangerous episode now looks like a staid and dignified affair compared to what's going on in Donald Trump's final days. We can only wish that Trump was just crying into a glass of scotch and asking Henry Kissinger to get down on his knees and pray for him as Nixon did. Instead, he seems to be having a very public nervous breakdown. Since the election, he's fired the civilian leadership at the Pentagon and replaced them with henchmen and sycophants, apparently setting of serious concern among the top brass.

Axios reported on Tuesday that he has become so frustrated that he's even starting to turn on his most trusted accomplices, including Vice President Mike Pence, Chief of Staff Mark Meadows, Secretary of State Mike Pompeo and White House counsel Pat Cipollone, all of whom he believes are failing him. He is said to believe that everyone around him who isn't actively egging on his futile efforts to overturn the election is either "weak, stupid or disloyal" and he is increasingly only listening to propagandists at OAN, Newsmax, a few select programs at Fox News and his inner circle of conspiracy mongers.

We know from various reports that Trump has been meeting with his former National Security Adviser, the recently pardoned, admitted felon Mike Flynn, and his lawyer Sidney Powell, who was formerly Trump's lawyer as well. Powell wanted to be named a "special counsel" to investigate election fraud, but according to the Daily Beast, that has been nixed by the president for now. The president's lawyer Rudy Giuliani is hostile to Powell and has told the press that she is not affiliated with the president's legal team, but he too is pushing ridiculous schemes such as having the Department of Homeland Security seize the voting machines in certain states, which the DHS has said they have no authority to do. Flynn has also publicly proposed Trump invoke Martial Law in the states that Biden won narrowly and order the military to run a new election. That Trump has been open to discussing such far-fetched plans is bad enough in itself. And for some bizarre reason, former Overstock CEO Patrick Byrne, who also happens to have had a long term affair with convicted and deported Russian Spy Maria Butina, has been present at at least one meeting with all of these people, as slightly less unhinged members of the White House attempted to push back on their wacky plots.

At the moment Trump seems fixated on the idea of having the Republicans in congress refuse to accept the certification of the electoral college vote on January 6th. This week QAnon believer Marjorie Taylor-Greene, a newly elected member of the House of Representatives from Georgia, organized a strategy meeting with Trump at the White House along with some of his most loyal supporters in the House like Matt Gaetz, R-Fl, Louis Gohmert, R-Tx, Mo Brooks, R-Al, among others. They seem hopeful that at least one Republican in the Senate will join them to object — which would turn the whole thing into a circus but change absolutely nothing.

Majority Leader Mitch McConnell begged his senators not to go along with the whole charade because it would look bad to vote against Donald Trump since he clearly lost the election. His deputy, Sen. John Thune of South Dakota, said "it's going down like a shot dog and I just don't think it makes a lot of sense to put everybody through this when you know what the ultimate outcome is going to be."

That put McConnell and Thune on Trump's ever-growing shit list. First Trump sent around a graph supposedly showing that he was responsible for McConnell's re-election and than on Tuesday night threw this out there::

But perhaps he's taking his greatest revenge by threatening to veto the COVID-19 relief bill unless they agree to give every American who qualifies a $2000 check instead of the measly $600 that they finally squeezed out of McConnell and his caucus. Democrats immediately endorsed Trump's idea and the ball is in McConnell's court as I write this. If Trump wants to wreak revenge on his "disloyal" Republicans by agreeing to send badly needed money to Americans who are suffering from his and the Republican's malfeasance I couldn't be happier. However, it's very likely that this will do nothing but blow up the bill at the last moment, resulting in some very bad outcomes. Had he involved himself in the negotiations and pushed hard for relief he just might have won the election and helped people sooner. But he preferred to pretend the pandemic was over instead. The stable genius blew that one bigly.

Trump also pumped out some pardons on Tuesday night, showing that no matter how much he is trying to convince himself that the Greek chorus in this farce isn't chanting "it's over," he knows he's still got some business to take care of. He pardoned two people convicted in the Mueller probe, three corrupt Republican allies, more horrific war criminals and some border guards who shot an unarmed drug dealer. (He also pardoned a small handful of people who deserved it, proving there is a Santa Claus after all.)

Trump is all over the place and it's hard to know what's serious and what's just the usual Trump sideshow. But he's making one thing very clear. If someone is loyal to him he will make sure they never have to pay a price for committing an illegal act as long as he's president. The incentives to do so on his behalf are right out there. We'll just have to hope none of his ecstatic followers in or out of government decide to do something about it while he's still got the power to pardon them.