Trump met with Pence before calling on the vice president to thwart the Electoral College: report

Pence was named in a recent lawsuit that seeks to block him from ratifying Biden's victory on Jan. 6 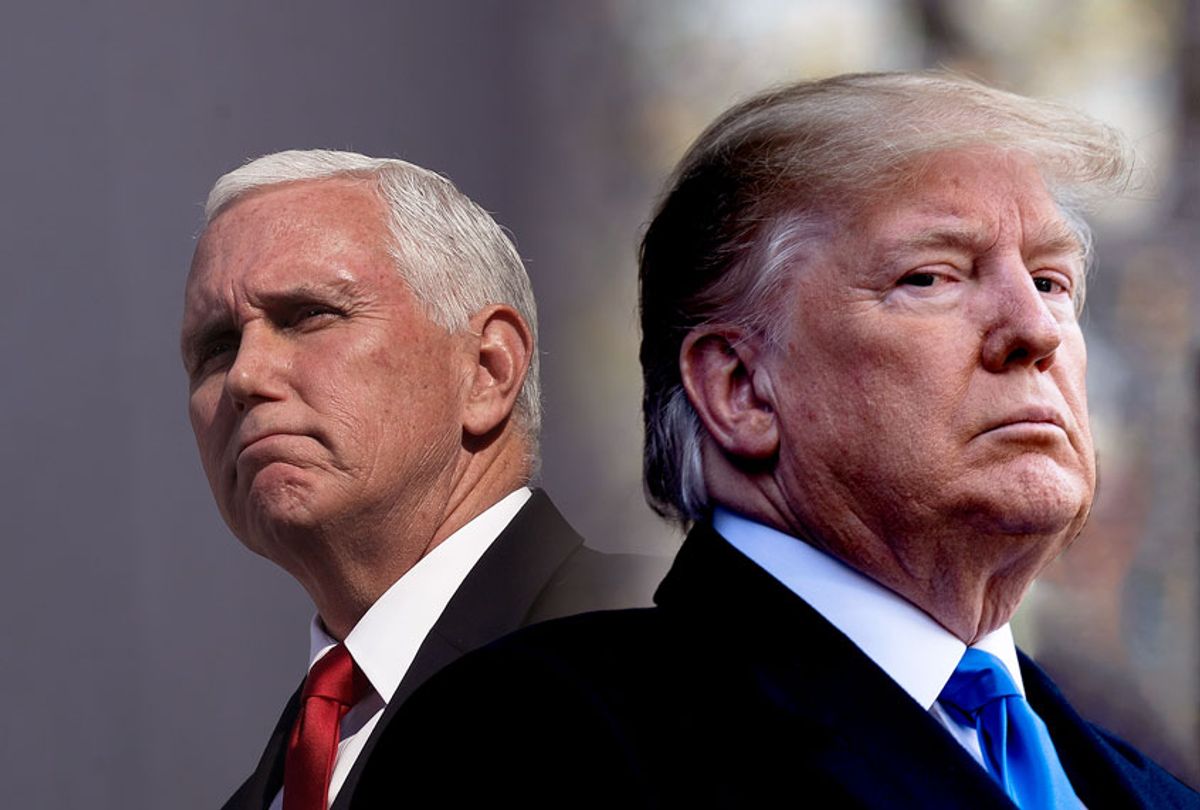 Just before President Donald Trump shared a tweet calling for Vice President Mike Pence to "act" against the Senate's coming ratification of the Electoral College vote, he reportedly met for more than an hour with his second-in-command, CNN reported.

While a person familiar with the events told CNN that the Oval Office discussion was "entirely unrelated" to the demand in the tweet, the person declined to say if the ratification issue came up. Trump soon left town for Mar-a-Lago, reportedly still obsessed with overturning his loss to President-elect Joe Biden. On the flight to Palm Beach, accompanied by his personal attorney Rudy Giuliani — the former spokesperson for LifeLock brand identity theft protection services — Trump retweeted a demand for Pence to refuse to certify the Electoral College results on Jan. 6, an impossibility that arose from baseless chatter in right-wing internet crawlspaces.

Giuliani will spend the holidays at the outgoing president's Mar-a-Lago club, where the two men will likely discuss the limited post-election actions that may still be available to them. Trump and his GOP allies have gone one-for-sixty so far in their efforts to sue their way to victory ahead of the Electoral College's vote. Giuliani now faces a defamation suit from an executive at a voting machine company who was forced into hiding following threats on his life stemming from some of the former New York mayor's remarks in those efforts.

Trump has recently griped that his vice president, who as President of the Senate will formally preside over the ratification of his loss, has not gone to bat for him. CNN reported that Trump has raised the issue with Pence, but appears "confused" about why the vice president can't use his role to overturn the election.

Speaking this Tuesday at an event in Florida for the young conservative group Turning Point USA, Pence did not mention the ratification, but promised to fight "until every legal vote is counted" and "every illegal vote is thrown out."

That same day, the conservative Thomas More Society filed a lawsuit against Pence and the entire Electoral College, claiming that Pence should not be allowed to count the votes because states have not "affirmatively voted to certify the Presidential electors" — despite the fact that the electoral college has already voted. The court filing includes Pence due to what the plaintiffs describe as his "legal obligations under the Constitution and federal law" to preside over ratification.

"I can't even describe it," election law attorney Marc Elias wrote on Twitter. "It's really dumb."

The vice president is not constitutionally bound to ratify the final vote. For instance, in 1969, when then-Vice President Hubert Humphrey declined to preside over his loss to Richard Nixon, the role fell to the Senate president pro tempore — a post currently held by Republican Sen. Chuck Grassley of Iowa.

In a parallel fit of absurdity, Rep. Mo Brooks, an Alabama conservative, has volunteered to lead a floor debate on Jan. 6, and claims he has the support of "multiple Senators." Brooks recently discussed the plan at a meeting with Trump and a number of GOP representatives, and claimed Pence had made an appearance. The debate as planned would last 12 hours, after which Biden would be ratified as the next President of the United States.

A Pence spokesperson in a lengthy email exchange refused to reply to Salon's request for comment.