Did we defund the police? No, but “big changes are happening” even after protests die down

Despite intense criticism coming from across the political spectrum, new city budgets show the protests worked 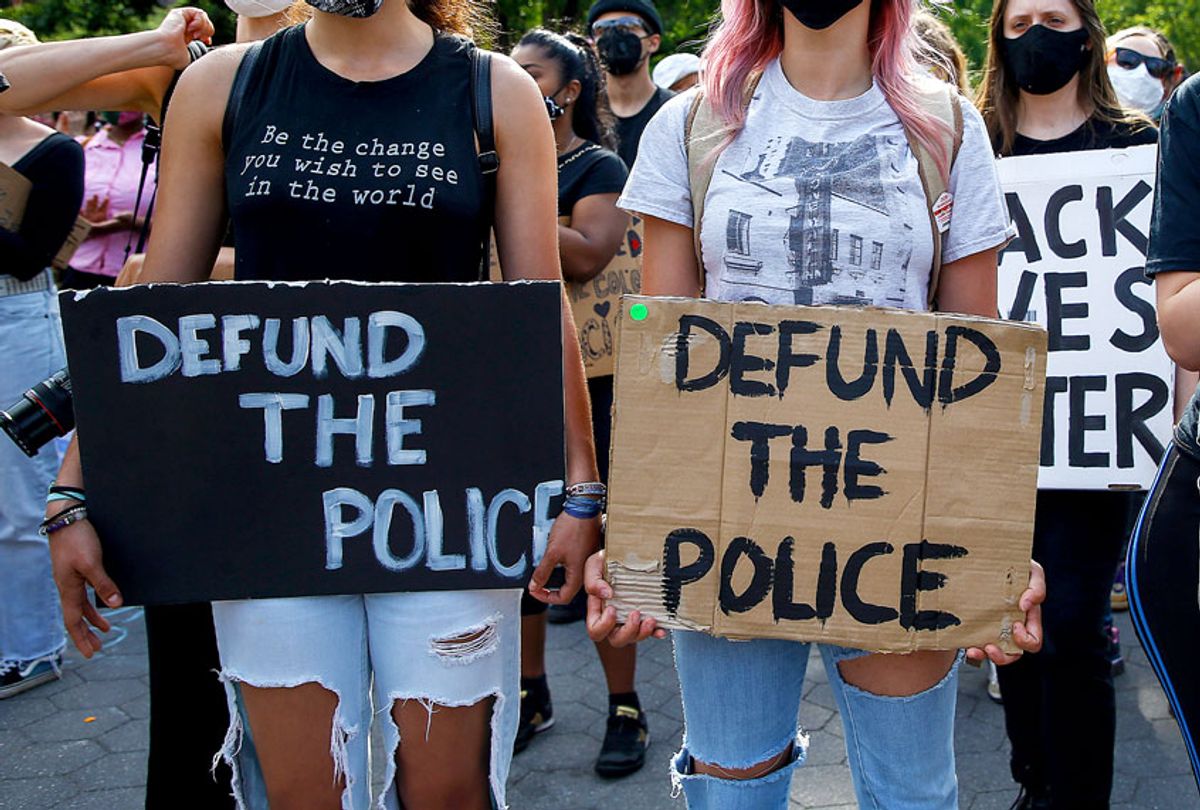 After weeks of nationwide protests over the police killings of unarmed Black people this summer, many demonstrators worried that newfound political support for cutting police budgets would die down once the television cameras turned off. But a slew of new city budgets shows that many local governments are moving ahead with reallocating police funds to community programs as activists refuse to let up.

"I feel like we're winning," Mary Hooks, a strategist for the Movement for Black Lives and co-director of the Atlanta-based advocacy group Southerners on the Ground, told Salon. The protests, she said, succeeded in placing a demand "that was probably not even possible years ago" directly at the center of public discourse around policing.

Los Angeles, San Francisco, Austin and Denver are just some of the cities that significantly cut their police budgets with an eye on reinvesting in social programs.

"Big changes are happening and millions of dollars have been reallocated," said Alex Vitale, the author of "The End of Policing" and a sociology professor who heads the Policing and Social Justice Project at Brooklyn College. "I see a huge amount of momentum, actually, in terms of real programmatic changes happening."

Los Angeles lawmakers agreed to slash the police budget by $150 million last month, nearly 10% of the LAPD budget. San Francisco lawmakers approved more than $60 million in cuts over the next two years, nearly 10% of that city's police spending. Denver slashed its police and related spending by more than $50 million, nearly a 10% cut. Seattle reduced its police budget by $69 million, nearly 20% of its police spending.

To be sure, some of the cuts were necessitated by the decline in tax revenue due to the coronavirus pandemic. More cities are expected to slash police spending after Congress failed to provide additional aid to cash-strapped state and local governments, which face an estimated $170 billion shortfall over the next two years. But many cities are also moving police officers out of schools and changing the way authorities respond to calls related to mental illness and homelessness. Police budget cuts alone do not show the full picture.

Harris County, which includes Houston, recently consulted with Vitale on a plan to "roll out a major alternative to using police on mental health crisis calls," he told Salon. "Oakland, California, shut down its school policing operation, as a result of public pressure. Portland, Maine, shut down its school policing. There are a lot of places that are rolling out a program here or there, or exploring things. And then there's an even bigger list of cities where I think there are going to be major battles over this in the next budget year."

In some cases, cities are increasing funding for social services even if they are not cutting police budgets. Atlanta recently increased its police budget but also vowed to invest in community programs after slashing its corrections budget.

Hooks said that the protests came just as Atlanta came out of its budgeting session and city officials "refused to listen to what the public was saying about pulling resources from the police."

Though Mayor Keisha Lance Bottoms has committed to closing the city jail, it is "still open," Hooks said. "That money that has been allocated from the corrections budget, it's supposed to go into turning that space into a community wellness center."

Hooks said activists were ramping up pressure on city lawmakers and predicted the issue would be key in 2021 local elections.

"We've been doing homework to gather people and talk to people and knock on doors to talk about reimagining public safety and to talk about money the police had that should be going into our communities, hopefully making that a hot topic in the discourse of the local election," she said.

Not all cities that vowed to dramatically slash their police budgets have moved forward with actually doing so. A majority of the Minneapolis City Council vowed to "dismantle" its police force in the wake of the killing of George Floyd, which launched the worldwide wave of protests. The council ultimately reallocated just $8 million, or about 4.5% of its $179 million police budget, while keeping staffing levels at their current rate.

"Look, nobody in this movement, which has been around for years, imagined that some city government was going to zero out the police budget because we had some protests this summer," Vitale said. "That was never in anyone's imagination. If you look at what people in Minneapolis were calling for, it was very measured. Now, the city council has some people on there who were very sympathetic to the deep critique of policing. In the face of the protests, they got some pledges to try to move the city in a different direction. I think this is still going to happen, but it's not something you can just do overnight."

Vitale said the rhetoric about eliminating police departments got "overblown," adding that that "wasn't even really what the movement was calling for."

"What the Minneapolis plan called for was a process of consulting with communities about their public safety needs, and then to look at what alternative interventions would look like and begin to try to roll those out," he said. "I think we're just going to continue to see more of that."

Vitale was highly critical of New York Mayor Bill de Blasio's claim that the city cut $1 billion from its police budget when it really just shifted some numbers around. The city plans to move some positions out of the NYPD into other departments and potentially decrease the police overtime cap, the mayor's office has said, but the budget passed this summer did not do any of that.

"New York City made a lot of noise, but there was no there there, and we all knew that. It was a fake pledge, and it was clear from the outset that it was all fake," Vitale said. "They really didn't do anything. That was all incredibly vague." He added that at least de Blasio, whose term ends next year, "has finally acknowledged the need to create some kind of non-police response team.

"The mayor has increased funding for community-based anti-violence" programs," Vitale said. "So they are doing things that are in keeping with what the movement is demanding. They're just not calling it 'defund the police.'"

The movement to reallocate police resources has also come up against a dramatic rise in crime rates across the country. Some critics have blamed the budget changes for the rise, although that defies logic: The crime spike clearly began at previous funding levels. Cities that have increased their police funding have seen crime rates increase as well.

Still, the perception of a possible linkage has become an "impediment" to activists because it's being used by law enforcement and "centrist politicians" against them, Vitale said.

"Everyone in the movement knows that there's a lot more work to be done at the community level," Vitale said. "But if you look at the cities that have actually shifted resources, these are cities where there has been on-the-ground organizing for a number of years. In those cities, there is broad support among low-income Black and Latino communities for these interventions."

He noted that as many as 40% of poll respondents backed defunding the police over the summer, which critics said showed the movement was unpopular.

"My reading of that was entirely the opposite," he said. "I couldn't believe that  40% of the people are supporting this idea. That was beyond my wildest expectations. So we've seen tremendous inroads, but this is not going to happen overnight. Everyone on the ground doing this work is in this for the long haul. This is going to take years, to change a logic that's been in place for generations."

Hooks said the pandemic has made it harder to organize, particularly when it comes to city council meetings and public appearances by lawmakers.

"It's difficult. I'm not going to pretend like it's easy," she said. "That's why I think the elections of 2021 here in Atlanta are going to be so important, because many of these cats are going to be showing their faces. They're going to be out in the community more than we've been able to physically put eyes on them in the summer. We have to use all the means necessary."

The push to reallocate local police funding has also encountered pushback from conservative governors, who could roll back the progress made on the ground. The city of Austin approved a plan to slash its police spending by more than 30%, for instance, but Texas Gov. Greg Abbott, a Republican, has threatened a state takeover of local police departments in response to the cuts.

States will certainly try to fight police cuts, Vitale said, "but there is a lot of local control over police budgets." He predicted that more cities will move to cut police spending next year.

Hooks said the prospect of someone like Georgia Gov. Brian Kemp rolling back potential cuts in cities like Atlanta was a "big concern."

"Here in the South, with the right continuing to maintain control and power at the state level, we're keeping our ear to the ground because we are hearing that different states are trying to take full control of police forces all across the state," she said. "We know what that battle is, in terms of, you can live in a place like an Atlanta that might seem 'progressive,'" but must contend with a state that wants to "roll back local wins."

"As much as power is built locally, we know why it's critical to build statewide power," Hooks said, adding that her group has been "starting new chapters and building our relationship with other movement and coalition partners across the state. We know they're going to come for us. We know they're going to try to roll back all the things that we win locally. But we also know that it's our work to continue to organize and mobilize people, to fight, to protect those things we see as necessary that are going on our community.