Best of 2020: They arrested me for playing basketball 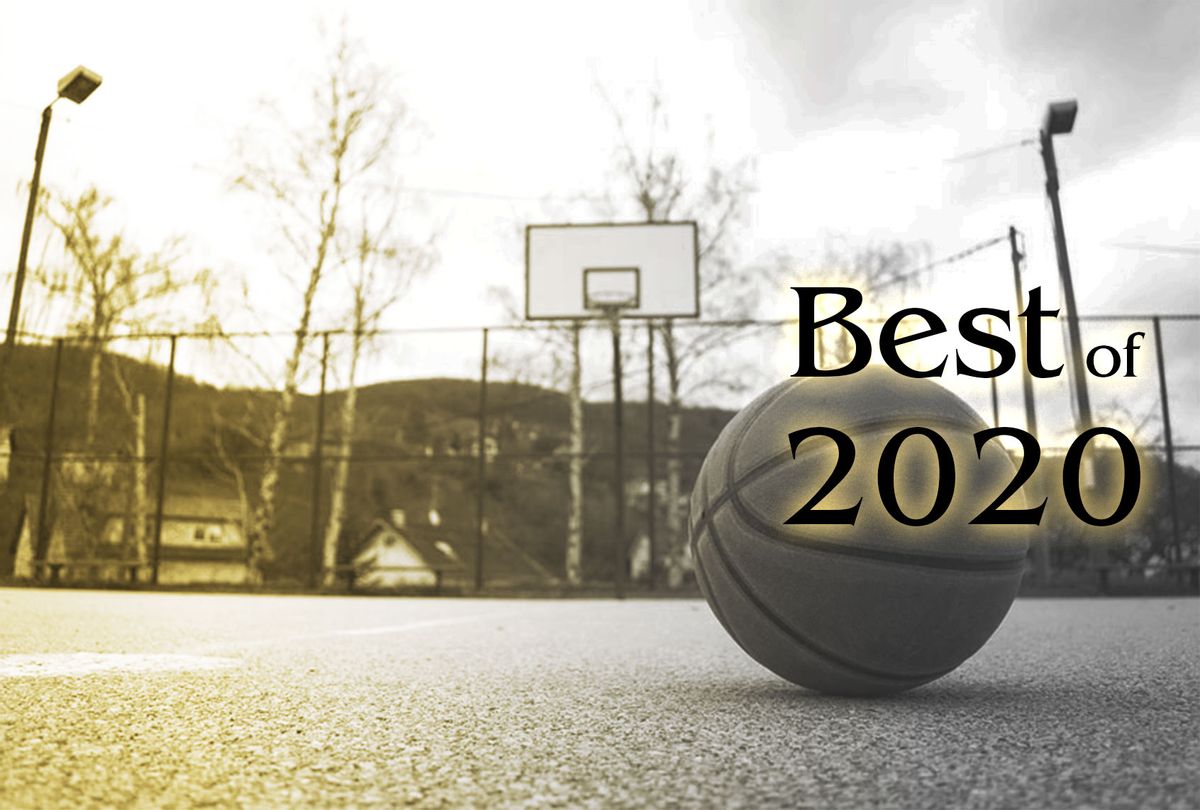 This essay was originally published in Salon on September 12, 2020. We're revisiting Salon's Best Life Stories of 2020 now through the end of the year. Read more Best of 2020 here.

My tidy bedroom at 1784 Devonshire Road, on the northside of Columbus, Ohio, is where I learned the craft of creating Magic through my imagination. My bedroom was my ark, a planet within a universe of physical, verbal and emotional abuse that lodged inside my home. Upholding my imagination were a couple of books, and the stacks of King, XXL, Slam, and The Source magazines that were neatly stacked inside of my closet or sprawled across my bed.

I studied bylines just as much as I poured over the feature stories. When creating Magic inside my ark, I attached faces to the bylines. Inside my mind's eye, me and my imaginary writer friends would bond over, and debate hip-hop and basketball. We traded cards and looked through Becketts together. I imagined flying to California to interview Nas, Jay Z, Scarface Denzel Washington, Wesley Snipes and Omar Epps.

But despite this Magic inside my mind, real life awaited me outside of my bedroom.

I was unwinding inside of my magical ark after a long day as an 8th grader. Before I could get comfortable and munch on an after-school snack, I saw two police officers walking toward the front door. This can't be good. I knew I hadn't committed a crime, but I was recently released from the Franklin County Juvenile Detention Center. My mom had developed a habit of involving the state of Ohio in our business, so I was sure that the police came to the house for me.

This situation started with me throwing a brick through the window of a childhood friend-turned-foe.  At the conclusion of this fiasco, I served a few days in jail, and my mom had to pay $70 to the kid's mother. But the judge played on my mother's ignorance by suggesting that she put me on house arrest, and If I were to go outside, she should call the police and have me arrested. It must be noted that I was not required to wear an ankle monitor or report to a probation officer. Basically, the judge told my mom to put me on punishment. My mom, an uneducated general laborer, was probably too intimidated to question the judge's agenda. As one who follows a general train of thought, my mom, as well as many others parents, fell for the false narrative that jails solve problems created by trauma, poverty, and lack of education.

After a couple of days on house arrest, I decided to go play basketball at the local rec center, something that I did regularly. I didn't think my mom would actually call the police on me, but unbeknownst to me, she did. A tall, Black police officer, followed by his white partner entered my bedroom. Seeing the magazines, "Night" by Eli Weisel and Asha Bandele's "Daughter" laying around my room, the Black officer told me that I seemed like a smart kid, but I needed to follow rules If I wanted to be successful.

"Your mother told us to come get you, because you went outside when you weren't supposed to," he said. "She doesn't hate you, she's only called us because she cared. She cares about you." With this, I was placed in handcuffs and taken to Franklin County Juvenile Detention Center.

As a radical dreamer, I see a world where police officers provide resources that will assist parents and children in unearthing the traumas associated with unhealthy behaviors. I envision a world where when a police officer sees stacks of magazines and books inside the room of a 12-year-old kid's room, the officer will usher the kid to a community program that will help hone his interest in hip-hop, journalism, and Black history.

Since the killings of George Floyd and Breonna Taylor, activists have been asking city council members to redirect money from police departments to community programs. One of the theories with #DefundThePolice is that more education will reduce crime. In recent weeks, some districts have defunded police departments. Baltimore City Council voted to reallocate $22 million from its police department to recreation centers, trauma centers, and forgivable loans to Black-owned businesses. Los Angeles is reallocating $100 million dollars of police department budgeted funds to marginalized communities. Defunding police departments, I believe, is a step toward ending the culture of punishment.

We were in our morning art class. My fellow inmates were either pretending to be, or seriously engaged in the day's lesson. Near the front of the class, a group of baby faced inmates created art with popsicle sticks. Not me, though. Firstly, I wasn't interested in playing with popsicle sticks. Secondly, the activity did not relate to anything that I was experiencing at home. I was less than 24 hours removed from seeing my mom tell the judge that she didn't want me. Being creative with popsicle sticks wasn't going to help heal me. With tears on the cliff of my eyelids, I stayed aloof, sat next to a window looking down at the cars speeding through I-71.

Days turned into weeks in jail. We wasted time by debating who's the best MCs and NBA players, riffing on each other, and lying about our sexual exploits. There were fist fights, too. But overall, we laughed more than we fought. We were still babies, and very much concerned with being kids. Our frolic behavior was a combination of holding on to loose threads of childhood joy, immaturity, and us being ignorant of the trap we were in. Unhealthy relationships, drug addiction, prison, rehab facilities and death awaited us. The correctional officers knew this, too.  But they weren't community activists dedicated to appeasing underlying issues that led to juvenile delinquency. Also, many of our parents lacked the language, education, or in some cases mental faculties to understand what was going on. So, there we were. Little kids, 12-13 years old, stretching out useless hope on a road that was already predetermined with convictions and addictions.

Mr. Wrench, a freshly dressed Black correctional officer assigned to the pod I was housed at in Franklin County Juvenile Detention Center, told us that some students from Wilberforce University were coming to the jail to engage with us. Mr. Wrench explained that Wilberforce was the first private HBCU. I'd never heard of Wilberforce or HBCUs, but I was interested. Spending time with Black college students seemed interesting. Much more interesting than that wack art class.

The enthusiastic student-teachers regaled me with seeds of hope. Their presence was comforting, and they acted as if they'd known us for years. On the first day of class, they played a scene from the movie "Roots," which was new to me. In the clip, Kunta Kinte, played by actor LeVar Burton, is chained and whipped until he accepts his new name, Toby. We then had a discussion about identity, how we saw ourselves, how our friends saw us, how the world sees, versus how we wanted to be seen.

The following week, we read and discussed passages from Chinua Achebe's "Things Fall Apart," which was new to me, too. And once again, I was taken aback by the simple profundity, and inventiveness of a Black creator that I never heard of. Reminiscent of "Of the Meaning of Progress," one of the student-teachers expressed special interest in me. She spent much of the class sitting next to me, helping me pore over sentences that I jotted down. I believe she understood that I was aware of my ignorance, or maybe I reminded her of a loved-one with unlimited potential that slipped through the cracks. After the readings of "Things Fall Apart," we only saw the Wilberforce student-teachers twice. It was a four-week class, broken down to once-a-week intervals. On their last day at the jail, I cried.

For a few weeks, through books, writing and a show of concern from some college students, I experienced the magic that I used to create in my bedroom. But budgets stripped me of meaningful education given to me by Wilberforce student-teachers. I was eventually released from juvenile jail into a life of drug dealing, adoption, violence, a cocaine addiction, and a prison sentence at Parchman, Mississippi State Penitentiary. It was in Parchman where I had to unearth the power of magic as a way to cope with the calendars that I served in prison.

As America continues to fight with moral issues, the college board has launched a national curriculum on race. The curriculum will allow students to study Black life through the slave trade and other movements led by minorities. The new curriculum is supposedly more than a traditional African American history course. As an example, a student might trace the roots of hip-hop to Jamaica, redlining, and gentrification, or conduct independent research on Black power educational institutions.

Had I had this curriculum, or one similar been available to me as a child, it's safe to say that I would've dodged prison, as well as drug addiction. Police officers are not concerned with reaching hearts and minds the way that Wilberforce student-teachers touched my heart. These college students introduced me to content that directly related to my experiences. They also brought out in me an eagerness to learn. This is why defunding police departments is important — real change comes from shifting thought patterns, but people have to be put in place to help impressionable minds wrap their minds around unhealthy thought patterns.