In a year of Black Lives Matter protests, Dutch wrestle (again) with the tradition of Black Pete

An annual tradition or a national embarrassment? 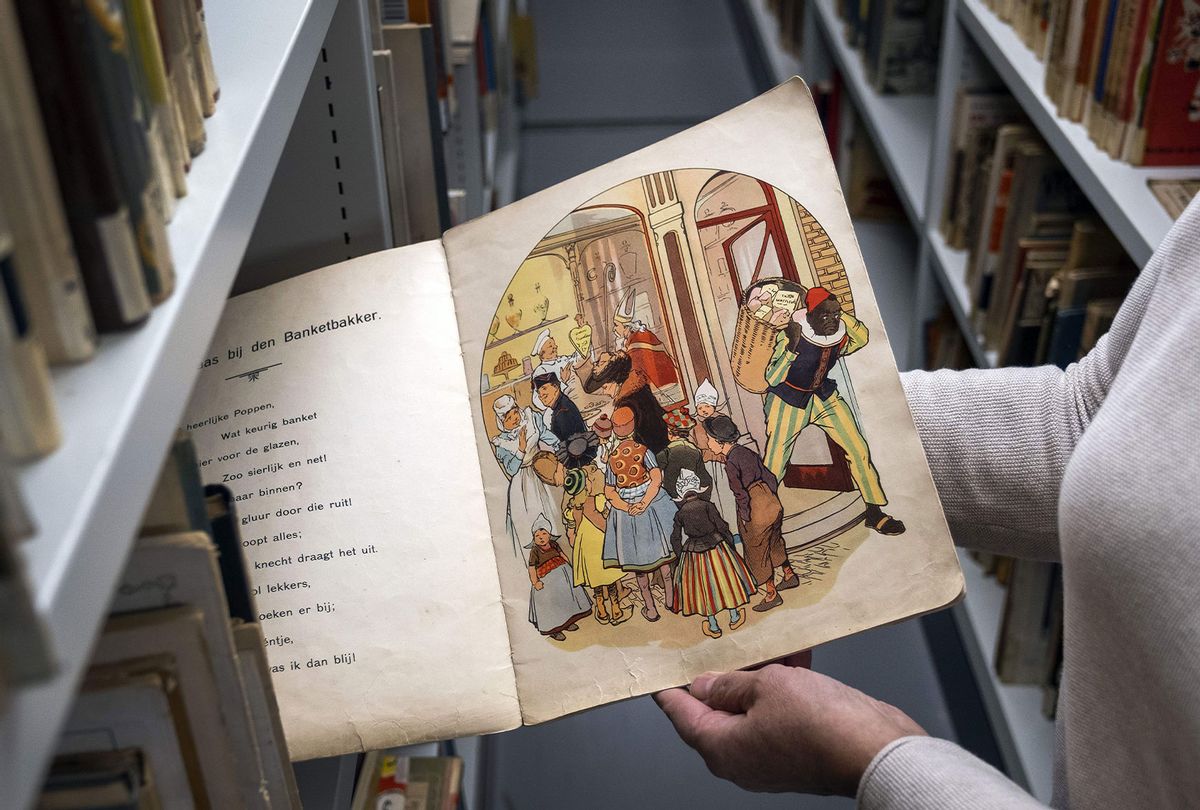 An employee of the Amsterdam Public Library (OBA) shows a book with Sinterklaas and Zwarte Piet (Black Pete) in Amsterdam, on November 12, 2020 - The library is removing books with traditional Zwarte Piet from the museum to a safe. (RAMON VAN FLYMEN/ANP/AFP via Getty Images)
--

As Black Lives Matter protests and social uprisings spread across U.S. cities in the summer, the civil rights icon the Rev. Jesse Jackson wrote a personal letter to Dutch Prime Minister Mark Rutte over an annual tradition that many believe to be racist.

Every Dec. 5, people across the Netherlands paint their faces black and don afro wigs to celebrate the arrival of Black Pete, the blackface servant of St. Nicholas who helps to deliver presents.

"Your Excellency," he wrote, "as the whole world mourns the brutal murder of George Floyd, followed by the worldwide mass protest demonstrations calling for actions to combat racism, I do not think that it was appropriate for you to explain that you understand better the sufferings of Black people . . .  and that you do not consider Black Pete as racist."

As scholars who have researched blackface in the U.S., the Netherlands and worldwide, we believe the episode captures the evolving though ambivalent Dutch attitudes to Black Pete, and the need for a larger global reckoning regarding blackface performances in general.

In his letter, Jackson argued that the tradition of Black Pete could not "be separated from the very offensive tradition of blackface" and noted that the Rev. Martin Luther King Jr. recognized that "there are times when it's appropriate to be political, but sometimes it's more important to be prophetic — to just do what's right."

This year isn't the first time that the blackface performance tradition of Black Pete has come under international scrutiny. In recent years the controversy has received growing attention outside of the Netherlands.

Backlash against the tradition has seen such U.S.-based companies as Amazon and Facebook no longer allowing the depiction of Black Pete on their sites. In the Netherlands, too, the tide seems to be turning in the wake of the Black Lives Matter protests. Prime Minister Rutte has indicated that his views on Black Pete are changing, saying he is aware of the pain these depictions and performances might cause.

Libraries across the Netherlands have silently started removing children's books that contain illustrations of Black Pete, arguing the tradition is at odds with public decency.

And this year's arrival of St. Nicholas by steamboat, traditionally a few weeks before Dec. 5, had him surrounded by so-called Soot Petes instead of Black ones. Rather than a completely blackened face, Soot Petes have a face streaked with lines of chimney ash — supposedly caused by their climbing through the sooty chimneys to deliver gifts. It is the only variation of Pete that is acceptable to Kick Out Black Pete, the Dutch activist organization founded in 2014 to end any racially offensive representation of the character.

In a representative national poll from November, opposition to replacing Black Pete with Soot Pete decreased from 66% to 43%. And only 19% thought that Black Pete would still exist in 10 years' time.

However, this is only part of the story. Prime Minister Rutte indicated that a ban on Black Pete should not be a task for the central government, arguing that cultural change happens on its own. And a closer look at the national poll from this year reveals that only 17% consider Black Pete to be a racist phenomenon; instead, they see it as part of their Dutch cultural history.

The Dutch tradition of the Catholic St. Nicholas dates back to the Middle Ages, while Black Pete has often been associated with Indo-European traditions of devilish characters with a mixture of black masks, horns, faces and clothes who would occasionally accompany a white, gray-haired man bearing gifts. While the tradition of Black Pete may not have been directly related to minstrelsy or slavery, its influence was unmistakable, and in the second half of the 19th century the Dutch character of Black Pete increasingly adopted aspects of minstrelsy performances, which were a popular element of the Dutch theater repertoire at the time.

The increasing support for Soot Pete's replacing Black Pete stems, however, not so much from a desire to be anti-racist as with people's "being fed up with the ongoing debate" or "wanting to restore the peace during a children's festivity," as respondents in the national survey testified. In a final twist, Google has taken the pressure surrounding the tradition a step further, banning Soot Pete too from its advertising a couple of weeks ago, arguing that the alternative compromise, which is still supported by Kick Out Black Pete, is also based on racial stereotypes.

A 2018 Dutch production of "Othello" was only the second in the country's history to feature a black actor in the lead role — the first was the American actor Ira Aldridge's performance in 1863. The 2018 production was well received, and the media hailed the introduction of a black actor and the production's focus on racism — a first in Dutch Othellos. Yet an inspiration for that performance, the 2017 book "Hello White People," which criticized Dutch blackface and focused on anti-Black racism, was derided by both left- and right-wing media for exaggerating the problem and being a poisonous product of identity politics.

Variations of the debate over blackface in Dutch traditions are playing out across the globe. The use of blackface by contemporary Japanese singers on variety shows has come under scrutiny in recent years. In the United States, television stars like Tina Fey, Jimmy Fallon, Jimmy Kimmel and Sarah Silverman have all apologized for their use of blackface in the 21st century. Meanwhile, earlier this year in Russia a pro-Kremlin television show mocked Barack Obama in a sketch featuring blackface.

As Jesse Jackson warned, Black Pete cannot be understood in isolation from the history of blackface. Nor should Black Pete be addressed as an isolated Dutch problem. If we accept Prime Minister Rutte's view that cultural change happens without government intervention, then the conversations about the history, significance and legacy of blackface performances need, we believe, to be more robust, more global and more sustained.