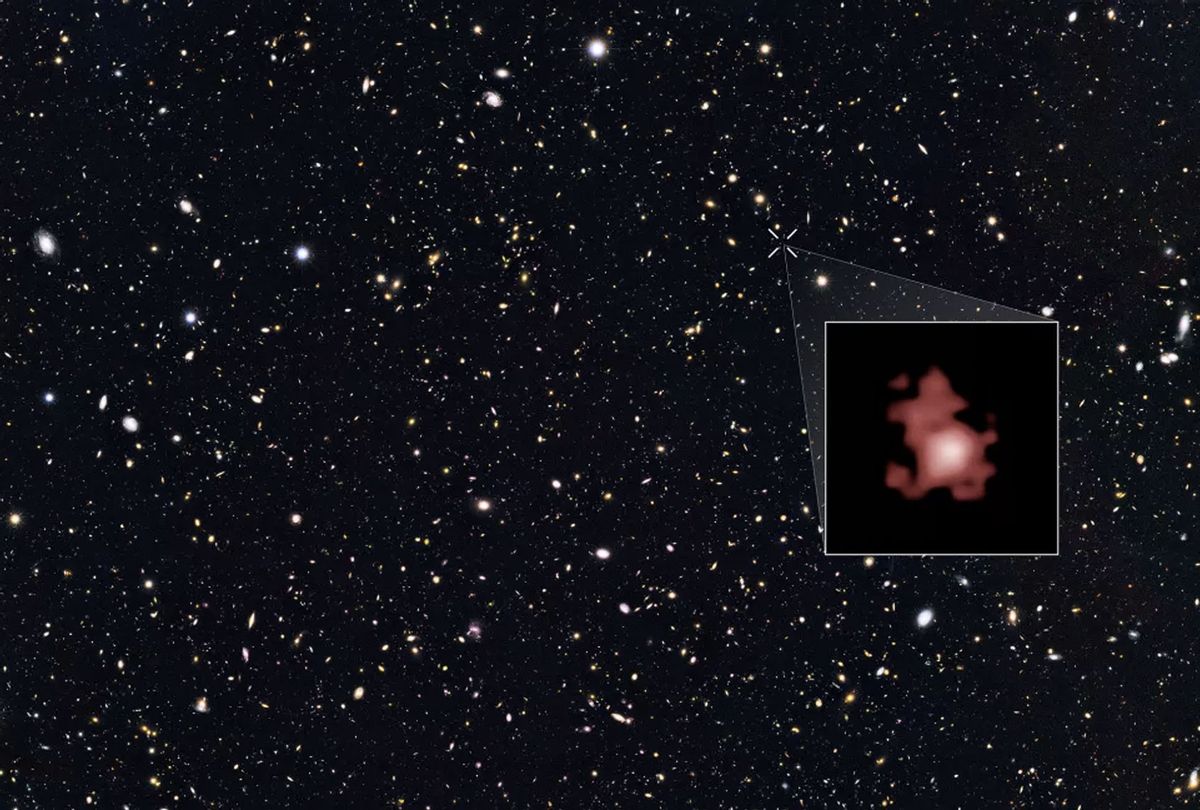 Looking out into the universe with a telescope means looking back in time, as the speed of light is so slow that even the light of nearby stars in our own galaxy takes years or millennia to reach us. As such, the very distant galaxies also offer humans a peek into the universe's past — which is what makes the discovery of the most distant galaxy ever found also the most ancient.

According to a new study published Dec. 14 in the journal Nature Astronomy, astronomers have confirmed the most distant galaxy in our universe. Named GN-z11, the galaxy is so distant that it is believed to make up the boundary of the universe at 13.4 billion light years, or 134 nonillion kilometers, from Earth, meaning that the light we see from it left 13.4 billion years ago — only 400 million years after the Big Bang.

Nobunari Kashikawa of the School of Science at University of Tokyo, a co-author of the study, explained to Salon that the current designation for GN-z11 as the "oldest" galaxy might be short-lived, as telescopes continually scan the skies.

"GN-z11 is the most distant galaxy we know today, so far, and maybe tomorrow we'll find a more distant galaxy," Kashikawa wrote via email.

Though the distant galaxy was originally spotted by the Hubble Space Telescope in 2016, Kashikawa and his team used the Keck I telescope in Hawaii to confirm its age and distance. At the time of its discovery, astronomers estimated that it was 13.4 billion light years away, based on the discovery of what appeared to be a break, known as the "Lyman break," in the "spectrum characteristic of distant galaxies," Kashikawa explained.

Trying to spot such a distant, faint galaxy pushed the Hubble Space Telescope to its technological limit.

"Our spectroscopic observations reveal the galaxy to be even farther away than we had originally thought, right at the distance limit of what Hubble can observe," Gabriel Brammer, author of the 2016 study, said in a statement.

Astronomers measure the distance of a galaxy by determining its redshift, which is a measurement of how fast it is moving away from Earth. Since the universe is expanding, every object in the sky that is not gravitationally bound to our own galaxy is receding from Earth; as they do so, these objects' light stretches into longer and therefore redder wavelengths. The farther the galaxy, the greater the redshift.

To determine how far GN-z11 was from Earth, Kashikawa's team studied its spectral features, since examining the observations made by the Hubble Space Telescope were limited.

"Even the Hubble cannot resolve ultraviolet emission lines to the degree we needed," Kashikawa said in a statement. "So we turned to a more up-to-date ground-based spectrograph, an instrument to measure emission lines, called MOSFIRE, which is mounted to the Keck I telescope in Hawaii."

Kashikawa told Salon it was "difficult" to determine if there was really a break in the spectrum or not. Specifically, the team pivoted to look at ultraviolet light to find the redshifted chemical signatures. What it boiled down to was having the right equipment to confirm and identify the spectral break.

"Since its wavelength cannot be measured accurately, the accuracy of determining the distance to the galaxy was uncertain," Kashikawa told Salon via email. "Once we believe that the carbon and oxygen emission lines we detected at this time are real, it is not so difficult to calculate the distance from them."

Even though this galaxy is far, far away, astronomers are hopeful that it holds information that we can learn about our own galaxy and the universe.

"The detected light of carbon and oxygen suggests special physical conditions not found in present-day galaxies," Kashikawa told Salon. "The age of GN-z11 is estimated to be only 70 million years and the estimated mass of a billion times that of the Sun (the stellar component) suggests that this young galaxy was born and grew rapidly."

Kashikawa added: "The fact that carbon and oxygen were found in GN-z11 indicates that this galaxy is not the first (metal-free) galaxy in the universe." Since elements heavier than hydrogen and helium are only forged in massive stars, the presence of heavier elements like carbon indicate that the stars in the galaxy are at least second-generation, meaning one generation of large suns has already lived and died, expelling their metals into the galaxy.

This means, Kashikawa said, that the first galaxies in the universe are still "in a more distant universe unknown to mankind."

Next year will be a big year for astronomy, especially in terms of how we better understand the universe.

"The frontier of the farthest reaches of space is expected to expand dramatically," Kashikawa said.

And that's in part because the James Webb Space Telescope is scheduled to launch on October 31, 2021, from French Guiana, and will build on the legacy of the Hubble telescope. Specifically, it will observe the infrared universe and detect light from distant, old galaxies. Infrared light cannot be detected well from Earth due to interference from the atmosphere, and thus probing the universe in infrared requires a space-based telescope.

"The [James Webb Space Telescope] observatory will detect light from the first generation of galaxies that formed in the early universe after the big bang and study the atmospheres of nearby exoplanets for possible signs of habitability,"  Eric Smith, NASA Webb's program scientist at the agency's headquarters, said in a statement previously.