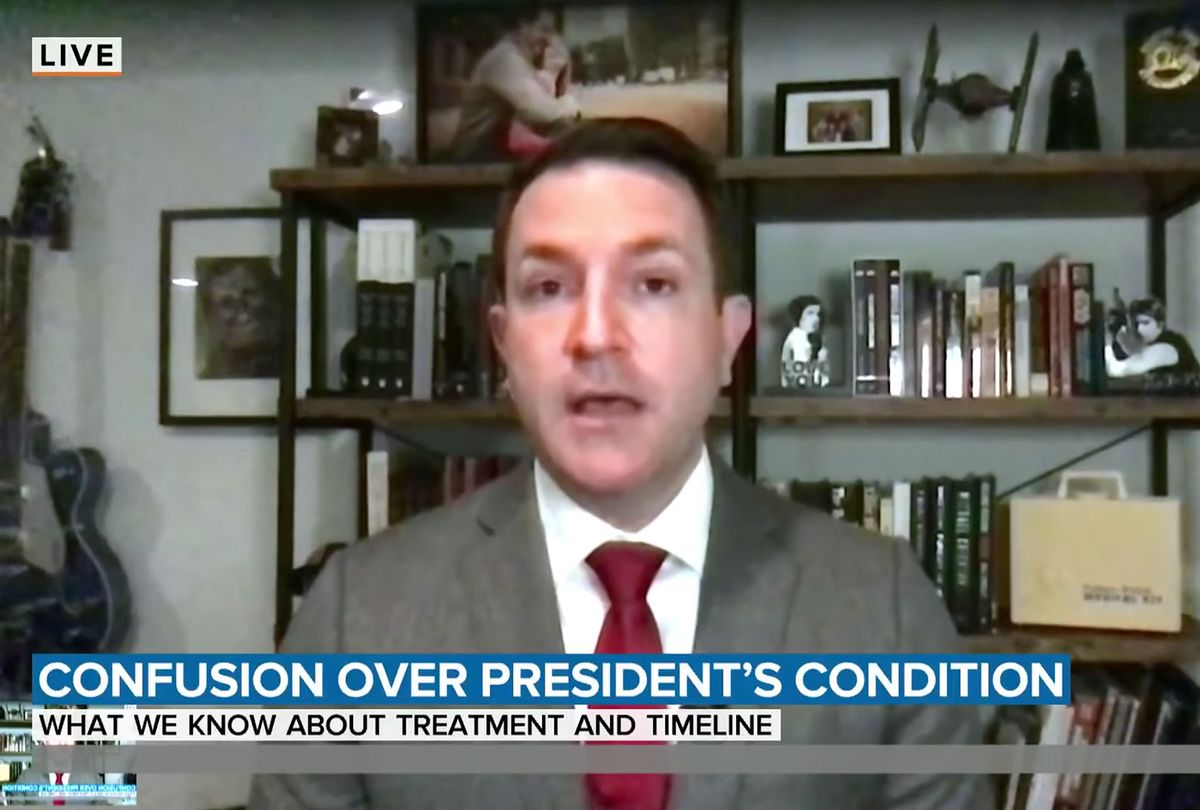 An emergency room physician at Walter Reed Medical Center said he has no regrets after being ousted from his position following his public criticism of President Donald Trump's bizarre joyride while hospitalized with the coronavirus.

Dr. James Phillips, who worked at Walter Reed during Trump's hospitalization at the medical center in October, slammed the president for driving in a car with Secret Service agents to greet supporters while he was sick.

"Every single person...in the vehicle during that completely unnecessary Presidential 'drive-by' just now has to be quarantined for 14 days. They might get sick. They may die. For political theater," Phillips tweeted in October before removing the post. "Commanded by Trump to put their lives at risk for theater. This is insanity."

"That Presidential SUV is not only bulletproof, but hermetically sealed against chemical attack," he added in another tweet. "The risk of COVID19 transmission inside is as high as it gets outside of medical procedures. The irresponsibility is astounding. My thoughts are with the Secret Service forced to play."

He later upped his criticism in an interview with NBC News, arguing that the president sent a message to "people who are sick that it's okay to go out."

"The reality is that this was a dangerous move," he said. "There is no medical benefit for this to have taken place. It violates CDC guidelines that come from the president's own administration."

Phillips, the chief of disaster medicine at George Washington University Hospital, was removed from Walter Reed's schedule beginning in January earlier this month, according to CBS News.

On Sunday, Phillips seemed to suggest his ouster was politically motivated.

"Today, I worked my final shift at Walter Reed ER," he tweeted. "I will miss the patients and my military and civilian coworkers - they have been overwhelmingly supportive. I'm honored to have worked there and I look forward to new opportunities. I stand by my words, and I regret nothing."

Officials at Walter Reed told CBS News that the hospital did not make the decision to remove Phillips from the schedule and said it "provides requirements for contract positions" and "schedules are determined by the contractor."

Phillips' contractor, GW Medical Faculty Associates, did not say whether it removed him from the Walter Reed schedule.

"While we cannot comment on the scheduling assignments of our providers, we can confirm that he continues to be employed at the GW Medical Faculty Associates," Lisa Anderson, a spokesperson for GW School of Medicine, told the outlet, adding that Phillips remains on staff at the university's DC hospital.

Phillips' colleagues told CBS they were "surprised" that Walter Reed would remove a disaster medicine expert amid rising coronavirus infections.

Phillips' removal came about a month after Trump lost the election to President-elect Joe Biden.

Trump defended his joyride, arguing that he wore a mask during the drive and the Secret Service agents were "very heavily protected."

But the stunt drew heavy criticism from Secret Service agents.

"He's not even pretending to care now," one agent told The Washington Post at the time.

"Where are the adults?" another wondered.

Phillips was far from the only doctor to criticize the episode, though he appears to be the only Walter Reed doctor to do so publicly.

"By taking a joy ride outside Walter Reed the president is placing his Secret Service detail at grave risk," Jonathan Reiner, Phillips' colleague at GW Hospital, said at the time. "This is the height of irresponsibility."

Trump bragged after his hospitalization that his infection had made him an expert on the disease.

"It's been a very interesting journey, I learned a lot about COVID," he said in a video in October. "I get it, and I understand it."

Despite his own experience being hospitalized with the virus, Trump continued to disregard medical guidelines on masks and public gatherings and left the pandemic response up to individual states. More than 330,000 people have died from the coronavirus in the United States. Dr. Anthony Fauci, the director of the National Institute of Allergy and Infectious Diseases, said that the "politicization" of masks and social distancing have hampered the pandemic response but Trump's decision to leave key decisions to individual states resulted in the US becoming the "hardest-hit country in the world."

"The states are very often given a considerable amount of leeway in doing things the way they want to do it, as opposed to in response to federal mandates, which are, relatively, rarely given," Fauci said in a radio interview over the weekend. "What we've had was a considerable disparity with states doing things differently in a nonconsistent way. There have been a lot of factors that have led to the fact that, unfortunately for us, the United States has been the hardest-hit country in the world, but I believe that disparity among how states do things has been a major weakness in our response."