New year, higher minimum wages in 24 states and 50 municipalities thanks to Fight for $15

"Despite the pandemic, the Fight for $15 movement continues to gain strength" 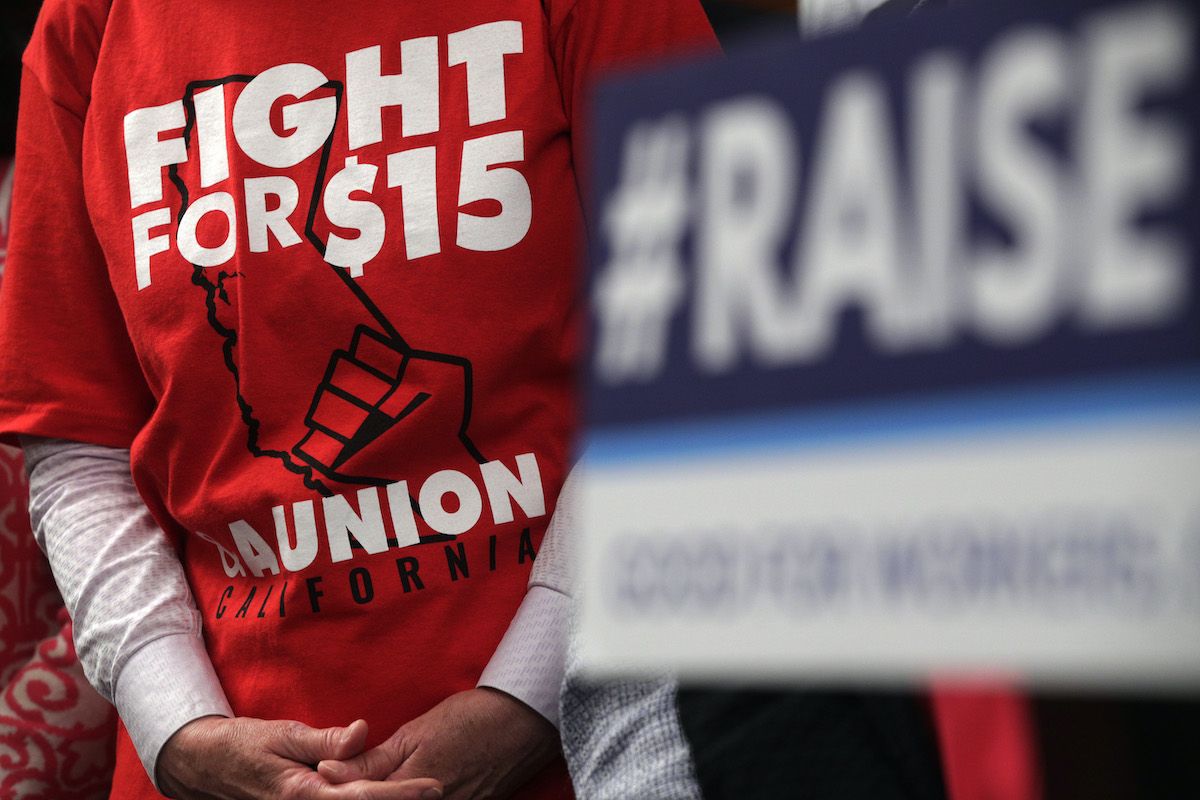 2020 was a devastating year for underpaid frontline workers.

But even in the face of public health and economic crises triggered by Covid-19, the Fight for $15 movement persisted, and now 24 states and 50 municipalities throughout the U.S. are set to raise minimum wages in 2021.

On New Year's Day, 20 states and 32 cities will increase their minimum wage, with the wage floor in 27 of those jurisdictions reaching or exceeding $15 per hour. The January 1 raises will be followed by another round of wage floor hikes later in 2021, when four additional states and 18 localities will increase their minimum wage, 13 of them to at least $15 per hour.

That's according to a new report, Raises From Coast to Coast in 2021 (pdf), released Thursday by the National Employment Law Project (NELP), which monitors worker remuneration and advocates for higher minimum wages nationwide.

"Despite the pandemic, the Fight for $15 movement continues to gain strength, with more cities and states than ever before raising their wage floors, including dozens of local jurisdictions raising wages to $15 or more," said Yannet Lathrop, senior researcher and policy analyst with NELP and author of the report.

Since 2012, when fast-food workers at a McDonald's in New York City launched the first Fight for $15 and a Union protest and strike, "the movement to raise wages has gained major traction, amassing a series of victories that have yielded more than $68 billion in raises for workers nationwide," according to NELP. "These raises are the result of years of advocacy by frontline workers, who fought for and won these wage increases by going on strikes, organizing their coworkers and communities, and demanding to be heard by their elected officials."

"These increases are a testament to the power of workers coming together and fighting for what real people and families need," said Lathrop. She added that while "the victories this movement has amassed are mounmental... the work of winning higher wages is far from over."

Twenty states remain "stuck at the federal floor of $7.25 per hour—with state legislators who refuse to hear their constituents' pleas," Lathrop said. "Meanwhile, Congress has refused to raise the federal minimum wage for more than 10 years."

Lathrop told USA Today that "all workers should be able to make ends meet. They're not earning enough, especially when they're exposing themselves to a deadly virus," as frontline employees in healthcare, food service, and other essential industries have been doing for months.

All low-income workers benefit from minimum wage increases, and workers of color, who are overrepresented in poorly paid jobs, benefit disproportionately, noted NELP.

The worker advocacy organization explained how "occupational segregation" has contributed to the racialization of inequality, evident throughout the coronavirus crisis. "Black and brown workers, who continue to face systemic barriers to higher-paying occupations" have historically been pushed "into the lowest-paying jobs with the least protections," and these labor market dynamics have worsened "yawning wage and wealth gaps."

Along the same lines, political scientist Adolph Reed, Jr. has also written that in a society characterized by the intensifying concentration of economic power at the top, policies that redistribute income downward can contribute most effectively to reducing wealth inequality across the board, which "not only would benefit all working- and middle-class Americans but also would be especially beneficial to African Americans hoping at long last to overcome the economic legacies of discrimination."

Lathrop, in her statement, noted that "as the cost of living and inequality continue to rise, it's become clear that the wage floor needs to move above $15. Policymakers at the state and local levels can respond by adopting wage floors that move beyond a bare minimum and come closer to a living wage."

Despite strong opposition from business groups, workers in dozens of cities, counties, and states will benefit from higher wages beginning Friday. While states like Florida are on pace to reach a $15 minimum wage by 2026, NELP is advocating for action to be taken at the national level.

"We call on the incoming Biden-Harris administration and Congress to really listen and respond to workers' demands," Lathrop concluded. "We are counting on Biden-Harris to deliver a just recovery from this Covid crisis—including finally passing a federal wage floor of $15 or higher."