Amid surging worldwide poverty, planet's 500 wealthiest got $1.8 trillion richer in 2020

Around the world and in the U.S., the gap between rich and poor got dramatically worse in the year of the pandemic 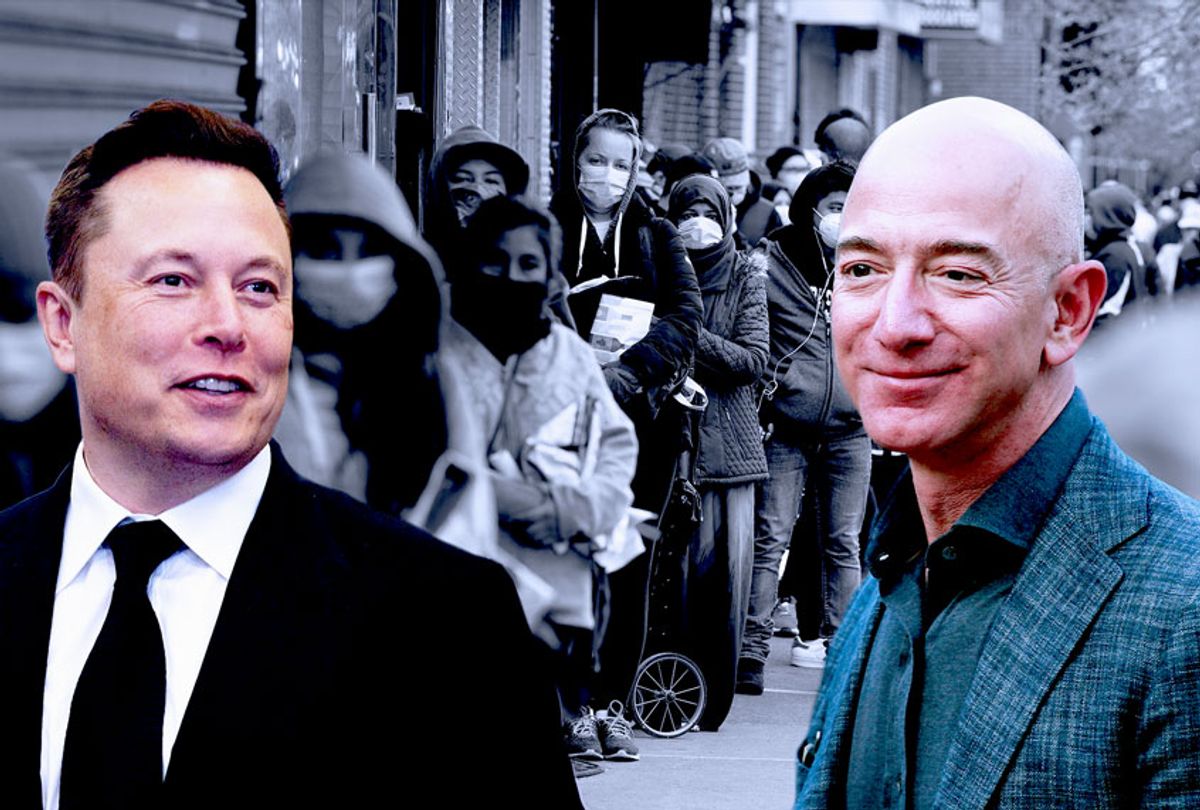 Some billionaires having a good time, and the common folk affected by the pandemic (Getty Images/Salon)
--

Bloomberg's year-end report on the wealth of the world's billionaires shows that the richest 500 people on the planet added $1.8 trillion to their combined wealth in 2020, accumulating a total net worth of $7.6 trillion.

The Bloomberg Billionaires Index recorded its largest annual gain in the list's history last year, with a 31% increase in the wealth of the richest people.

The historic hoarding of wealth came as the world confronted the coronavirus pandemic and its corresponding economic crisis, which the United Nations last month warned is a "tipping point" set to send more than 207 million additional people into extreme poverty in the next decade — bringing the number of people living in extreme poverty to one billion by 2030.

Even in the richest country in the world, the United States, the rapidly widening gap between the richest and poorest people grew especially stark in 2020.

As Dan Price, an entrepreneur and advocate for fair wages, tweeted, the 500 richest people in the world amassed as much wealth in 2020 as "the poorest 165 million Americans have earned in their entire lives."

Nine of the top 10 richest people in the world live in the United States and own more than $1.5 trillion. Meanwhile, with more than half of U.S. adults living in households that lost income due to the pandemic, nearly 26 million Americans reported having insufficient food and other groceries in November — contributing to a rise in shoplifting of essential goods, including diapers and baby formula. About 12 million renters were expected to owe nearly $6,000 in back rent after the new year.

Tesla CEO Elon Musk enjoyed a historic growth in wealth last year, becoming the second richest person in the world and knocking Microsoft co-founder Bill Gates down to third place. Musk's total net worth grew by $142 billion in 2020, to $170 billion — the fastest creation of personal wealth in history, according to Bloomberg.

Amazon founder Jeff Bezos is at the top of the list, with a net worth of $190 billion. Bezos added more than $75 billion to his wealth in 2020, as the public grew dependent on online shopping due to COVID-19 restrictions and concern for public health.

While Bezos and a select few others in the U.S. have amassed historic gains in personal wealth in the last year, the federal government has yet to extend much in the way of meaningful assistance to struggling Americans. The Republican-led Senate on Friday continued to stonewall a vote on legislation that would send $2,000 checks to many American households.

Senate Majority Leader Mitch McConnell denounced the proposal as "socialism for rich people" even though the plan includes a phaseout structure and only individuals making up to $115,000 per year — not those in the highest tax brackets — would receive checks.

"Surging billionaire wealth hits a painful nerve for the millions of people who have lost loved ones and experienced declines in their health, wealth, and livelihoods," Chuck Collins, director of the Program on Inequality and the Common Good at the Institute for Policy Studies, told Bloomberg this week. "Worse, it undermines any sense that we are 'in this together' — the solidarity required to weather the difficult months ahead."