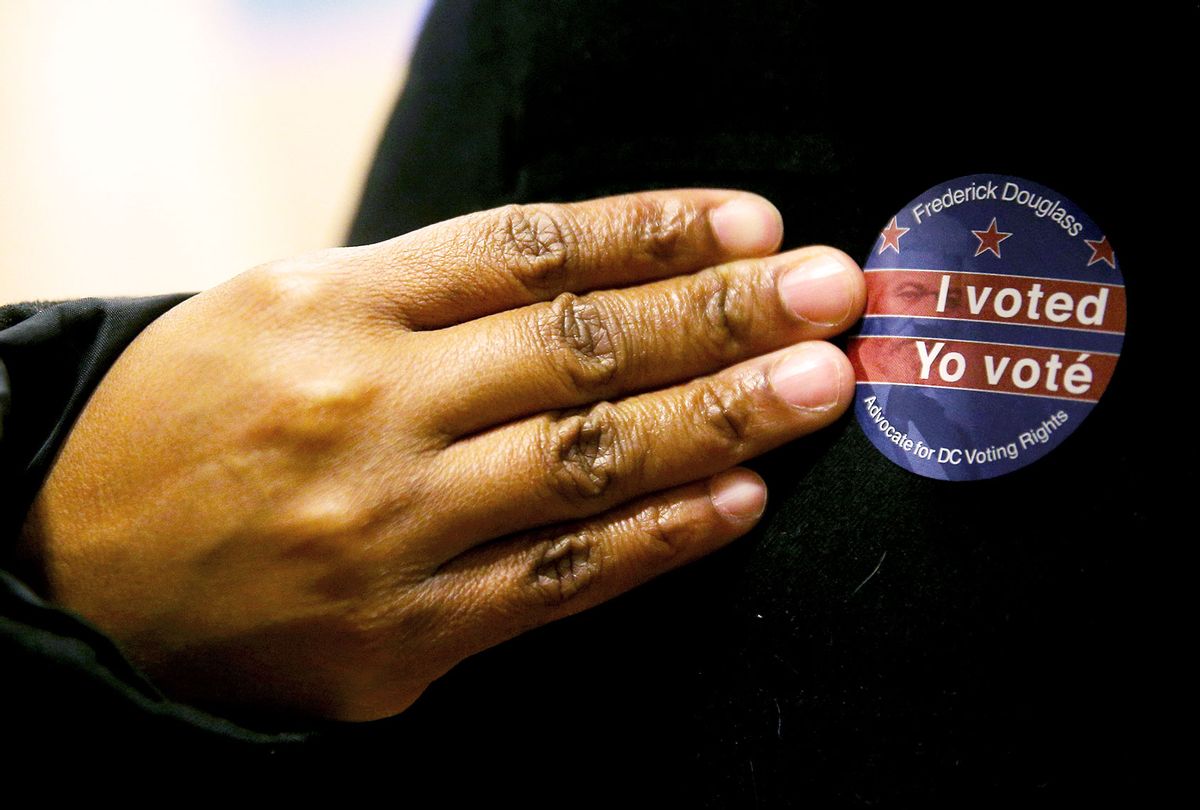 A voter wears a bilingual I voted sticker at the University of the District of Columbia (UDC) during early voting in the 2020 US presidential election. (Yegor Aleyev\TASS via Getty Images)
--

The voting patterns of religious groups in the U.S. have been scrutinized since the presidential election for evidence of shifting allegiances among the faithful. Many have wondered if a boost in Catholic support was behind Biden's win or if a dip in support among evangelicals helped doom Trump.

But much less attention has been paid to one of the largest growing demographics among the U.S. electorate, one that has increased from around 5% of Americans to over 23% in the last 50 years: "Nones" — that is, the nonreligious.

I am a scholar of secularism in the U.S., and my focus is on the social and cultural presence of secular people — nonreligious people such as atheists, agnostics, humanists, freethinkers and those who simply don't identify with any religion. They are an increasingly significant presence in American society, one which inevitably spills into the political arena.

In this last election, the emerging influence of secular voters was felt not only at the presidential level, but also on many down-ballot issues.

For years, both scholars and pundits have referred to the political impact of "values voters" in America. What that designation generally refers to are religious men and women whose scripturally based values coagulate around issues such as opposing marriage equality and women's reproductive autonomy.

But dubbing such religious voters as "values voters" is a real semantic bamboozle. While it is true that many religious Americans maintain certain values that motivate their voting behavior, it is also very much the case that secular Americans also maintain their own strongly held values. My research suggests they vote on these values with just as much motivation as the religious.

This played out in November in a number of ballot initiatives that have flown under the national media radar.

Voters in Washington state, for example, passed Referendum 90, which requires that students receive sex education in all public schools. This was the first time that such a measure was ever on a state ballot, and it passed with ease — thanks, in part, to the significant number of nonreligious voters in the Pacific Northwest.

The fact is, Washington is one of the least religious states in the union. Well over a third of all Washingtonians do not affiliate with any religion, more than a third never pray and almost 40% never attend religious services.

The referendum's passing was helped by the fact that nonreligious adults tend to value comprehensive sex education. Numerous studies have found that secular Americans are significantly more likely to support comprehensive sex education in school. In his research, sociologist Mark Regnerus found that secular parents were generally much more comfortable — and more likely — to have open and frank conversations with their children about safe sex than religious parents.

Meanwhile, voters in Oregon — another Pacific Northwestern state that contains one of the most secular populations in the country — passed Measure 110, the first ever statewide law to decriminalize the possession and personal use of drugs.

This aligns with research showing that nonreligious Americans are much more likely to support the decriminalization of drugs than their religious peers. For instance, a 2016 study from Christian polling firm Barna found that 66% of evangelicals believe that all drugs should be illegal as did 43% of other Christians, but only 17% of Americans with no religious faith held such a view.

Science at the ballot box

Secular people are generally more trusting of scientific empiricism, and various studies have shown that the nonreligious are more likely to accept the evidence behind human-generated climate change. This translates to support for politicians and policies that take climate change seriously.

It may also have factored in to the success of a November ballot measure in Denver, Colorado, to fund programs that eliminate greenhouse gases, fight air pollution and actively adapt to climate change. The ballot passed with over 62% of the vote — and it is of note that Denver is one of the most secular cities in the nation.

Meanwhile voters in California — another area of relative secularity — passed Proposition 14 supporting the funding of stem cell research, the state being one of only a handful that has a publicly funded program. Pew studies have repeatedly found that secular Americans are far more likely than religious Americans to support stem cell research.

On issues that the religious right has held some sway in recent years, there is evidence of a counterbalance among secular "value voters."

For example, while the religious have been more likely to oppose same-sex marriage, secular Americans are more likely to support it, and by significant margins. A recent Pew study found that 79% of secular Americans are supportive, compared to 66% of white mainline Protestants, 61% of Catholics, 44% of Black Protestants and 29% of white evangelicals.

There are many additional values that are prominent among secular Americans. For example, the U.S. Secular Survey of 2020 — the largest survey of nonreligious Americans ever conducted, with nearly 34,000 participants — found strong support for safeguarding the separation of church and state.

Other studies have found that secular Americans strongly support women's reproductive rights, women working in the paid labor force, the DACA program, death with dignity and opposition to the death penalty.

According to Eastern Illinois University professor Ryan Burge's data analysis, around 80% of atheists and agnostics and 70% of those who described their religion as "nothing in particular" voted for Biden.

This may have been decisive. As Professor Burge argues, "it's completely fair to say that these shifts generated a two percentage-point swing for Biden nationwide. There were five states where the gap between the candidates was less than two percentage points (Georgia, Arizona, Wisconsin, Pennsylvania and North Carolina). Four of those five went for the Biden — and the nones were between 28% and 37% of the population in those key states."

As this past election has shown, secular values are not only alive and well, but they are more pronounced than ever. It is also noteworthy that more openly nonreligious candidates were elected to public office than ever before. According to an analysis by the atheist author and activist Hemant Mehta, not only did every member of the secular Congressional Freethought Caucus win reelection, but 10 state senators who are openly secular — that is, they have made it publicly known that they are nonreligious — were voted into office, up from seven two years ago. There is now an all-time high of 45 openly secular state representatives nationwide, according to Mehta's analysis. Every one of them is a Democrat.

Religious voters will certainly continue to vote their values — and for politicians that express similar views. But so, I argue, will secular voters.

Phil Zuckerman is a professor of sociology and secular studies at Pitzer College and author of "What It Means to Be Moral."