Trump's Georgia call was no idle threat: He is trying to overturn the election

Why bother calling Brad Raffensperger if he doesn't really believe he can coerce him to deliver those 11,000 votes? 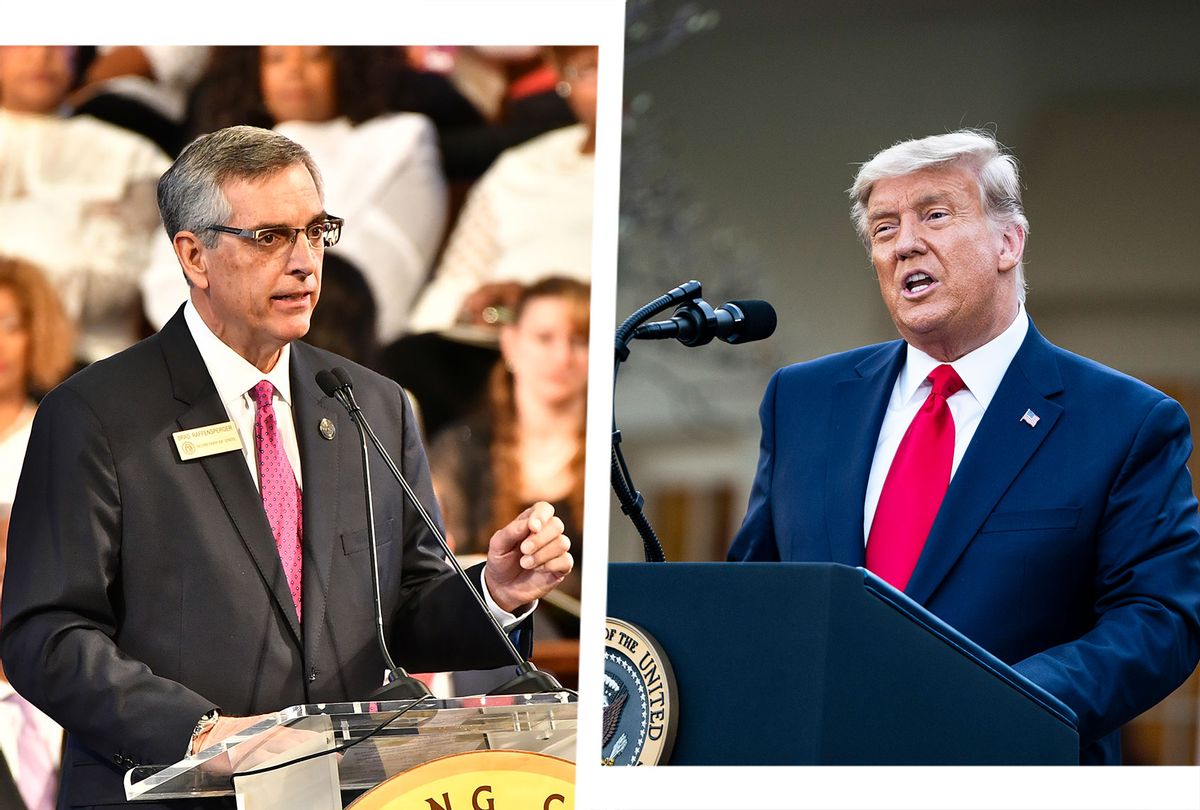 President Donald Trump, like Richard Nixon before him, has gotten himself into the biggest trouble of his presidency because of his big mouth. Nixon was ultimately driven from office because he was caught on tape ordering his henchmen to commit crimes. Trump was impeached — less than a year ago — over a phone call he made to Ukrainian President Volodymyr Zelensky in which he tried to convince him to publicly announce a bogus corruption investigation into political rival Joe Biden and threatened to hold up vital military aid unless Zelensky did his bidding.

Trump himself released the transcript of that call, for reasons I don't think has ever been clearly understood, but it revealed that he wields his power like a gangster. On Sunday, we obtained more proof of that approach when the Washington Post published a taped conversation from over the weekend between Georgia Secretary of State Brad Raffensperger and the president in which Trump cajoled, wheedled, prodded and threatened Raffensperger, trying to get him to overturn the election results in the state.

The tape is disturbing, to say the least. Trump rambles on about conspiracy theories that NBC's Ben Collins, whose beat is right-wing extremist movements, explained derived from "the QAnon social media pipeline":

Raffensperger apparently released the tape after Trump took to Twitter to announce that they'd spoken and complain that the Georgia Republican "has no clue!" about the various election fraud fantasies Trump was pushing. The tape shows that Raffensperger and his lawyer, Ryan Germany, knew all about them and said they had already investigated to find that none of them are true.

Whether Trump actually believes any of this unknown and irrelevant. What is relevant is that he made it very clear what he wants from Raffensperger and he threatened him:

... it is more illegal for you than it is for them because, you know, what they did and you're not reporting it. That's a criminal, that's a criminal offense. And you can't let that happen. That's a big risk to you and to Ryan, your lawyer. And that's a big risk. But they are shredding ballots, in my opinion, based on what I've heard. And they are removing machinery, and they're moving it as fast as they can, both of which are criminal finds. And you can't let it happen, and you are letting it happen. You know, I mean, I'm notifying you that you're letting it happen.

So look. All I want to do is this. I just want to find 11,780 votes, which is one more than we have because we won the state.

Trump brings up the 11,000 votes over and over again during the conversation, finally ending with this:

This is the way a movie mob boss issues a threat.

It's unclear exactly how Trump thinks this is going to result in the election being overturned but we have to assume that he is seriously trying to do that. After all, it's so late in the game that if he were simply trying to craft a narrative that he can use for his ongoing grift, there would be no need to have private calls with Georgia politicians. He could just rant on Twitter and give interviews and send out fundraising emails whining about how they stole the election. Why even bother talking to Raffensperger if he doesn't really believe he can coerce him to deliver those 11,000 votes?

As Collins reported, the conspiracy theories are just tumbling out one after the other without any real sense of how this grand conspiracy is supposed to have worked. But since even Trump knows that if Raffensperger was willing and able to do his bidding (and the electors hadn't already voted) it still wouldn't be enough to change the electoral college results in his favor, one has to assume he's having similar talks with Republicans in other states as well.

He's certainly been talking to members of the House and Senate and he's got a number of them ready to object to certifying the electoral college results on Wednesday. But, why not? Trump has told his followers to descend on D.C. that day promising that it will be "wild." As many as 140 GOP Representatives are said to planning to object, along with around a dozen Republican Senators, which means that they plan to turn this pro-forma congressional ritual into a circus sideshow. Senator Josh Hawley, R-Mo, was the first to jump in and offer to object in the Senate based upon the idea that because so many people have been convinced the election was stolen, they need to actually steal it in order to restore people's faith in democracy. Unfortunately for Hawley, he was quickly shoved aside by Ted Cruz, R-Tx, who gathered a handful of servile accomplices to join in the fun and came up with a truly odious plan:

FYI: this election is nothing like the "dispute" of 1876, thank goodness, which was predicated on terrorist violence against Black people and ended up sanctioning Jim Crow. It's outrageous that Cruz would even bring this up but considering that Trump's main conspiracy theory seems to be based upon the idea that the election was supposedly stolen from him in cities with large Black populations — but maybe it isn't all that surprising.

And if that doesn't work, it sounds as if Trump may think he has a fallback:

Oddly enough, White House advisor Peter Navarro is wrong and Judge Jeanine Pirro is right. The inauguration date is in the Constitution and if Biden is somehow not sworn in, Nancy Pelosi would simply become the acting president. Of course, Trump is the man who insisted publicly many times that he should be able to serve more than two terms and suggested that we delay the election until conditions were more favorable for him. Adherence to the Constitution isn't something he and his collaborators have ever been particularly concerned with.

Luckily, there are enough congressional representatives and senators on record saying they will vote to certify the results on Wednesday so unless Trump really does refuse to vacate the White House, it's going to be over on that day. But Trump is fomenting tremendous anger among his followers that may very well boil over. What happens then is anybody's guess. But you can be sure that if Trump is as steeped in right-wing conspiracy theories as deeply as it appears he is, he's well aware of the danger. One can't help but suspect he sees that as a feature, not a bug.