"There's no such thing as a full-time COVID-19 vaccinator": Mass vaccination snafus, explained 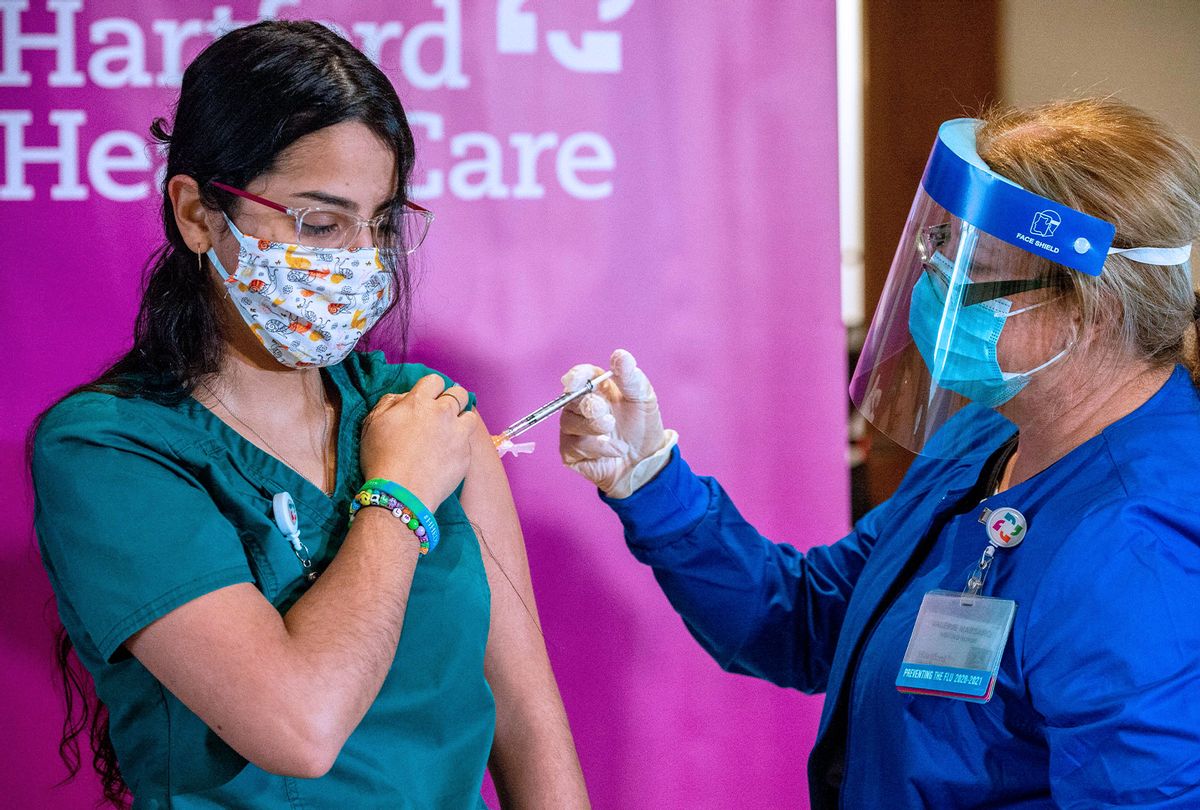 Medical worker Jasmine Ortiz is given the the second dose of the Pfizer/BioNTech vaccine twenty-one days after receiving the first shot from RN Valerie Massaro of Hartford HealthCare, at the Hartford Convention Center in Hartford, Connecticut on January 4, 2021. (JOSEPH PREZIOSO/AFP via Getty Images)
--

When the U.S. the Food and Drug Administration (FDA) approved emergency use of the Pfizer/BioNTech vaccine in mid-December, officials touted a goal-oriented roll-out. By the end of December, 25 million doses of the vaccine would supposedly be available in America— just enough to cover the estimated 21 million health care personnel, and 3 million long-term care residents across the country, cohorts part prioritized to receive the vaccine first. A few days later, the FDA approved the Moderna vaccine, which was expected to increase the number of vaccine doses available to frontline workers in healthcare settings.

But according to the Centers for Disease Control and Prevention, as of January 4, 2021, only a little over 4.5 million Americans have received either the Moderna and Pfizer BioNTech COVID-19 vaccines, and only 15.4 million doses have been distributed across the country. Both the supply and vaccination goals are falling behind. Why?

"Healthcare settings have to deal with the fact that they're taking care of coronavirus patients at the same time that they're running vaccination clinics," said Amesh Adalja, a senior scholar at Johns Hopkins Center for Health Security, in an interview. "People who are vaccinating have other positions and they're being pulled, there's no such thing as a full-time COVID-19 vaccinator."

Hospitals have already been under a significant amount of pressure with dwindling staff and resources as coronavirus cases surge across the country. Asking them to orchestrate the task of vaccinating all of the staff, while taking care of patients during a coronavirus surge and the holidays, is no easy feat. Then there are the complicated logistics of administering the vaccine itself.

As Salon previously reported, many hospitals are only alerting healthcare workers that they can receive the vaccine a day or two before they schedule the inoculation. That short timeline relates to how the vaccine is stored. For example, the Pfizer vaccine has a short shelf life of just five days after being transferred from ultracold storage to a refrigerator, because of its mRNa (synthetic messenger RNA) content. The Moderna vaccine is more hardy; it can be kept at -20°C and can remain stable for up to one month at consumer refrigerator temperatures. The Pfizer vaccine needs to be kept in a freezer at -70°C. Once a person is vaccinated, they have to be monitored for 15 minutes in the rare case of an allergic reaction. The COVID-19 vaccines currently aren't administered as quickly as a flu vaccine.

Adalja told Salon the pace of the vaccine roll-out doesn't come as a surprise.

"Many of us knew that to accomplish a task of rolling out a vaccine, in the middle of a pandemic to basically the entire country, was going to be something that was going to have hiccups and unanticipated lags. That's why it was so important to make sure that there was a plan in place with federal support of states to actually turn vaccines into vaccinations," Adalja said. "So much of this is not surprising to me, and the fact that it's getting attention hopefully we'll start to remedy this issue."

But it is "concerning."

"The only way that we end this pandemic is through vaccination, and the fact that states are having difficulty turning vaccines into vaccination speaks to the need for more resources to be able to support this vaccination program," Adaljda said. "And the longer it takes us to get to the herd immunity threshold, the longer it takes us to vaccinate vulnerable populations, the more this public health emergency will fester."

The various reports of hospitals vaccination plans going awry are alarming— and the challenges aren't only a result of lack of staffing and resources. According to a report in The Texas Tribune, so many healthcare workers at a hospital declined the vaccine that doses were offered to nearby medical workers outside. A separate report in the New York Times surfaced stories of doses being thrown out because of poor planning or how prioritization in some hospitals embodied an "every man for himself" attitude. According to the Los Angeles Times, a Disney worker received the Pfizer vaccine because she was reportedly a relative of a hospital worker.

In a CNN op-ed, Kent Sepkowitz argued that the vaccine roll-out isn't a "disaster," and that Americans can expect it to get better under a President-elect Joe Biden's administration.

"Given both the intrinsic difficulties of choreographing a national program ASAP and the clear lack of urgency from the White House, it is safe to assume that a better program simply won't happen during President Trump's leadership," Sepkowitz wrote.  "But there is every reason to think that the Biden administration will increase the pace and address all the contingencies efficiently and without politics."

Some states and cities are taking matters into their own hands. On Monday, New York Governor Andrew Cuomo said hospitals could face fines up to $100,000 if they don't use their current supplies of vaccines by the end of the week.

"We want those vaccines in peoples' arms," Cuomo said.

Adalja told Salon he believes there needs to be "more resources and more staffing being dedicated to hospitals," in order for the vaccine roll-out to ramp up, which will be needed when the country moves to the next phase of vaccinations, extending to non-healthcare and long-term care facility workers and residents.

"Phase One is the easiest part of vaccination, because these are all people that are kind of captive audiences, they either work in hospitals or live or work nursing homes, it's going to get much harder when we move into the community," Adalja said. "And if we can't do this very well, it doesn't speak well for what we're going to do when we have to vaccinate people in the community."