Hands across the water: Catherine Flowers' quest to drain the septic swamp 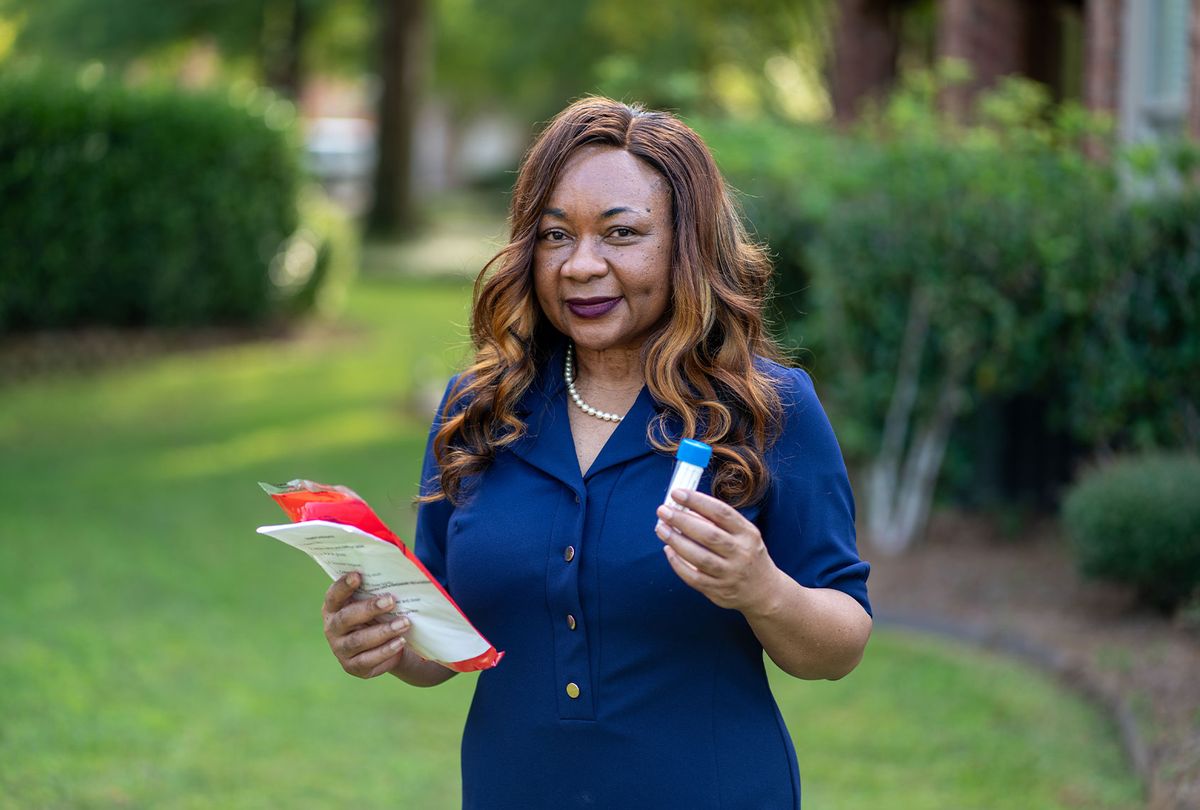 Catherine Coleman Flowers, activist, author and MacArthur "genius grant"  recipient, was born in Birmingham, Alabama, and spent some of her childhood in Montgomery. But mostly, she grew up in rural Lowndes County, where, she has written, "Indoor plumbing was a luxury," and children walked long distances to pump water from a well – water "that was so fresh and delicious" the effort seemed worth it.

Many years later, after she'd spent time in Atlanta as an intern at the Martin Luther King Jr. Center for Nonviolent Social Change, taught high school for underperforming students in Detroit and served in the Air Force, a neighbor approached her at a community event and asked her to come home to Lowndes County. There she found in her childhood community a sanitation infrastructure so broken that raw sewage emptied into backyards and septic tanks backed up against the superhydrated clay soil of the Black Belt region of Alabama: the same soil that made the South so rich growing cotton.

Worse, some of those residents were being held criminally responsible for their broken sewage systems, which they lacked both the power and wealth to fix.

In 2009, after her legs were ravaged by mosquitoes swarming around a pool of raw sewage, she broke out in an unidentifiable rash and in 2012 enlisted the help of Dr. Peter Hotez of the National School of Tropical Medicine at the Baylor College of Medicine in Houston. Five years later, Hotez and his team found, in a peer-reviewed study, that more than 30% of Lowndes County residents carried hookworm, a disease of the tropics long considered eradicated from the U.S.

Flowers' new book "Waste: One Woman's Fight Against America's Dirty Secret" documents, in patient, straightforward and clarifying prose, how she came to be known as the "Erin Brockovich of sewage." It's a title she wholeheartedly embraces.

Judith Lewis Mernit: First, congratulations on the book. I've been calling it an "outward-facing memoir," because it's about your life and how you came to the work you do, but it's also populated with so many figures from the civil rights and environmental justice movements, from Stokely Carmichael to Jane Fonda. It's almost like a who's who. It made me realize how connected these movements are across time.

Catherine Coleman Flowers: That's one of the things I wanted people to come away with after reading the book. That kind of understanding.

It's also great timing for the book, because we're at this point now where we all want to do something right. For the country, for the planet – everything. So much damage has been done over the last four years, and we want to set that right. Your book shows how we can.

It's also about why it's important right now for us to find some common ground. I haven't talked about [sewage] as a Democrat or a Republican; I've talked about it as an environmental issue that impacts all of us.

That bipartisanship comes through pretty clearly. Democratic Sens. Elizabeth Warren and Doug Jones both had trouble grasping what you were trying to tell them about rural poverty and sewage. Then-Sen. Jeff Sessions, though, the Alabama Republican, got it right away. Is breaking down that partisan split something you think about?

Rural issues seem to transcend a lot of boundaries. You've talked about the issues facing people in Appalachia being similar to what people in Alabama go through.

Lowndes County is not the only community with wastewater problems. One of the persons I've talked to is Nina McCoy, from Martin County, Kentucky. Nina and her husband are activists on water and sanitation there. There's a lot of commonality.

There are also just some things that people from rural communities understand that [urban] people don't. Oftentimes when people call to ask me a question, people would ask me, "Where are you from?" And I'd say,  "Lowndes County." And they'd say, "No, I mean what town are you from." The assumption is that everybody's from a town.

That's true in Kentucky, too. When I was there reporting last winter everyone identified themselves as from Bell County or Harlan County or Breathitt County. There was always that county identification over any town or city.

That's because in rural communities, a lot of places where people live are unincorporated. A lot of folks don't even understand what an unincorporated area is. A lot of those people who don't understand are making policy, and it's one of the reasons rural people get left out.

There's a place in your book where Bob Woodson, who's a Black conservative activist, said that rural Alabama's sewage crisis is a failure of the civil rights movement. You disagreed, saying that you consider it a failure of government to address the needs of the rural poor, "another chapter in the long history of the marginalization of poor communities and rural residents." Isn't that sort of another civil rights movement?

When people say, "civil rights," they aren't necessarily talking about an economic system undergirded by inequality. People in their minds have accepted that it's supposed to be okay for folks not to make a living wage, even when they work more than eight hours a day. People have accepted that it's okay for people to go to work every day and have to live in a mobile home, where they can't self-isolate if they get COVID on one of these "essential jobs" that they have to work at.

So that's what I was referring to. I guess it's civil rights, but it's something else, too. At the time I didn't understand as much as I understand it now.

COVID has amplified the disparities and inequalities that exist in this country. Lately what we've seen encouraged by the government is a level of selfishness that's not only jeopardized our economy but also public health. The people that have suffered the most have been those people that have been bearing the burden of inequality for so many years.

You're very good at connecting people to other people and getting them to visit the communities that need their help. A couple of years ago you got Jane Fonda to come to a community meeting in Allensworth, California,  about the drinking water problems there.

It's something I do naturally. I learned from my parents growing up in Lowndes County that we don't hoard resources, which includes friendships and networks. The more people of like minds that come together, the more able we are to bring about change.

I saw a bumper sticker on a car not long ago that said, "The most radical thing you can do is introduce people to one another."

That's a good one. I never really thought about it as being radical. It's something that I've always done. People have told me that others are not so free spirited when it comes to connecting folks, but to me that's what we're supposed to do, especially for those of us who belong to the Christian tradition. That's part of me living my faith. I don't hoard knowledge, and I don't hoard access.

You talk about faith a lot. On the left there's so much suspicion around faith and religion. But in the South, faith is such a huge part of people's motivation in political and environmental work. Your Christian faith is such an important part of what you do.

It's an important part of who I am. My father used to say, "If you make one step God will make two." That's something I always remember,  and it motivates me to do what other people may not do, because they think it's not going to lead to anything. I have faith that if I put in the work, then I'm going to get help from other places to bring about what's necessary. Because, you know, Jesus started out with 12 disciples. And with a lot of opposition! Although if Jesus were to come here today, he probably couldn't come across the Southern border. And if he were coming from an African country, he might be banned and not be able to come at all.

Certain people have, in a political way, propagandized what religion is so that they can make money destroying the Garden of Eden.

That does seem to be what's happened to Christianity.

That is exactly what has happened to Christianity. They have used it inappropriately. I'm a flawed Christian. But one of the things that I hope to be able to demonstrate is that one of the greatest things we can do is love thy neighbor. And I cannot see raw sewage on the ground and not try to do something. As you can see throughout my book, whenever people came to me with adversity, instead of running from it, I have tried to help.

You also in your book talk about Karenna Gore's work, as you put it, "studying the climate crisis through a moral lens." When she founded the Center for Earth Ethics in 2015, she helped broaden the conversation around climate.

One of the things Karenna did at Union Theological Seminary was bring together people like myself with people like her father [former Vice President Al Gore]. She was able to convene people from the spiritual community, not just Christians. There would be people there that were Muslim, that were Jewish, that represented indigenous religions. We all found common ground in our love for Mother Earth.

We shouldn't allow someone else to take [religion] away from us, to make us think that [the environment] is not a natural part of our worship. Water, for an example: For most of us, water is part of most of our spiritual ceremonies in some way. Water is sacred. And we should not allow people to defile and contaminate it.

Water is also at the center of so much activism, so many protest movements. Standing Rock is about water. In Northern California, the Winnemem Wintu are fighting Shasta Dam because of water. And your work, of course, is all about water.

Everybody poops. And if you don't go, you're gonna have a problem!

People don't like to think too much about where their poop goes, though.

In Trevor Noah's autobiography, Born a Crime, he has a whole story about how when he was a little kid in the South African township, he didn't want to poop in the outhouse because of the smell and all the flies and bugs. So he put a piece of newspaper on the kitchen floor, did his business and then wrapped it up and stuck it in the garbage. He talked about how going number two is this sacred moment where you want to be alone, with everything clean around you.

It's interesting that you mentioned South Africa, because I've already been invited to speak in South Africa next year, to talk about the wastewater.

And this is the next step for me – to provide inspiration globally. I want to bring to the table engineers who are visionaries, to design and eventually deploy the type of wastewater systems that can really work and take into account climate change.

I hope that my legacy will be that I have helped to take away the shame of talking about human waste. Because once you bring these issues to the forefront, the problems can be solved.