On Parler, the MAGA social media platform, Trump supporters are ready for insurrection

On the so-called free speech platform, users were abuzz the day after Trump fans breached the Capitol 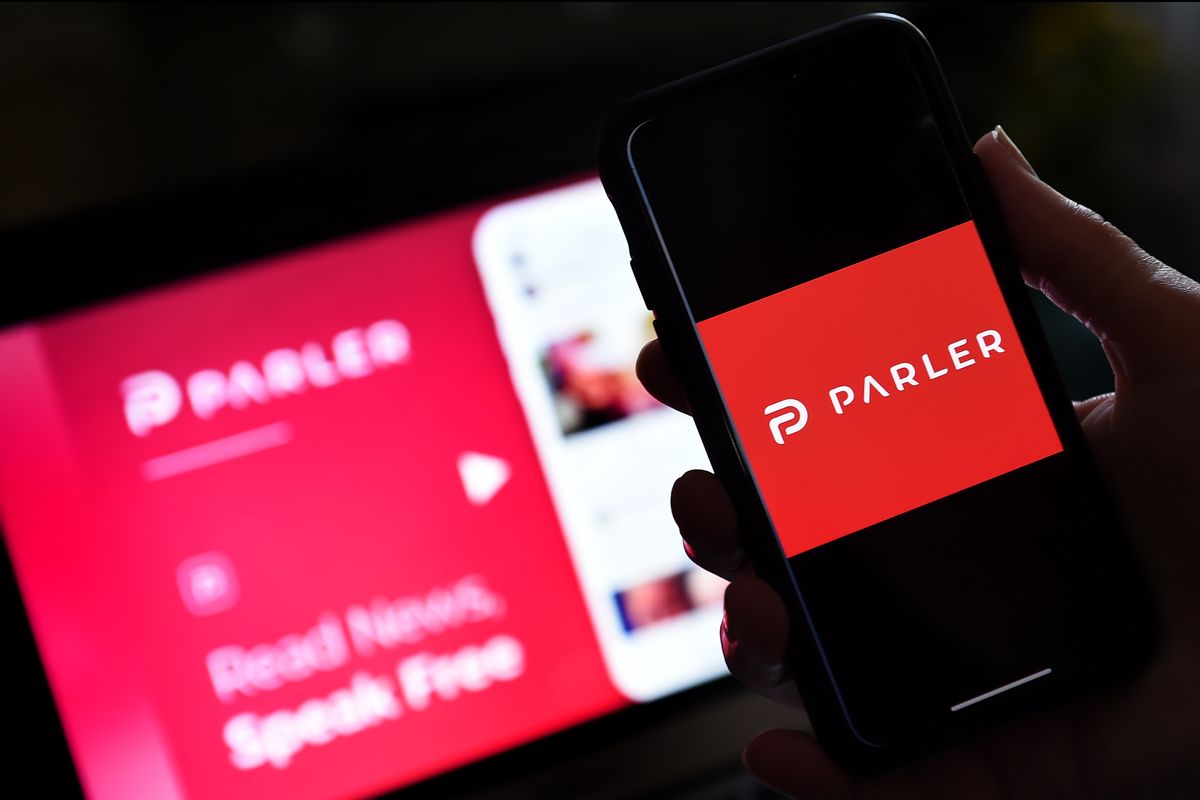 This illustration picture shows social media application logo from Parler displayed on a smartphone with its website in the background. Parler, founded in Nevada in 2018, bills itself as an alternative to "ideological suppression" at other social networks. (OLIVIER DOULIERY/AFP via Getty Images)
--

On Thursday morning, the phrase "#Twexit" — a portmanteau of "Twitter" and "exit" — trended on Parler, the so-called "free speech" social media platform that has become an online hub for Trump supporters and conservatives to meet online.

The site, which visually resembles Twitter or Facebook, became a haven for many pro-Trump types after many of them were banned or blocked from other major social media sites. Whereas posts on Twitter are called tweets, on Parler they are known as "parleys."

The trending hashtag was the unintended consequence of Twitter, Facebook, and YouTube's Wednesday crackdown on Trump himself, who was banned or restricted from posting on most major platforms after some of his supporters broke into the U.S. Capitol and ransacked it, an invasion that resulted in four deaths. In an attempt to calm his supporters who falsely believe the 2020 presidential election was "rigged," Trump posted a video spewing misinformation about the election, and called the people participating in Wednesday's riot "very special."

Grievance politics are key to the ideology of Trump and his supporters — specifically, the notion that they are uniquely sidelined in media, culture and politics and thus must forcefully redress the situation. The "#Twexit" hashtag, which has also trended in the past on Parler, is an ongoing movement that plays into this perception of grievance: Trump supporters believe they are being uniquely targeted and censored by "liberal" social media platforms, when in fact they are violating other social media platforms' rules by spreading misinformation and inciting violence like we saw on Wednesday.

Predictably, Parler was abuzz after yesterday's events, with numerous posts bashing social media CEOs like Twitter's Jack Dorsey and Facebook's Mark Zuckerberg for punishing Trump, in their minds. This morning I spent several hours on Parler wading through Trump supporters' reactions to the riot in the Capitol. The white nationalist group Proud Boys wrote a parley that read: "Mark and Jack get to pick your president now," referencing Zuckerberg's announcement to extend a block on Trump's account for another two weeks. The post had two thousand comments, including some from users advocating for a "new country," inciting and suggesting violence. Some falsely claimed that the United States is now at "war." "Prepare, lock, load and get ready to defend yourself patriots," one user commented. "He should be arrested and hung for treason," another user commented, referring to Zuckerberg.

This all happened in just one post on the Proud Boys' Parler account supporting and furthering false narratives about Wednesday's attack on the Capitol. As the Proud Boys framed the event, people weren't "destroying the capital," they were "liberating it."

Mark and Jack get to pick your president now. Enjoy america.

For the unfamiliar, Parler's platform combines many of the prominent features of both Facebook and Twitter. Users have a newsfeed and can follow influencers, but they can also post themselves. The general Parler timeline contains much of the brand of far-right misinformation that would be slapped with a warning label on either Twitter or Facebook, or be taken down.

Parler was founded in 2018 by two computer programmers named John Matze and Jared Thomson, and is financially backed by Rebekah Mercer, whose father is Robert Mercer, a major funder of Breitbart.

Donald Trump doesn't have an official account on Parler — yet. But many people on the platform were calling for him to start one today. Curiously, many Trump supporters on Parler appeared to be waiting for instructions from Trump, in order to understand "what's next."

Trump's daughter Tiffany Trump took a screenshot of Trump's latest statement given via Dan Scavino on Twitter, and shared it on Parler. Many Parler users commented, asking Tiffany to get her dad on Parler. "WHERE IS YOUR DAD? WHY IS HE NOT ON HERE? HIS PEOPLE NEED TO HEAR FROM HIM!" one user begged. Others told Tiffany they were "praying" for Trump.

The Team Trump account, which is the official account for Trump's re-election campaign, hasn't posted since Trump's video on Wednesday that got removed from mainstream social media accounts. However, many users posted comments to it throughout the day on Thursday expressing their support for Trump. "We love you Trump. Don't concede, fight for us. We want the insurrection act!" one user commented. "Do it and expose the corruption. We will join your army."

This is just a glimpse into high-profile Parler accounts. In the weeds, discussions turn much darker. Many users have referred to Vice President Mike Pence as a "traitor" and expressed interest in Trump "punishing" him "immediately," according to one thread in a group called "Biden Is Not My President."

Some users suggested that members of the media should be "tied" up, and suggested finding their addresses. Many praised Ashli Babbitt, the woman who was shot and killed during the Capitol invasion yesterday, a "freedom fighter." Then, there is the QAnon conspiracy group trying to spread a rumor that Babbitt is not in fact dead.

In scouring Parler, I saw plenty of terrifying, but unsurprising posts. In that sense it was a bit like yesterday's riot — scary, but entirely predictable. Many Parler posts clearly call for violence, though the tone of the rhetoric is aligned with what tech journalists have seen and reported on Parler and similar platforms for months.

On Wednesday night, journalist Kara Swisher interviewed cofounder John Matze, who said content on Parler that could incite violence is put forth to a "community jury."  "Well, for violence, and advocation of violence, or violence specifically, it needs to be a clear and imminent threat," Matze said.

Parler's content also highlights how, despite any kind of attempts at moderation on behalf of Facebook and Twitter, Trump supporters will always find a place to organize and spread misinformation or disinformation.

"If there's anything we've learned in the past four years, it's that the President is who he is and efforts in constraining his behavior and rhetoric are often unsuccessful," said Dustin Carnahan, assistant professor of communication with a focus on political communication, in an emailed statement. "As such, I think we will continue to see more of the same – doubling down on the idea that yesterday's insurrection was a response to a 'stolen' election and blaming outside agitators instead of supporters for the more egregious behavior (e.g. Antifa)."

"This is already happening," Carnahan said. "So long as there is a group of media personalities and political leaders who are willing to echo these falsehoods, this will likely be effective among Trump's base."