Officer Brian Sicknick is the fifth casualty of Wednesday's riot 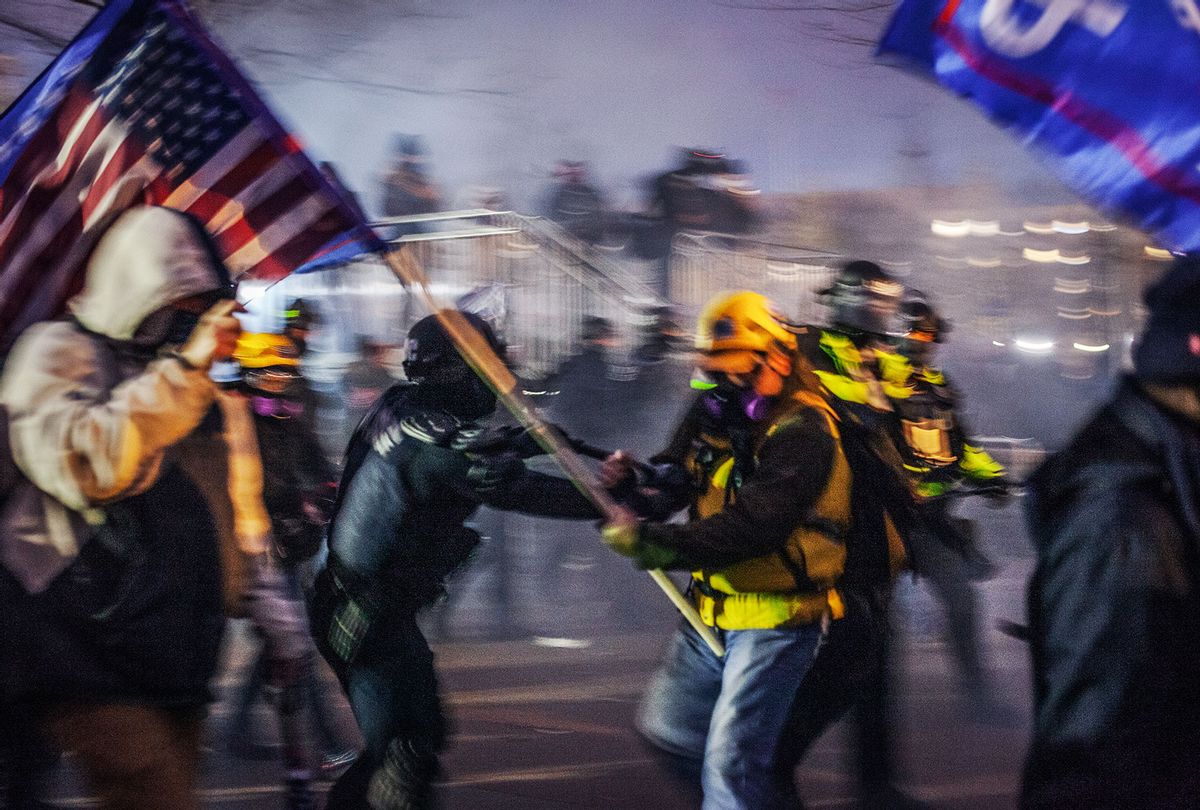 Capitol Police and MPD used physical force and tear gas to force the Trump supporters further away from the U.S Capitol, on January 06, 2021 in Washington, DC. The protesters stormed the historic building, breaking windows and clashing with police. Trump supporters had gathered in the nation's capital today to protest the ratification of President-elect Joe Biden's Electoral College victory over President Trump in the 2020 election. (Shay Horse/NurPhoto via Getty Images)
--

A Capitol Hill police officer died from injuries he sustained after "physically engaging" with the pro-Trump mob that stormed the halls of Congress on Wednesday, officials said, raising the number of deaths from the riot to five.

Officer Brian Sicknick passed away Thursday night from injuries sustained while on-duty, the Capitol Police said in a press release. The officer "was responding to the riots" and "was injured while physically engaging with protesters." Sicknick, who joined the force in 2008, returned to his division office where he collapsed, the statement said. The death is under investigation by the Capitol Police; Washington, D.C., homicide detectives; and federal agencies.

Capitol Police Chief Steven Sund said on Thursday that the rioters attacked officers with "metal pipes, discharged chemical irritants, and took up other weapons against our officers."

"The violent attack on the U.S. Capitol was unlike any I have ever experienced in my 30 years in law enforcement," Sund said in a statement. "These mass riots were not First Amendment activities; they were criminal riotous behavior."

D.C. Police Chief Robert Contee said during a news conference that 56 officers were injured in the riot.

Though there were few arrests at the Capitol on Wednesday, D.C. police arrested 70 people in the unrest and federal prosecutors in Washington filed charges against at least 55 members of the mob on Thursday as investigators continue to search for additional suspects. "We will bring the most maximum charges we can based on the conduct," acting U.S. Attorney Michael Sherwin told reporters on Thursday when asked if he was considering sedition, rioting, and insurrection charges.

It's unclear why Capitol Police were quickly overwhelmed by the rioters. The Pentagon asked the Capitol Police if it needed help ahead of Wednesday's events and the Justice Department reached out to offer FBI support after the crowd already stormed the Capitol, but both offers were denied, according to the Associated Press. President Donald Trump also resisted activating the National Guard after the chaos ensued, according to CNN, and Pentagon leaders placed strict limits on National Guard capabilities to assist with riot control, according to The Washington Post. Maryland Gov. Larry Hogan said Thursday that federal officials repeatedly denied the state's requests to send support. Sund, along with the House and Senate sergeants-at-arms, announced they would resign following widespread condemnation of the riot response.

Sicknick is the fifth person to die in the riot, which came immediately after Trump addressed his supporters at the National Mall and urged them to go to the Capitol. Ashli Babbitt, a 14-year Air Force veteran and an avowed supporter of Trump and the QAnon conspiracy theory, was shot by a Capitol Hill police officer after she smashed a glass pane and tried to breach the House chamber, according to The Washington Post.

D.C. police said that three others died in separate medical emergencies. Kevin Greeson, a 51-year-old Alabama Trump supporter who called for a "war" against Democrats, died of a heart attack amid the chaos, according to the Montgomery Advertiser. Ben Phillips, a 50-year-old Pennsylvania Trump supporter who brought a group of protesters to Washington, died of a stroke during the riot, though there is no indication he participated in the siege, according to the Philadelphia Inquirer.

Rosanne Boyland, a 34-year-old Georgia Trump supporter, was "potentially crushed to death" during the breach at the Capitol, according to a D.C. police spokesman and a friend who was with her.

"I personally feel like the president's words and rhetoric incited a riot last night that killed four of his biggest fans, and one of them happened to be my sister-in-law," her brother-in-law, Justin Cave, told WXIA. "And I believe that we should invoke the 25th Amendment, to remove the president immediately."

Trump was "pleased" when his supporters stormed the Capitol, The New York Times reported, and refused to listen to advisers and Republican allies who pleaded for him to intervene. Instead, Trump released a video telling the rioters "we love you" and "you're very special."

Trump on Thursday released another short video acknowledging his election defeat and condemning the violence. Trump initially "resisted taping the video" and agreed to do so only after "he appeared to suddenly realize he could face legal risk for prodding the mob," according to the Times. White House counsel Pat Cipollone warned Trump on Wednesday that he could face legal liability.

Sherwin on Thursday pointedly did not rule out bringing charges against Trump and others who incited the riot.

A growing number of Democrats have also faulted Sens. Josh Hawley, R-Mo., and Ted Cruz, R-Texas, who led the objections to the Electoral College results during the joint sessions of Congress targeted by the mob.

Sen. Chris Coons, D-Del., a close ally of President-elect Joe Biden, said both Hawley and Cruz "should resign" on Thursday.

"Sen. Cruz, you must accept responsibility for how your craven, self-serving actions contributed to the deaths… And how you fundraised off this riot," Rep. Alexandria Ocasio-Cortez, D-N.Y., said on Twitter. "Both you and Senator Hawley must resign. If you do not, the Senate should move for your expulsion."