Marzipan in my veins: A history of the almond candy

How the shapable, almond-flavored sweet has evolved from confectioneries to Instagram feeds 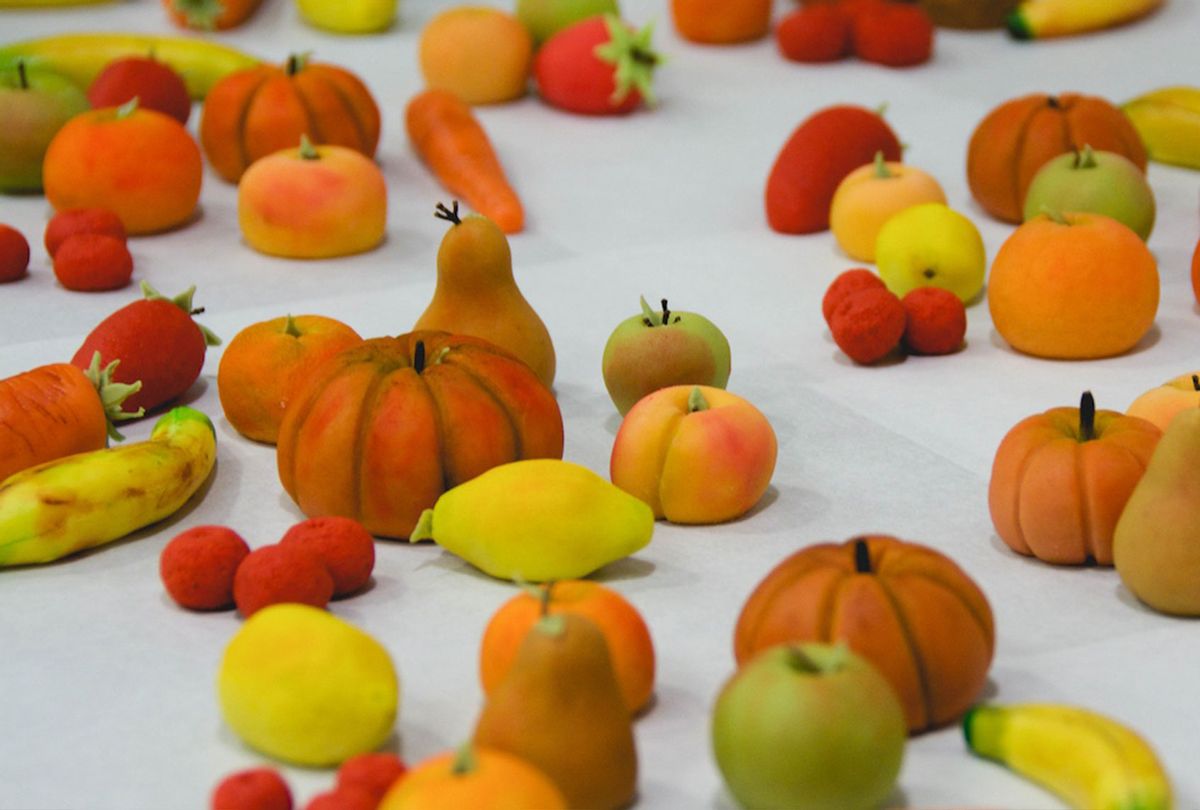 Marzipan (Photo courtesy of the Institute of Culinary Education)
--

One of my favorite moments from my ICE culinary education came from a cake decorating class with Chef Toba Garrett. Along with the layering of various types of cakes, experimentation with different icings, and practice of intricate piping skills, one day we molded marzipan to look like tiny, elegant fruits and vegetables.

An aromatic putty made from almond paste, confectioners' sugar and corn syrup was divided and dyed into different colors. By combining the colorful pastes, shaping them with carving tools, and adding details like cloves for stems, lifelike fruits took shape. Lemons had textured dimples. Peaches showed a realistic ombre of orange, yellow and red. More than just the skill development, it was the single lesson during my culinary education that most made me feel connected to my childhood and my mother's family heritage.

Even from an early age, I was suspicious of brightly colored, fruit-flavored candies, greatly preferring the earth tones of chocolate, nuts, caramel and butterscotch. There was a notable exception to this, however: fruit-shaped candies that weren't trying to taste like fruit. The term for these kinds of tricksters is trompe l'oiel, meaning "deceive the eye." Marzipan candy was extremely common in our household at Christmas time. My mother recalls the brand as being New Jersey-based Bergen Marzipan, whose samplers featured tidy rows of pears, peaches, lemons, limes, oranges and strawberries. My German-born great grandmother was nearly deaf and blind by the time I came around but could clear a whole sampler box in one sitting if left unattended. (This happened more than once.) I was still more attracted to the Whitman's chocolate sampler at that age, but now I say to my Great Grandmother Louise: I get it.

Whether or not you know marzipan in its molded, fruit-shaped form, you probably know it in some variation. Marzipan gives essence to almond croissants, king cakes, stollen and some holiday cookies. It is pliable enough to behave like fondant for covering layer cakes, as in the Swedish princess cake. It may be woven into your DNA as it is mine through any number of lineages.

Marzipan is common all over Europe, the Middle East and Latin America primarily, and to a lesser extent, parts of Southern and Southeast Asia with European influence such as Goa and the Philippines. Its wide reach and simple construction makes its origin difficult to trace: The earliest written references of "marzipan" come from Italy and Spain in the 16th century, but it is believed to have been around for much longer. There is a reference to an almond paste used as an aphrodisiac in Arabian Nights, a collection of Middle Eastern folk stories whose origins range from the 8th to the 14th centuries.

The term marzipan — from "march pane" — is widely in use now in a number of languages, but an almond and sugar variant known as postre regio in Spain has been traced to at least as early as 1150. Certain cities and regions throughout Europe claim marzipan as a specialty: Spain's Toledo (where it has protected designation of origin status), Portugal's Algarve, Italy's Palermo and Germany's Lübeck. While my sense of self and Christmas nostalgia really want Germany to wear the marzipan heritage crown, I am bound to point out that the very name marzipan has a romance language origin, not a Germanic one: pan, or pane, meaning "bread" in Spanish and Italian. (I would also point out that it is the Germans who also have a tradition for shaping marzipan like an actual loaf of bread, a Christmas confection known as marzipanbrot.)

Formulas and ratios vary worldwide, but the basic building blocks for marzipan are blanched almonds and sugar, which are ground into an emulsion and may include additional components such as honey, almond oil and almond extract. Unless it's giving flavor to another kind of pastry or hiding under a layer of chocolate, marzipan is typically molded into some kind of shape.

Many specialty candy stores in the United States carry marzipan candies, and you might even find Ritter Sport marzipan chocolate bars at conventional grocery stores and markets. Pastry chefs make marzipan fruit and marzipan cake. A recent article by Hilary Reid in New York Magazine suggests that marzipan may be finally hitting its stride in the U.S., with local confectioners stating that sales of marzipan candies have been on the rise in recent years. One thesis has to do with the intersection of Instagram and food culture; marzipan's sculpted character making it especially photogenic.

Marzipan has been in my life for several decades. I'd taken it for granted until Chef Toba's class when I started noticing just how often I gravitate to almond-flavored anything, given my early exposure to it. Now I can especially relate to how Hilary Reid sums up her fascination with it, and its ongoing appeal: "Nothing else I've ever encountered manages to combine kitsch (delightful), miniatures (also delightful) and candy (delicious)."

By Pamela Vachon, Institute of Culinary Education alum and writer