The prized Uzbeki dumplings I'd bike across the country for

And at the very least, from Manhattan to Rockaway Beach 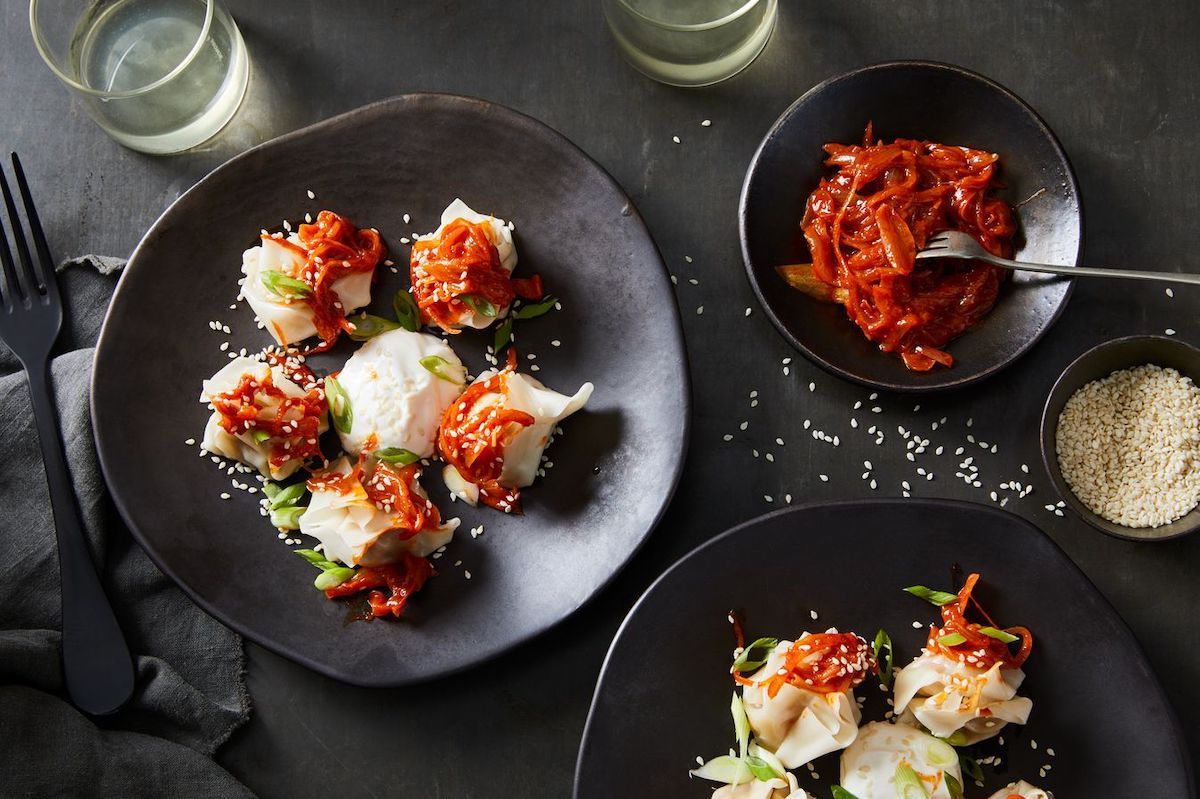 Every summer in New York, I bike to Beach 92nd Street in Far Rockaway and rush to lock up my bike in front of a large wood sign with bright primary letters spelling out "Uma's." Inside, under a bright tin ceiling, my eyes devour the Uzbeki specials on the board and follow each dish bustling out of the kitchen, my veggie-loving and meat-loving sides tug-of-warring over my order.

But the veggie-loving side of me wins every time. A round blue-rimmed plate clatters onto my table bearing the sweet, savory fruits of Uma's labor: squash manti. These little purses of steamed dough from heaven, their edges gathered around sweet, tender cubes of squash, drizzled with oil and sprinkled with onions, are worth biking 20 treacherous miles over bumpy foot bridges and bike lane-less Brooklyn boulevards.

The rich heartiness of these manti had my tongue searching for butter, or even vegan butter — of which there isn't a single pat in Uma's recipe. That fulfilling richness purely comes from the butternut squash Uma chops up, the vegetable oil she sautés with, and the hearty dough she rolls out.

Uma's opened in July 2013 and was part of the post-Superstorm Sandy rebuilding of Far Rockaway. Maybe it's partially Uma and her husband Conrad's vote of confidence in the resilience of the neighborhood, but this small sit-down restaurant has become one of the most popular and beloved dining establishments in Far Rockaway, a beach community known for its closeness.

Before opening the restaurant, Uma and Conrad hosted a series of Uzbeki dinner parties to rave reviews. Inspired and aided by Uma's aunt, an expert cook visiting from Uzbekistan, the couple perfected their menu and leaped at the sale of an empty storefront on Beach 92nd Street and Rockaway Beach Boulevard. There weren't many full-service restaurants on the street yet, and on their first day, they had a line out the door.

Uma's customers are a colorful bunch — longtime locals, transplanted young families, surfers, tourists, and day-trippers like myself (whom locals term "DFD," or "Down for the Day"). Everyone falls under the spell of Uma and her food, watching her sculpt her manti through the kitchen window. "What are those?" I'd often hear a customer sitting next to me implore their server, gazing at the plate of perfect dumplings as it goes steaming by.

But those origami-like manti weren't always as artfully shaped as they are today. "I remember my manti were really ugly when I was a kid," Uma, who learned how to make the dumplings from her mother, said. "You have to have a skill doing it, and it takes a little bit of practice, but then you make enough of them — and you just learn."

Growing up, pumpkin manti were an autumnal treat for Uma. Her mother made these special manti only once a year, during the fall pumpkin harvest. "The squash manti are so special because they're from this fresh harvest," Uma said. "Instead of beef [manti], I would always reach for the pumpkin dumplings and eat them — they were so soft and buttery. It's still my favorite. I just love the taste."

Uma's menu also includes several Korean dishes, inspired in part by a Korean-Uzbeki friend from her youth. In Uzbekistan, which has a large and growing Korean immigrant population, Korean dishes were traditionally sold in outdoor bazaars, but are now available in most supermarkets. The Uzbeki-Korean connection fascinated me, and I wondered if there was a relationship between Uzbeki manti and Korean mandu.

Like most food history, the story of the Korean mandu I grew up with is disputed. It's likely they descended from manti — and the word "mandu" probably came from "mantou," or "manta" in Chinese. Chinese mantou dumplings most likely migrated along the Silk Road east, finally reaching Korea via Mongolia. Traditionally, mandu are made with ground pork or beef, while traditional Uzbeki manti are made with ground lamb or beef. My husband's ancestral nation of Armenia also makes manti—ones that hew small, spicy, and meaty.

Mandu — and by extension, manti — are part of a cultural heritage I hope to teach to our son and pass on to him, so I experimented with making the dough. Now that I have my mom's pasta machine from the eighties and a glut of dan-hobak (kabocha) from her garden, I'm making my version of vegan squash manti for my vegetarian husband, but with one trick—with seasoned vegan ground beef or tofu.

Like the manti and the mandu's ancestral link, we find our commonalities in food traditions. For the staff at Uma's, community has kept their food traditions going and their business open.

"We stayed open during the pandemic, and people kept coming and ordering takeout and giving us enough business to stay open," she says, adding that she and her family moved to the Rockaways in 2008 from Bay Ridge. "We've become such good friends with so many people, and we are now part of this community. They're what's kept our restaurant alive."