Capitol riot moms stand behind — or alongside — their sons

Right-wing moms are defending their sons' "right" to storm the Capitol. Some even joined in 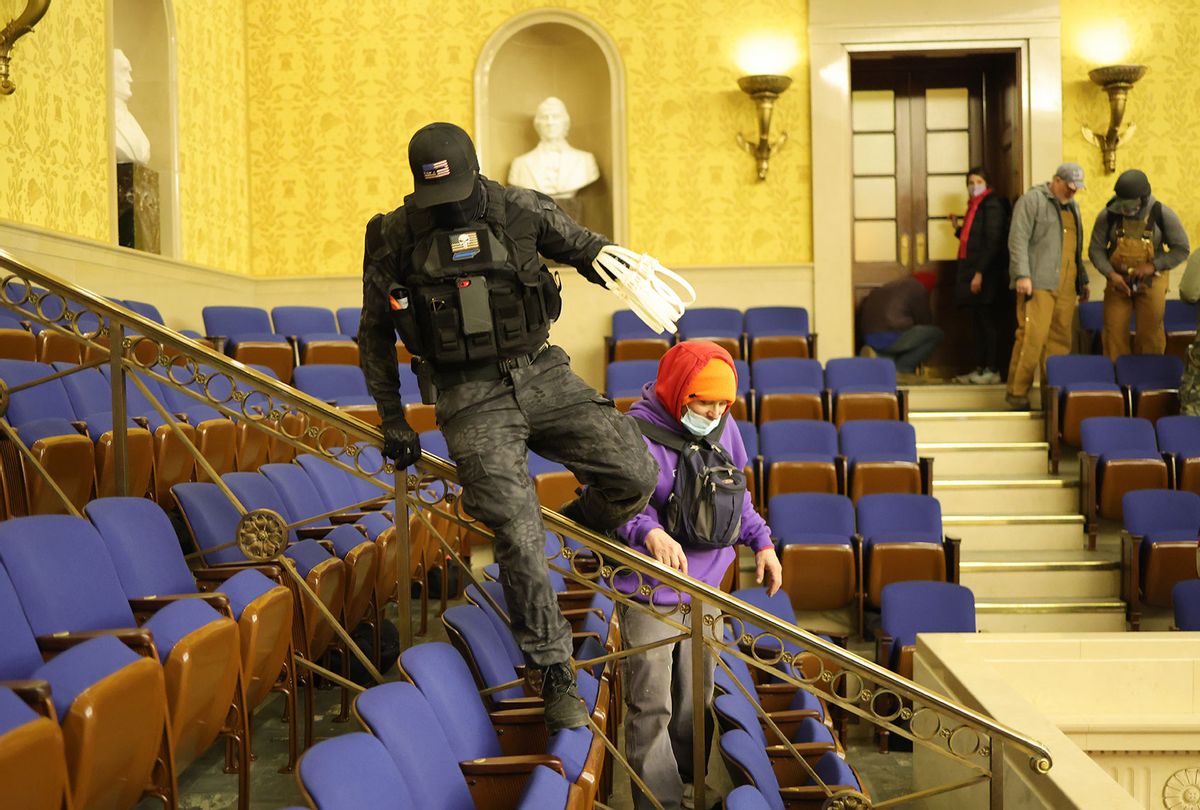 Our culture has terms for all kinds of mom archetypes: working moms, stay-at-home moms, soccer moms, wine moms and "cool" moms. But have you ever met a helicopter riot mom?

By now, you've seen the images and videos of a mob of mostly white men violently storming and attacking the Capitol last Wednesday. They broke into the building through windows or forced their way through metal barricades. They bore Trump regalia and urinated on the floors. Some were armed with guns and tasers; one man, whom the internet has dubbed "zip-tie guy," dressed head-to-toe in paramilitary gear wielding plastic hand restraints. Counter-terrorist experts say this resembled the Michigan plot to kidnap Gov. Gretchen Whitmer, suggesting there was likely a desire to "conduct vigilante justice against members of Congress." Five people are now dead because of Trump's insurrection, including a police officer and a member of Trump's mob.

Yet if you look closely at the images from last Wednesday, you'll notice that behind some of the more-photographed men, there are women lurking in the shadows. Some of them were mothers, who were supporting their insurrectionist sons on the ground.

"Zip-tie guy" was one of these men who brought his mom. Indeed, in the photo of him above, it is believed that his mom is the woman in the background. According to The Tennessean, the Federal Bureau of Investigation recently arrested 30-year-old Eric Munchel, the so-called zip-tie guy. He currently faces charges for knowingly entering or remaining in a restricted building or grounds, without lawful authority, and for violent entry and disorderly conduct on Capitol grounds. And according to the affidavit, federal authorities believe the woman he was photographed with in a hotel lobby and at the riot was his mom, Lisa Eisenhart. A Nashville Public Radio report says that his mom even booked the plane tickets for their flight to D.C.

According to The Sunday Times, a British newspaper, Lisa was interviewed expressing her far-right radical views, confirming she was with Eric, her son.

"This country was founded on revolution," Lisa told the British newspaper. "If they're going to take every legitimate means from us, and we can't even express ourselves on the Internet, we won't even be able to speak freely, what is America for?"

According to the interview, she also said: "I'd rather die as a 57-year-old woman than live under oppression. I'd rather die and would rather fight."

Eisenhart stressed in the interview that they entered the Capitol as "observers," and that her son told her not to touch anything.

Then there are the reports of insurrectionist moms swooping in to defend their sons. Jacob Chansley, 33, also known as Jake Angeli or the "QAnon Shaman," became an iconic symbol of the Capitol riot when he stormed the building donning a Viking-style horned hat, his furry vest open to his tattooed chest; photos of him inside the Capitol plastered the front pages of newspapers worldwide. Angeli was arrested after the riot, and now is being held in an Arizona detention center where he reportedly refuses to eat because he requires organic food. According to ABC 15 in Phoenix, Chansley's mom, Martha, explained that he gets "very sick if he doesn't eat organic food."

Martha Chansley was reportedly "unapologetic" for her son's role in the Capitol riot. "It takes a lot of courage to be a patriot, OK, and to stand up for what it is that you believe," Martha said. "Not everybody wants to be the person up front." She emphasized her son is trying to get people to "wake up."

Mom's support of her son's behavior is surprising inasmuch as it belies what we usually think of when we think of supportive parents. To most Americans, there's nothing wholesome about helping your son achieve an undemocratic coup. On a political level, however, the family element to the riot is not at all surprising. Anecdotally, far-right extremism is either breaking apart or uniting American families these days; many have been birthed into it, radical views upheld and passed down from generation to generation. Moms in politics get attention because they defy our wholesome stereotypes around what "mothering" means.

"There's the one image of the mother at home, you know, very quiet taking care of her business. And then there's a woman who gets mad because her child is threatened," said Katrina Bell McDonald, a retired professor of sociology at Johns Hopkins University, in an NPR interview. "And that's, I think, why people are so interested when they see mothers banding together."

Meanwhile, on the other side of the aisle, we've seen the rise of the "resistance mom" movement over the last four years, mothers fighting for economic justice or civil rights. In Portland, the so-called Wall of Moms — a group of mothers linking arms to protect anti-racism protesters as a response to the federal law enforcement officers who were tear-gassing and beating racial justice protesters — made international news over the summer.

Certainly viewing female activists through the lens of being a mother feeds into the stereotype about what a woman's worth is. But the women supporting their sons at the Capitol were insurrectionists and accomplices — women who believe they, and their sons, were doing the "right" thing.

We saw the embodiment of this on Wednesday, thanks to the helicopter riot moms.