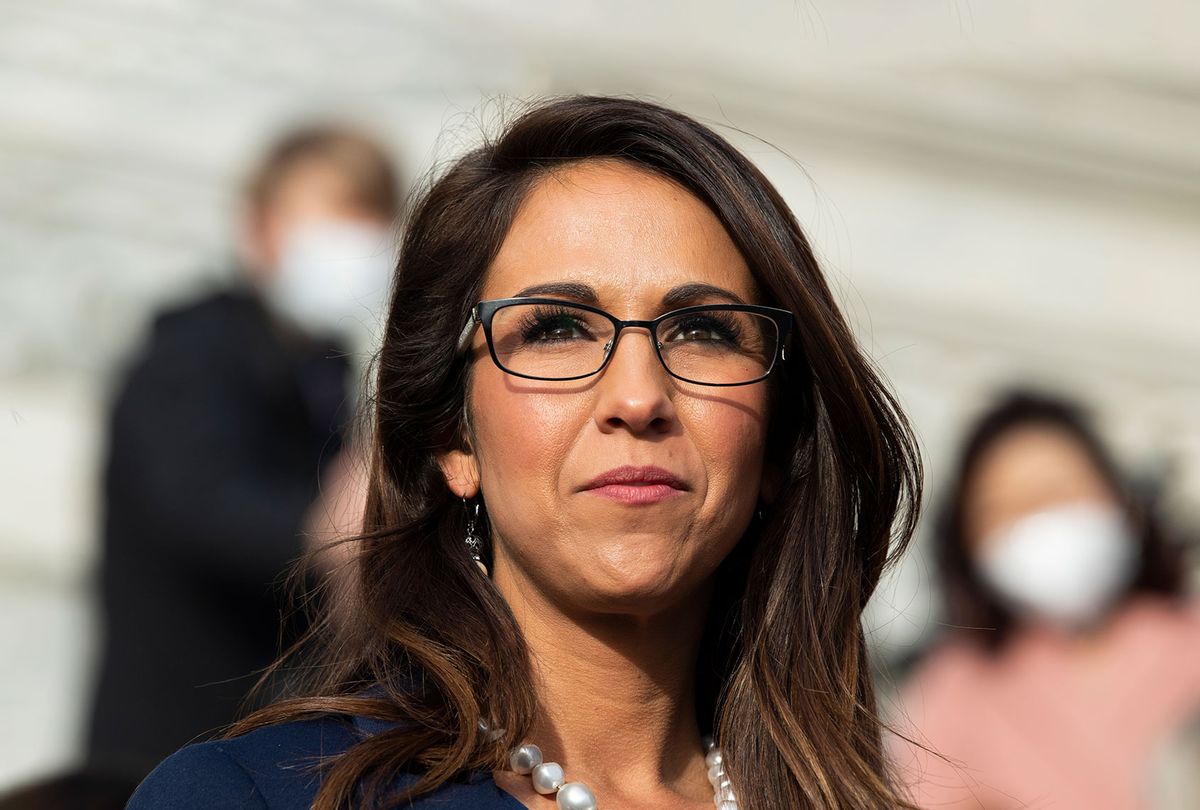 Some Republican members of Congress pushed through Capitol Police officers to enter the House floor Tuesday and Wednesday, refusing to go through newly-installed metal detectors set up after last week's deadly pro-Trump riot.

The acting House sergeant-at-arms issued a memo to all members of Congress on Tuesday warning that refusing to go through the metal detector or carrying prohibited items onto the House floor "could result in denial of access to the Chamber." But Capitol Hill reporters documented the scene as Republican members refused to cooperate with officers on Tuesday night as the House debated a measure calling for Vice President Mike Pence to invoke the 25th Amendment to remove President Trump from office.

Rep. Lauren Boebert, R-Colo., who has vowed to bring her gun to the Capitol, got into a "standoff with Capitol Police" after her bag set off the metal detectors and she refused to allow it to be searched, according to CNN's Ryan Nobles. Boebert was ultimately allowed into the chamber, although it is unclear whether her bag was searched.

A defiant Boebert insisted on Twitter after the "standoff" that she is "legally permitted to carry" her gun in Washington and inside the Capitol, even though the sergeant-at-arms stressed that firearms are prohibited on the floor and must be restricted to members' offices.

Boebert, who raised alarm among some Democrats after tweeting about House Speaker Nancy Pelosi's location during last week's siege, argued that the metal detectors "would not have stopped the violence we saw" last Wednesday, calling it a "political stunt." The metal detectors were installed after lawmakers expressed concern during a Capitol Police briefing on ongoing plots against the Capitol that "members who were in league with the insurrectionists who love to carry their guns" may aid in a potential future attack. Rep. Madison Cawthorn, R-N.C., who cheered on Trump's supporters at a rally before the riot, has suggested on a podcast that he was armed during the siege.

According to HuffPost's Matt Fuller, about 10 Republicans, including Reps. Ralph Norman, R-S.C., Scott Perry, R-Pa., and Jeff Duncan, R-S.C., "literally pushed through" the entry around the metal detectors while officers "didn't seem to know what to do." Fuller later reported that Rep. Russ Fulcher, R-Idaho, was "the most aggressive member pushing through the metal detectors" and left a female officer who "kind of got in his way" seemingly on the "verge of tears" after he "pushed his way past her." Some Republicans continued to defy the security measures and walked around the metal detectors on Wednesday as the House debated an article of impeachment against Trump.

Rep. Louie Gohmert, R-Texas, walked around the metal detector, telling officers, "You can't stop me, I'm on my way to a vote," according to Fuller.

"They cannot stop me," Rep. Markwayne Mullin, R-Okla., insisted when he was told to go through the metal detector, according to CNN's Manu Raju. Rep. Steve Womack, R-Ark., exclaimed that he was "physically restrained."

Other members set off the metal detector but were not stopped by police as they entered the House floor anyway, Raju wrote. Fuller said that all Democrats and about 80% of Republicans complied but other members caused "tension" with police.

Rep. Steve Stivers, R-Ohio, went through the metal detectors but stopped to tell the officers he believed they were "unconstitutional," Fuller reported.

"This is bullshit," Rep. Rodney Davis, R-Ill., complained as he went through the machine, according to NBC News.

Some members even took the floor to complain about the new security measures.

"I would be remiss if I didn't address the atrocity occurring right here on the House floor today," Rep. Greg Steube, R-Fla., said. "Take note America. This is what you have to look forward to in the Joe Biden administration."

"We now live in Pelosi's communist America!" she wrote.

Democrats condemned Republicans who shoved their way past police.

"All these GOP 'pro-police' slogans were never actually [about] safety," Rep. Alexandria Ocasio-Cortez, D-N.Y., said on Twitter. "It was always [about] upholding a system of state violence that targets" Black people and people of color.

Ocasio-Cortez on Instagram Tuesday recalled thinking "I was going to die" during last week's siege. She said she was particularly concerned that "white supremacist members of Congress … would disclose my location and would create opportunities to allow me to be hurt, kidnapped, et cetera."

Other lawmakers have expressed concern about potential cooperation with rioters inside the Capitol. Rep. Jim Clyburn, D-S.C., has questioned how rioters found his unmarked office but did not enter his main office, which bears his name on the door. Rep. Mikie Sherrill, D-N.J., said in a video that unidentified members of Congress "had groups coming through the capitol that I saw on January 5 for reconnaissance the next day," though she did not detail any evidence or specifics. The chief of staff for Rep. Ayanna Pressley, D-Mass., told the Boston Globe that every panic button in the congresswoman's office had been inexplicably "torn out" before staffers were forced to hide inside during the lockdown.

"Do these people not understand that literally everyone else has to go through metal detectors to get in here?" Rep. Don Beyer, D-Va., questioned after the Republican protests. "Average people do not get to bring guns into the United States Capitol in normal times. Get over yourselves."

Many of the Republicans who refused to comply with the new metal detector requirements previously voted for a 2018 bill to set up metal detectors in schools in response to school shootings, including Stivers, Gohmert, Davis, Mullin and Womack.

"Now they know how [high school] students in my district feel," Rep. Rashida Tlaib, D-Mich., tweeted. "Suck it up buttercups. Y'all brought this on yourselves."