I bought an electric knife sharpener, and you should, too 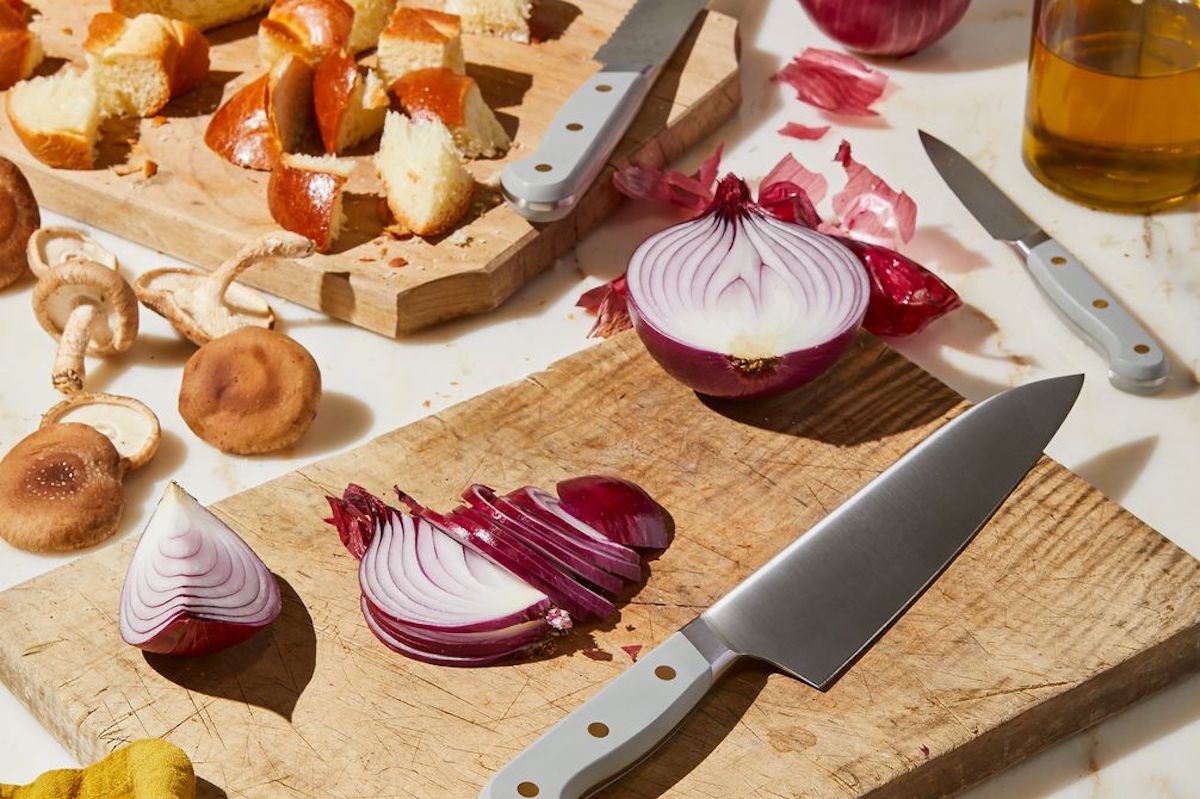 Any professional chef will tell you that good knives are only to be sharpened manually and with a whetstone — electric knife sharpeners are for the uneducated, who don't truly care about their tools. So like any self-respecting cook (someone who interviews chefs for a living!) I never deigned to purchase a knife sharpener. Instead, I bought a whetstone, found it impossible to use, stuck it far away in a drawer, and subsequently got my knives sharpened by a professional every three months or so (honing daily in-between).

This strategy was working quite well for me, until the world was placed into quarantine. My day job of filming a public TV show about food was replaced this spring by becoming a glorified in-home chef/cleaner for my family, a homeschool prisoner/teacher, and the kind of person who does daily Instagram Lives cooking with her son just to have a reason to get dressed. As the days and weeks dragged into months, I was suddenly faced with a new problem. My daily knife honing was no match for knives that required sharpening.

I thought long and hard about pulling the whetstone out from its hiding place, but after watching one too many YouTube videos about the precision and practice necessary, the idea of failing at another facet of my current life was deeply unappealing. So, I went down the rabbit hole of electric knife sharpeners. All the critics were there, loud and clear. Knife sharpeners are less precise than a stone. Knife sharpeners remove more metal from your knife, dramatically reducing its lifespan.

But the arguments start to break down for me when I considered the normal lifespan of a knife, even for the most active home cooks. Let's be clear: I am not slicing sushi-grade tuna or breaking down animal carcasses. I am not planning to pass my knives on to my grandchildren. They aren't heirlooms crafted by an artisanal metalworker. They are higher-end, very serviceable, commercially available knives. Their cost is roughly equivalent to the amount I spend every three years on sharpening them. I was spending more money while I wasted my time dropping my knives off for a day to be sharpened, rather than secretly accepting the shame of being a food journalist and cookbook author who happens to use an electric knife sharpener.

In this new brave world of quarantine, I was happy to accept a bit of shame in exchange for the pure joy and culinary power of a freshly sharpened knife.

Most reputable outlets recommend the same knife sharpener — the Chef's Choice Trizor XV — so I put in my order, and eagerly awaited its arrival every time I went to cut a tomato with a serrated knife. When the day came, I pulled the machine out of its box and looked it over. It has a simple design and a logo that looks straight out of the eighties. But the instructions made it seem easy enough: Pull the knife through three sections that sharpen, hone, and polish. Three steps, and your knife will be sharp again. I took out one of my least favorite knives and put it through each stage. It was extremely loud and sounded like my knife was being eaten. But when it was done, I took my knife to a tomato and it easily slid right through. My knife was sharp! It did not look smaller or ruined in any way. I quickly took the plunge, and put every knife that needed sharpening right through the process.

As the months wore on and the summer allowed for more stores to reopen, I had a choice to go back to my professional sharpeners. But by that point, I had admitted to myself that I was in fact a convert.

Despite my newfound secret sharpener love, I knew the existing reasons against it remained the mainstream professional opinion. So I reached out to the professionals to get their take—the first step in coming to terms with laziness. A lot of chefs I reached out to politely said they had nothing to contribute to the conversation (a.k.a., not a chance of sullying their knives' reputations by even thinking about an electric sharpener). But Hiroki Odo of o.d.o by ODO was game to explain why his needs — as a chef at a Michelin-starred Japanese kaiseki restaurant—should of course be different to a consumer. As he explained, "Chefs use many different knives depending on the ingredients. There are specific knives for meat, fish, vegetable[s]. There are different knives for different types of fish. Home cooks typically use the same knife for almost everything." And, he pointed out, that knife is typically even made of a different material. He recommends home cooks use, "a stainless steel knife. Chefs tend to use knives made with iron, but if you don't maintain and polish the knives every day, they will rust very fast."

I was buoyed by his lack of judgement. But what about someone who has devoted their life to knives? I hopped on the phone with Tara Hohenberger of Chubo Knives to get her take. She was, understandably, more cautious in her outlook. For anyone who has invested in a higher-quality knife, the risk of a sharpener is that you have no idea what you are actually changing. "Japanese knives are often not equal on both sides. Not every knife is designed at the same angle." When you use an electric sharpener, "you can't see what's happening in there. You could mess up the good edge that was established and you're taking off more material than is necessary."

Her recommendation is to commit to taking proper care of your knives, but to start by setting yourself up for less sharpening. "Consider the type of steel your knife is made of: harder steels maintain their edge longer. Then minimize damage with your cutting board. We recommend using soft rubber or end grain wood. That prevents the knife from being damaged every time it hits the surface of the board." By her estimation, a home cook could sharpen every two to six months (depending on how often you cook), and using the stone should only take 10 to 20 minutes. For anyone looking to pick up a new skill in the new year, there are tons of resources online to help take the guesswork out of using a stone.

The adage says that a sharp knife is a safe knife. I completely understand that taking the extra time to sharpen properly is the best course of action. But I also think it's OK to recognize that sometimes we don't have the time, energy, or inclination to take the superior route (see: every diet ever; leaving dishes in the sink; wearing that pair of socks with the holes in them because you haven't done laundry yet). I have spent my entire professional career learning about food, writing about food, and teaching people about food. If I don't want to put the effort into a whetstone, I imagine most non-professional cooks feel the same way. Yet we all need sharp knives to cook effectively. Snobbery has always been a part of food — from demanding higher-end ingredients to denigrating freezers and microwaves — and knives have become another cult to follow. For those who want to, I applaud them for their commitment. But it doesn't have to be right or wrong. We can all pick our priorities.

I will argue until I'm blue in the face about the differences in quality of mass-produced versus small-batch cheeses, but it doesn't make someone love Kraft singles any less. We can have certain items that we geek out over, and others that we don't. And the truth of the matter is that I'm not a chef — I'm a home cook who learns from chefs. My job is to teach other home cooks who are just as frazzled, time-constrained and limited in their resources, just like me. And what a home cook needs more than any fancy knife is a simple, sharp knife. For every person researching and purchasing an expensive, hand-crafted knife there are 5,000 others just trying to figure out how to keep their regular knife sharp enough.

So sure, I wish I had the time and energy to practice manually sharpening my knives until it became second nature to me. But for now, I'm going to use my electric knife sharpener. And having a sharp knife will be worth it all.

Get To Know Your Knives A Little Better